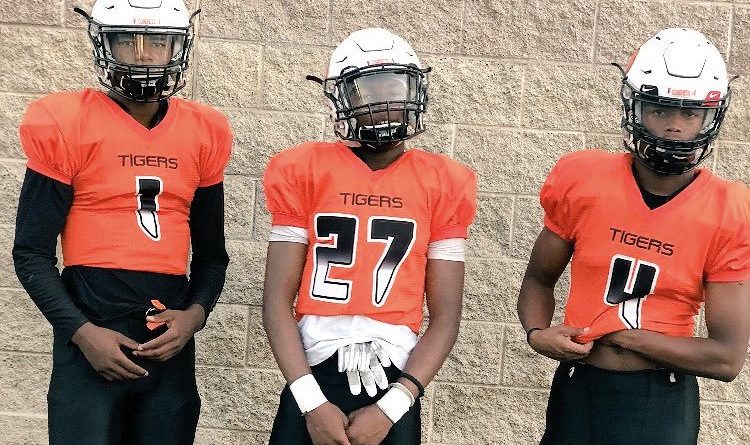 San Jacinto quarterback Kajiya Hollawayne (No. 1) is arguably the best QB in Division 6. Here’s an inside look at the 2019 Tigers.

Aric Galliano is entering his sixth season as San Jacinto’s head coach. He is 38-10 overall.

Hollawayne, a 3-star recruit, is ranked as the 18th best dual-threat junior quarterback in the country by 247. He’s already received offers from UCLA and New Mexico, and is likely the top QB in Division 6. Last season as a sophomore he threw for 3,150 yards and rushed for 616.

Last season, Denny led San Jacinto with over 1,100 rushing yards and 18 rushing TDs. He’s also a threat to catch the ball. At close to 6-foot and upwards of 200 pounds, he’s a threat to run you over.

Williams had over 500 receiving yards last season as a sophomore. With leading downfield threat Kaleb Hervey gone, expect a breakout year from the speedy receiver.

San Jacinto returns most of its starters (6 on offense, 9 on defense) after an excellent season in Division 7. The Tigers explosive offense is highlighted by an elite QB/RB tandem in Kajiya Hollawayne and Juan Denny. Wide receiver Damonce Williams gives Hollawayne a downfield threat and guard AJ Ojeda returns to anchor the offensive line.

Defensively, the Tigers’ identity is swarming and fast at both the line of scrimmage and the secondary. With nine starters returning, their defense projects to be arguably the best in division. Sheldon Newton and Kelvin Davis lead the defensive line, and Davon Banks, Keith Hunter, and Kameron Rocha make up an excellent defensive backfield.

With the core intact from a team that made it to the Division 7 championship game, San Jacinto should be in the hunt for the D-6 title in 2019.