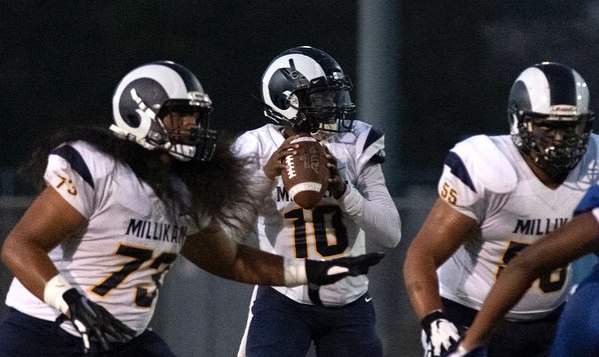 New head coach Romeo Pellum takes over at Millikan as they make the jump to Division 6. Here’s an inside look at the 2019 Rams.

Romeo Pellum is entering his first season as the head coach at Millikan.

Any time a team returns a linebacker who already recorded over 100 tackles in a season, look out. Robinson-Little not only recorded 109 tackles (24 for loss) but also saw occasional touches as a running back.

As a junior, Campbell-Caldwell threw for 1,832 yards and 20 touchdowns while only throwing four picks. His QB rating was an excellent 107.8.

Last season, Eli Noa made 55 tackles, 15 of which came for loss. He also recorded four sacks and led the team with 13 quarterback hurries.

The Rams appear headed for a rebuilding season after losing a very talented senior class and head coach Justin Utupo. They are coming off an outstanding season in which they were the only team in the Division 7 playoffs to give Culver City a game.

New head coach Romeo Pellum will rely heavily on senior quarterback Qeanu Campbell-Caldwell to guide an inexperienced offense. Senior wide receiver Nathan Martinez will be counted on to shoulder a heavy load in the passing game.

Defensively the Rams will count on senior linebacker Joshua Robinson-Little to stuff the run and senior defensive end Eliuta Noa to get after the opposing quarterback.