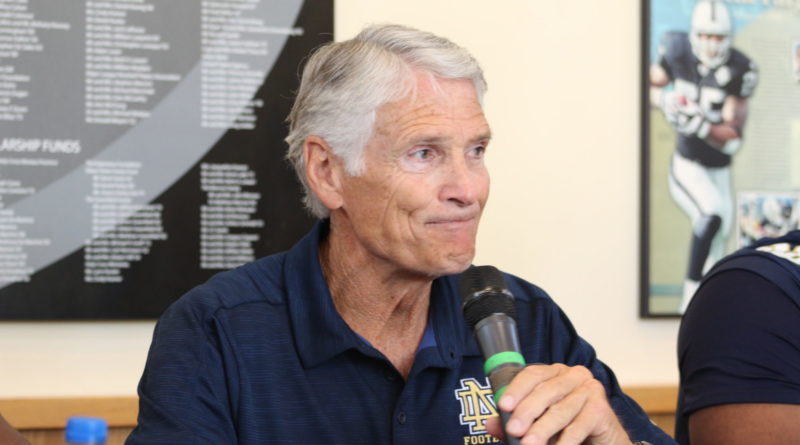 In the last week the Trinity League and Mission League — arguably the two best leagues in the state of California — have put on football media days. Both events featured head coach panels where all six coaches sat together and answered questions from the media.

While most of the questions revolved around the upcoming season, there was one topic on everyone’s mind: the transfer situation.

With the Southern Section transfer committee meeting coming up on August 14, I asked the coaches what they would propose if they were on the committee. Their responses are below.

“I think they should talk about allowing that after the ninth grade, kids are free to go. Sometimes kids make mistakes and I think they should be able to go without restriction. Every program is not for every guy and we’ve lost players and we’ve actually asked families to leave. I had a kid come here a few years ago and he said that my personal trainer says I shouldn’t squat. … I said what you should do is either squat or find a program where they let you not squat, which is what he did, which was fine.”

“Who’s legislating, you know? Did they ever play a down of football? Did they ever swing a baseball bat? I don’t know. They sit in rooms, they create rules, but they don’t even enforce their own rules. That’s the key. Monitor the process. Whatever the process is we’re going to follow. Whatever rules they pass, whether we agree or disagree, that’s our responsibility as educators. Whatever the rules are, we’re going to adhere to the rules. Unfortunately the schools that are sitting up here have the screws on tight on them and we’re the ones that are being watched, and then you’ve got the wild-wild west show going on at other schools, but they’re not relevant. We’re relevant and none of us are stupid enough to do something that would put ourselves, our program, or the reputation of our school in jeopardy. I believe that. The men who are sitting at this table are good, solid, ethical men who believe in their products. … Create rules that are enforceable.”

“If we were allowed to have a little bit more flexibility and vet players we could probably say he’s not a good fit. Sometimes [kids] get in before you even know about it. That has happened. All of a sudden you’re going, if I had known about this I could’ve gotten in front of it and shut it down because then I would know this kid’s not a good fit. There are only certain kids who are going to be Monarchs.”

“Our belief in our school and in our athletic programs is to play with the guys that showed up as freshmen and we believe in our ability to develop kids both academically, socially, athletically, spiritually and it’s a four-year program. It’s not a one-year program. We take pride in the fact that our kids improve a great deal from when they’re freshmen to when they’re seniors. They transfer in as seniors, they’re not really getting that opportunity. … I’d like to see the rules change so that it’s harder to transfer and that kids have to sit out a year if they transfer. I think that’s the right way to do it.”

“We just basically follow the rules. We aren’t the ones that implement the rules or put them in place. That is done honestly by the member schools in the CIF Southern Section and is voted on by the principals. Last time I checked, we didn’t even get a vote on transfer eligibility rules and how it’s going to all play out. …Whenever the Trinity League has an idea or an option to do something people kind of run the other way. If the Trinity League wants this then we probably don’t want it, so sometimes I think we’re on the other side of things and it becomes difficult for our league because they think that anything we agreed to is going to give us a competitive advantage.

“At the end of the day, all six of our schools lose as many kids as we gain and a cultural fit is important. My daughters are going to go to the school where I feel is in their best interest. … I think as long as the principals, whether it’s public or private, and the CIF Southern Section work together to try and make sure that we’re enforcing the rules which are voted on by those principals of the member schools we’re doing the right things. And the last time I checked transferring is legal and we’re going to continue to welcome kids into our school and our program, and that’s no different whether it’s at the high school level, college level or free agency in the NFL level. It’s all over the place and we as coaches have rights to move from school to school; many of us have and kids have that right as well.”

“I would love to see it tighten up. I think one of the biggest issues, probably bigger than the social media or the phones, and someone alluded to it earlier, sometimes when things don’t go well, the quickest and easier answer is to move on and I feel like for the kids developmentally at that age, it’s really important for them to figure things out and fight through them and they’ll uncover a different person on the other side of it all. Sometimes we’re skipping that, we’re circumventing that. That’s one of the values of football or of any sport … you’ve got to go back out there and fight your way through it. … I would like to see kids have to stay where they’re at after a certain point and learn how to fight and become resilient.”

“When I went to Colorado, there it’s really school choice. You can pretty much go where you want and what I found was that it was a really great thing for the kids. You saw kids grow and get to a place where it was a good cultural fit for them. I think it’s great. It really helps schools become better. There is a little bit of a competition to have the best educational program for everyone. That just helps our kids and there’s nothing wrong with that.”

“I don’t have an idea about what the legislation should look like but I think all of us up here are parents as well and I have a hard time when somebody legislates what I think is best for my son or daughter. That’s really what it comes down to. If I think my son should be at School A and the legislation says he can’t be at School A then you’re taking away my parental rights. … I have a hard time with somebody coming in and telling a parent what’s best for their child.”

One thought on “Trinity and Mission League football coaches weigh in on transfer situation: ‘I’d like to see the rules change so that it’s harder to transfer’”