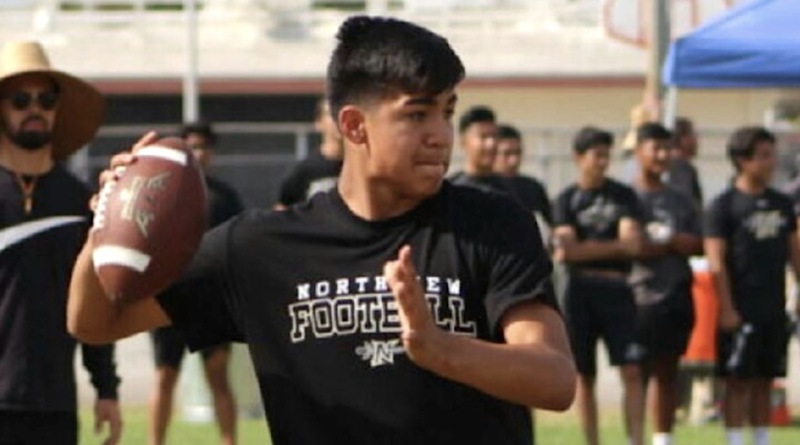 Scorebook Live’s 2019 Southern Section high school football preview continues with a look at Division 7, which is comprised of 21 schools.

Culver City ran through the D-7 field in 2018. The Centaurs beat San Jacinto 61-21 in last year’s title game. Both teams have been moved out of the division this season.

Northview returns one of the top players in the division in quarterback James Jimenez. The rising senior led Northview to the D-7 semifinals in 2018. He threw for 2,646 yards and a whopping 36 touchdowns last season. One of Jimenez’s favorite targets, Jamier Johnson, transferred to Muir, but junior Deshon Thompson is back. Thompson was a 1,000-yard receiver last season and has a scholarship offer from Utah State.

Vikings’ head coach Marcel Perez is excited about 2019. “We should have a good season,” he told Scorebook Live California.

Valencia (Placentia) was a Division 7 semifinalist as well a season ago and the team returns 13 starters for 2019. The Tigers bring back the majority of their starters on the offensive and defensive lines. Carson Elmasry will lead the d-line. The 250-pound DT made 48 tackles last year. Elijah Oropeza is back at running back after a 441-yard and four touchdown junior season. He also plays linebacker.

West Ranch had a season for the ages in 2018. Led by quarterback Weston Eget, the Wildcats made the Division 6 quarterfinals and posted a 9-3 record. Weston’s brother Walker Eget will take over under center in 2019.

Last year’s West Ranch team was littered with impact seniors. The question for head coach Chris Varner and the rest of his staff is can this group build on last year’s success despite it looking like a rebuilding year?

Arcadia lost a 38-35 heartbreaker to Kaiser in last year’s Division 8 championship game. To make matters worse, the Apaches lost their starting quarterback, Dylan Guerra, to Warren this spring and had a ton of seniors graduate. Nashawn Keith will anchor Arcadia’s defense in 2019. He finished 2018 with 14.5 tackles for loss. On the offensive side, Mikey Hillard will take the reins at QB.

Alta Loma fell to Arcadia in the D-8 semi’s 62-27 a season ago. The Braves return just two starters from last year due to graduation and players transferring. Head coach Mark Pasquarella will rely on a large number of sophomores this season led by running back Braden Lynch.

Burbank was a Division 5 playoff team in 2018. Running back Isaac Glover returns after rushing for 497 yards and seven touchdowns a year ago. Linebacker Max Mendieta is back too; he made over 100 tackles last season.

Temecula Valley is in the midst of a quarterback battle, but the team is strong in other areas. Running back and safety Brody Hughes is back for his senior season. He holds 10 Division 1 scholarship offers. Linebacker and UCLA commit Jay Max Jacobsen returns too. Temecula Valley lost in the Division 8 quarterfinals last season 21-19 to Santa Ana.

Elsinore returns seven offensive starters from a team that lost 42-40 to Valencia in the first round of the D-7 playoffs last year. Gemini Batimana is back for his senior year after rushing for 518 yards and seven TDs in 2018.

Cypress returns arguably the top offensive player in the division in senior running back Isaac Hurtado. As a junior, Hurtado was named the Offensive MVP of the Empire League. He holds five D-1 scholarship offers. The Centurions return seven starters on each side of the ball. After a 5-6 season a year ago, expect Cypress to contend in 2019.

Fullerton went 4-7 last year and lost a lopsided game to Oxnard Pacifica in the first round of the D-6 playoffs. Cameron Williams returns for the Indians under center in 2019. Starting running back Arthur Shaw is back too. He rushed for 751 yards and 11 TDs as a junior. Defensive back Donavan Plante will lead the defense after making 42 tackles and recovering two fumbles in 2018.

Huntington Beach lost in the first round of the Division 6 playoffs last year. QBs Brady Gardner and Brandon Cannella each played as juniors and return for their final seasons with the Oilers. Last season as a junior, Christian Moore contributed at tight end and linebacker. He caught five TDs and made 10 tackles for loss.

Woodrow Wilson took third in the Moore League and made the D-6 playoffs in 2018. Ryan Pettway will once again start under center for the Bruins. He threw for 1,675 and 16 touchdowns last season. Receiver Tyrie Robinson is another name to remember. As a sophomore, he caught 44 passes for 354 yards and three scores. Linebacker Brett Dowgiewicz and defensive back Soloman Bowie combined for over 180 tackles as juniors.

Don Lugo was a Division 5 playoff team last season. As a sophomore, Gary Garcia was the team’s leading rusher, but he’s not listed on the team’s 2019 MaxPreps roster. That would be a big loss for a run-heavy Conquistadores squad. Junior Joseph Galindo is back at safety for Don Lugo though. He broke up 12 passes and made over 60 tackles in 2018.

Fountain Valley has a new coach in Chris Anderson. He told Scorebook Live California that he expects the strengths of his team to be the offensive line and their athletic defense. Here are the players to know on offense: Blake Anderson (WR), Moses Atuatasi (OL), Fernando Silva (OL), Brad Sweeney (OL), Joseph Tallabas (OL). And here are the players to know on defense: Jerry Ngo (DB), Carlos Salazar (LB), Tanner Ciok (DB), Derek Kubota (DB), and Moses Atuatasi (DL).

Quartz Hill had a down year in 2018, finishing 3-7 following 2017’s section championship. Left tackle Julian Clemons is the Rebels’ top prospect. He’s in charge of protecting quarterback Bryce Dickson. That dynamic will be key as Quartz Hill looks to get back to its winning ways under sixth-year coach James Vondra.

Here are our projected top-5 teams in Division 7, in order of how we think they’ll finish: