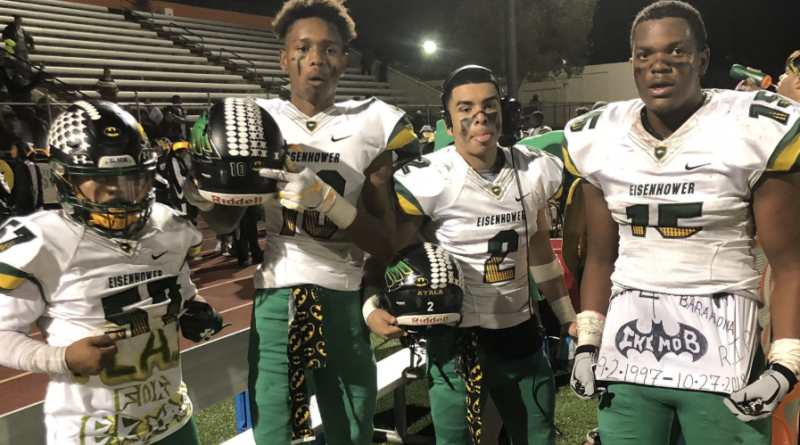 Scorebook Live’s 2019 Southern Section high school football preview continues with a look at Division 10, which is comprised of 23 teams this season.

Last season, Eisenhower defeated Highland 35-18 in the D-10 championship game. Eisenhower looks to repeat as Division 10 champs while Highland has moved up to Division 9.

Reigning D-10 champions Eisenhower might be the favorites to repeat. The Eagles went undefeated through the Southern Section finals last season before finally narrowly losing to Kaiser in the state playoffs.

Up from Division 11, Western is the other heavy favorite to win the division. Western won the 2018 D-11 championship in utterly dominating fashion, outside of a one-point victory over Beaumont in the semifinals.

The Pioneers lose QB Anthony Munoz, who threw for an unfathomable 5,010 yards last season, which was an Orange County record. But they return their two leading receivers, twins Caine and Cassius Savage. The two combined for over 3,000 receiving yards last season, and headline an elite defensive core as well.

Another potential contender is a quarterfinalist from last season, Simi Valley. While they are losing most starters on both sides of the ball, they believe in their young talent. Head coach Jim Benkert is excited about both the size and chemistry this year’s team has displayed so far.

Down from Division 9, Segerstrom is another dark horse contender for the D-10 title. Segerstrom will return their league’s offensive and defensive players of the year in QB Angel Vega and LB Rey Garcia. Vega broke the school passing touchdown record as a sophomore with 24. Iverson Fuiava (WR) returns as a senior having just broken the receiving touchdown record as well.

Segerstrom returns five starters on defense, including some of their biggest contributors. Star DE Saul Ramirez and MLB Israel Escobedo join Garcia on the defensive line. And the secondary also projects to be a strength with Fuaiva (who also plays FS) and Farid Partida (SS) returning.

Crescenta Valley poses a big threat this year after making the playoffs last season in Division 7. Star dual-threat QB Cole Doyle will be tough to replace offensively, and it remains to be seen who will emerge as primary playmakers. However, a host of great receivers return – WRs David Baek, Colby Rees and Angel Ochoa will all be seniors this year. Also returning is junior TE Sebastian DeLeon.

Defensively, many of the Falcons’ best players will return as well. DeLeon (MLB), Rees (CB), and Ochoa (OLB) all double as major contributors on that side of the ball. Also returning are linemen Chase Center, Chad Ruf, and Jaden Haas. Defensive backs Vincent Parrott and P.J. Weinmann will be back as well.

Down from Division 8, Katella’s only loss last season came in the divisional quarterfinals against Alta Loma. While longtime head coach Fred Di Palma is confident in his team’s overall experience level and mindset, every single rotation skill player from last season graduated. Having lost seven starters on offense and six on defense, their rotations are still solidifying.

San Marino was only one touchdown away from making the Division 9 semifinals last season. The run-happy Titans lost their two leading rushers from, and all of their receivers, but return dual-threat QB Connor Short.

Experience might be an issue as their defense was heavy on seniors as well. However, they are returning an elite LB in Seth Matzumoto, and top free safety Neven Yarahmadi.

The Braves lost a lot of playmakers, but Eddie Allain has three more years left of high school.  That’s not something you can often say about someone who has already rushed for over 1,500 yards and 23 touchdowns. Josef Luckey and Gabriel Koshmerl also return at RB.

Peninsula is another likely playoff contender in Division 10 that may fly under the radar. While Western won convincingly, Peninsula more or less cruised to the D-11 championship last season. Offensively, almost all of their skill position players in last season’s rotation were seniors. However, the Panthers will probably have one of the best and most experienced defenses in the division this season.

Joining D-10 this year is West (Torrance), who went 4-1 and made the playoffs last year in Division 9. The rush-happy Warriors return top backs Xerxes Reamer and Jacob Moreno, and a lot of talented juniors on their defensive line.

Big Bear went 9-2 last season in Division 9, and 3-0 in league, but will drop down to D-10. While they lost most of their playmakers, Paul Domingue returns as a top RB who can catch as well. They also return an excellent two-way lineman in Glen “River” Monroe.

Pomona went 4-0 in league last season and made the Division 11 quarterfinals. The Red Devils lost a monster QB/RB/WR trio in Daniel Limon, Billiante Godfrey and Perish Ways. However, they do return senior WR Jimmy Brown and an intriguing sophomore RB/WR in Matthew Moore.

Dropping down to Division 10 this season is Heritage Christian, despite going undefeated in D-9 until the playoffs. The Warriors are yet another D-9 team that prefers the run game. They return senior rushers Tommy Sykes (SB) and David Rozo (FB), in addition to top receiver Tyrus Nairn.

Sykes (FS) and Rozo (OLB) are also among the returners on defense. Additionally, Heritage Christian returns last season’s second and third leading tacklers in Michael Polio (OLB) and David Kim (DE). Along with Sykes and Rozo, both linemen play both ends.

Montebello also drops down from Division 9 after going 4-1 in league and making the playoffs. While it’ll be difficult to replace an excellent QB/receiver tandem in Richard Placencia and Bryan Martinez, they do return one of the division’s elite rushers in Eduardo Gonzalez. They lost a lot of seniors defensively, but a number of major contributors return. Those include seniors Pablo Mosqueda (MLB), Gabriel Loaiza (DB), Jordan Duncan (CB), and junior FS Andre Maldanado.

JW North joins D-10 from Division 8 despite a 4-1 record in league and a playoff appearance. The Huskies lost a number of key playmakers but still have a ton of young talent offensively. Despite being 5-foot-8, Venasio Mikaele weighs in at 200 pounds. He ran for almost 1,100 yards last season as a freshman. Also returning are WRs Coryon Rayford and Jadon Adams.

Lastly, Agoura also joins Division 10 after a playoff appearance in Division 8. WRs Jake East (sophomore) and Max Lopez (junior) are back along with Jacobee Taylor (WR) and Ryan Rowe (RB). Taylor and Rowe are returning seniors.

Defensively, the Chargers lost some key cogs, but one of the league’s top linebackers, David Kempton (MLB), returns. East was also one of the team’s leading tacklers last year.

Here are our projected top-10 teams in Division 10, in order of how we think they’ll finish: