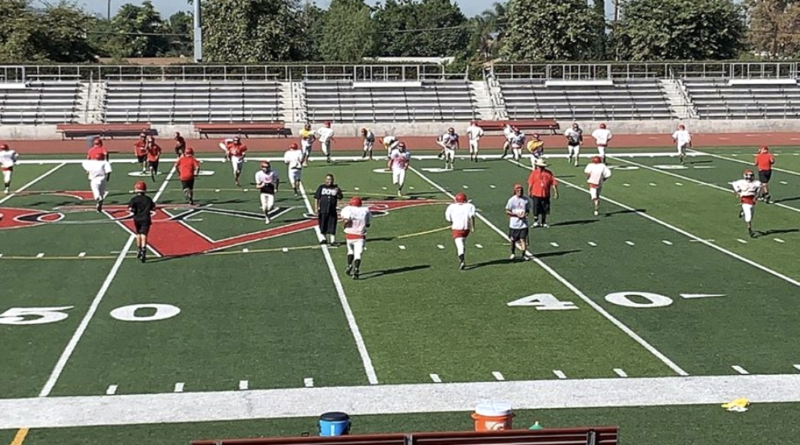 Over the next three weeks Scorebook Live California will roll out a comprehensive Southern Section high school football preview.

Our in-depth look at SoCal high school football will include team previews, player rankings, predictions, polls and much more. Our preview begins with a look at Southern Section Division 14.

Division 14 features a total of 66 schools in the Southern Section. This is the first year the section will crown a Division 14 champion due to changing the Division 1 and 2 playoff format.

Sierra Vista has the top player in the division in junior defensive end Nick Dimitris. Dimitris holds scholarship offers from seven Division I schools, but is a bit of a mystery man. He played one game for California City in 2018 before coming to Sierra Vista this offseason. Dimitris has practiced so well this spring/summer that college coaches can’t help but recruit him.

Last season the Dons went 0-10 under head coach Fabien Castillo. This offseason Sergio Villasenor was named head coach; he’ll coach alongside his son Matt. The duo is known for producing high-flying offenses that will put up points. A year ago the Villasenor’s were at LA Wilson where they set several school records. Expect the Dons to look totally different in 2018. O-lineman Giovanni Gallardo will be the team’s leader on offense.

Mary Star of the Sea will once again be run-heavy in 2019 with running back Giovanni Rizzo. He rushed for 325 yards and six touchdowns in six games last year. Marco Ibarra is the new starting quarterback for Mary Star. Two-way lineman Jesse Tello, the 2018 Camino Real League lineman of the year, is the Stars’ top prospect. Mary Star went 7-4 last season and lost in the first round of the Division 13 playoffs to eventual champion Linfield Christian.

Granite Hills went 7-3 last season. The Cougars lost to eventual Division 13 champion Adelanto 28-25 in the last game of the year. Granite Hills should compete in Division 14 if they’re able to make it out of the Desert Sky League.

Many Division 14 teams are in a similar position to Perris High School head coach Michael Mesa and his football program.

“We are a new program,” Mesa told Scorebook Live California. “We have no expectations other than to work hard and compete as best we can.”

Most of the teams in Division 14 are newer programs with middle-of-the-road expectations.

Verbum Dei head coach Marquis Bowling told Scorebook Live California: “We are very young so we don’t have five top players on each side of the ball.”

Bowling mentioned Nathaniel Nelson as a player to watch on offense and Jamaine Adams and DuJuan Bowen as players to watch on defense.

Capistrano Valley Christian at The Webb Schools, Oct. 19 at 1 p.m.

Here are our projected top-10 teams in Division 14, in alphabetical order: