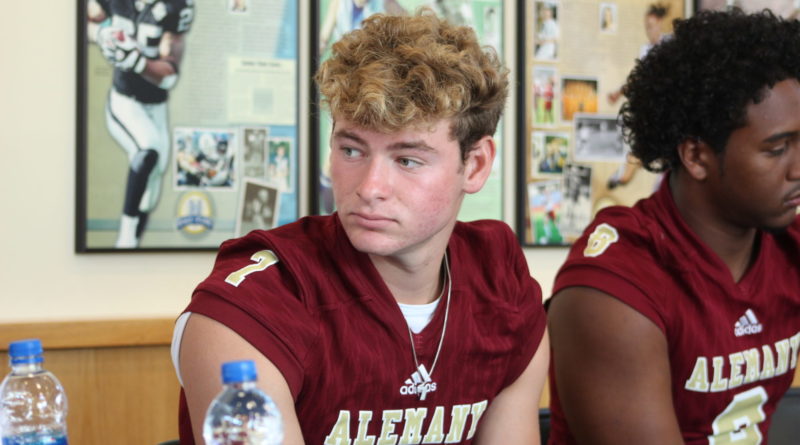 This comes on the heels of the Trinity League hosting its first ever football media day last week. Coaches and administrative members from both leagues voiced their approval for how the two events promoted their student athletes.

Part of what makes Mission League football great is that most seasons are unpredictable, and have no clear favorites. This season, at least three of the six teams within the league have a feasible shot at the title. And while Mission League teams are rarely on the level of national power Mater Dei, their best teams can compete with anybody.

Coach Steve Hagerty made no bones about it that last year’s champs expect to contend again for a league title. The Lancers went 9-2 in 2018, and 5-0 in league play. And in his opening remarks, coach Hagerty said he expects this year’s squad to be on the same level.

Bishop Amat will likely suffer from losing almost all of their offensive playmakers from last season however. Outside of WR Kyran Hayes, no other skill position players who significantly contributed for Amat are returning.

Luckily though, the Lancers are getting Cal commit and star RB Damien Moore back from a season-ending ACL injury. Moore is confident that he’s 100-percent ready to step back in and play at a high level.

Amat will be returning less than half of their starting defense as well. Hagerty pointed out that his defensive coordinator Mike DiFiori is as good as it gets though and the sense was that the staff has immense confidence that they’ll pull it together on that side of the ball regardless of the inexperience.

Bishop Amat will rely on DE’s Ethan Rodriguez and Elijah Ponder, both of whom have received Division I offers, to take steps forward in 2019. They’re also expecting big things out of Dyson McCutcheon.

Loyola’s football program has definitely lost its way in the past five or so years. Being in the Mission League is tough, and last year’s 1-9 record would’ve translated to more wins in many other leagues, but there’s no denying those results aren’t up to the “Loyola standard”. The Cubs have a decorated sports program and new coach Drew Casani desperately wants to get them back on track.

Casani, a Loyola alum who has been an assistant coach at the school for a few years, wasn’t afraid to say that the culture needed a tune-up. Coach Casani believes that part of the teams struggles are that they just aren’t going out and enjoying playing football the way he’s accustomed to, and he’s on a mission (no pun intended) to change that.

The players seem to be quite receptive, voicing their appreciation for Casani’s understanding of “Loyola’s standards and traditions.” Star ILB Steven Arrenado says that since Casani came in, “everyone is competing every day … it’s a new passion.”

Senior Thomas Hatton and junior transfer Brayden Zermeno are battling for the starting quarterback spot. The running back position will be structured by committee, with as many as four players in the rotation.

Loyola doesn’t plan on succumbing to a lack of continuity though. Seniors Carter Link and Sam Dominguez told Scorebook Live that the best way to bring back some of the senior leadership that has been lacking is to go as hard as possible, and show the young guys how they’re going to make the most out of their senior year.

Loyola is committed to making an immediate culture shift and winning as many games as possible this year. While they are technically a Division 4 team now, they’re still going to be playing seven out of 10 games against D-1 opponents in 2019. They’ll have plenty of chances for statement victories.

In addition to elite talent, Notre Dame is at the top of the Mission League in terms of continuity. And that’s something that breeds confidence for the Knights.

Head coach Kevin Rooney is now in year 40 as head coach at Notre Dame. Defensive coordinator Joe McNab has been around for all but one of those years.

Like their coaches, the team’s core has been intact for years as well. Star seniors Sean Guyton, Quintin Lyons, and Maurice Johnson have been playing varsity together for three years. The squad is returning plenty of other top-tier starters too.

Strong safety Justin Horton says due to the bond amongst the players, “everyone pushes each other to be their best.”

The bond between players and coaches is also particularly strong at Notre Dame. Guyton described Coach Rooney as a game-changing mentor both on and off the field. Horton went as far as to thank him for simply teaching so many of them how to be better men.

Notre Dame figures to be among the heaviest favorites to win the Mission League this season. While they have plenty of talent in every part of the game, it may be their familial bond as a program that pushes them over the top.

Serra: Whatever it takes to finally put it all together

The Serra Cavaliers have had some bad luck the last few years. Per head coach Scott Altenberg, they’ve gotten derailed by significant injuries for three seasons in a row. But that still hasn’t stopped them from being competitive and finishing near the top of the league.

With most of their key cogs returning, this year shouldn’t be any different, health prevailing. The offense is guaranteed to be dynamic. Serra is returning UNLV commit Doug Brumfield at QB. He threw for over 3,000 yards last season. Also returning is Lavon “LV” Bunkley, a wide-out who tied Robert Woods’ single season receptions record last year. Leading rusher Jaylon Armstead is also still around, in addition to another excellent receiver in Ronald Gilliam.

The offensive line is much more of a question mark. But four key members of last year’s unit are ready to come back much stronger, per coach Altenberg. Last year’s o-line was young, inexperienced, lacking in depth, and often injured. Health permitting, this year should be much better.

The defense wasn’t on par with the offense last season, but luckily most key contributors are returning this year led by senior linebacker Justin Houston.

Last season Serra fell 49-0 to St. John Bosco in the first round of the Division I Southern Section playoffs. This year, per Bunkley, “the leaders, the captains, are going to be ready for anything, for anybody.” Serra is hungry, and tired of injuries and minor flaws derailing their promising seasons.

Altenberg says this group fights, and these veterans know how to respond to adversity. They look forward to the big matchups, and take pride in showing up to them. The team is willing to do whatever it takes to win.

In fact, Brumfield is even preparing to make some personal sacrifices to make this thing go. Hyper-talented sophomore quarterback Maalik Murphy is in some ways breathing down his neck. Brumfield is the starter, but Murphy has practiced so well that he’s earned varsity reps as well. That would frustrate many returning signal-callers, but Brumfield has taken Murphy under his wing, according to Altenberg.

That relationship sums up Serra well. Hungry, ready to sacrifice in any way that’s needed, and hopeful that this is the year they get a fair shot at winning the Mission League.

Alemany: Can young guns push them over the top?

Alemany is another team that is young and hungry, and a legitimate threat to win the Mission League. Last year, Casey Clausen inherited a talented but raw squad with a lack of upperclassmen leadership. They still finished 7-5 overall, 2-3 in league – a solid showing for what was arguably a “rebuilding” season.

The season started with three straight blowout victories before Oaks Christian showed them what it takes to be true contenders in Southern California. Oaks won that game 56-14 over Alemany and even led 48-0 at one point. After that, the Warriors lost some momentum, but still won some games and fought every single night.

This year, they’re ready to compete with anyone and everyone. Clausen believes that last year created new team environment. And this year, the culture shift will translate to even more improvement on the field.

Clausen believes that it was the team’s exceptional competitive spirit that made last season a success. With the core youth that is returning, they have what it takes to take things to the next level in 2019. They just have to have that competitive edge every single game.

Chaminade: Tough it out until next crop of stars present themselves

Let’s not sugarcoat it: Chaminade lost a lot seniors to graduation following the 2018 season.

Star quarterback Ryan Stevens is gone. Leading rusher Alex Okuribido is gone. Arguably their top four receivers, and seven of their top eight, are gone. The picture is no better on defense, particularly with defensive co-MVP Blake Antzoulatos moving on to Cal. Antzoulatos recorded an unfathomable 427 tackles during his last three seasons with the Eagles.

But by no means does that mean Chaminade lacks talent.

All-league lineman and team leader JP Reilly is still there, along with Blake Sullivan, a rugged RB who plays some DB as well. And there are others too, such as gritty lineman Isaac Gallegos. At the quarterback spot, Tyler Voss and Jaylen Henderson are in the midst of a back-and-forth battle for the starting job. While neither have experience running the Chaminade offense at the varsity level, the program is extremely high on the talent of both of them. Versatile senior transfer Willie Camacho has the coaching staff excited as well.

In short, the list of talented potential replacements for starters who graduated is long. Head coach Ed Croson is confident that the talent is there, it’s just that nothing is solidified yet.

The one thing he is most sure of is that his team is as tough as it gets. And that it will get them through a potential period of heavy transition.

Reilly says that a couple losses to elite teams like St. John Bosco and Bishop Amat last season brought the team closer together. After those tests, the brotherhood only strengthened and the team started working even harder.

As a result, Chaminade is a wildcard. They lack veteran experience direly, but believe in their fortitude and potential upside as much as anyone.