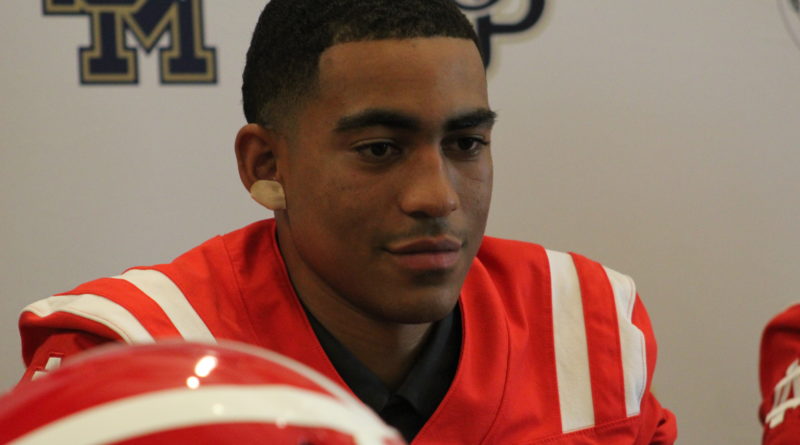 LONG BEACH – Unless you are Mater Dei or St. John Bosco, playing football in the Trinity League is a tough proposition. And even then, those two rivals have each other and plenty more Southern California powerhouses breathing down their necks.

On Friday morning, all six football programs in the Trinity League gathered in Long Beach for the league’s inaugural media day. Each head coach opened with an overview, and then answered questions alongside four players.

Mater Dei’s Bryce Young and St. John Bosco’s D.J. Uiagalelei drew the most attention. Both of their teams are in the discussion for best high school football team in the world this upcoming season. Servite and JSerra, while expected to finish behind those two teams, are still on a short list of projected best teams in the country.

Orange Lutheran and Santa Margarita aren’t expected to contend for a league title. But even if they finish near the bottom of the league, they’re still among the few hundred strongest programs in the nation.

All that said, anything can happen in the Trinity League. In arguably the toughest high school football league in the country, every team is too good to count out, and every team is filled with future NCAA Division I players.

Mater Dei: Bryce Young ‘has the keys to the race car‘

Mater Dei’s legendary head coach Bruce Rollinson made no bones about his team’s outlook this year. The goal, as always, is to destroy everyone in their way and decree themselves the best team in the country. According to Coach Rollinson, the answer is to give Bryce Young “the keys to the race car.”

Young, a senior, is the highest rated dual-threat quarterback in the country. The USC commit was recently upgraded to 5-star status by 247, and is a clear-cut preseason favorite for All-American. Young threw for 3,846 yards on only six interceptions last season en-route to a state championship.

While Rollinson’s message about Young was the highlight of the press conference, one thing is certain: the Monarchs are filled to the brim with D-1 commits and projected future NFL players. Washington commit Myles Murao, for example, may well prove to be the best offensive lineman in the country if he gets back to full health after last year’s right leg break.

Per usual, Mater Dei’s biggest challenge will be their divisional rival, another favorite for state champion, St. John Bosco.

St. John Bosco: Can this core win a title?

D.J. Uiagalelei and St. John Bosco are competing with Mater Dei for more than a Trinity League title. Whoever comes out of the league is a favorite to win state, and perhaps stature as the best team in the country.

Coach Jason Negro and his stacked squad know the pressure is on them to win a title. After all, this core, featuring Uiagalelei, superstar lineman Drake Metcalf, Kobe Pepe, and Kourt Williams haven’t tasted a Southern Section championship since becoming full-time varsity players.

Last season, St. John Bosco defeated Mater Dei handily in October, but the Monarchs edged the Braves 17-13 in the Southern Section’s championship game. According to Pepe, execution in a few key moments was the only thing that got in their way last season.

Unmistakably, the pressure is on St. John Bosco to come out of the Southern Section this season. How they handle it in crucial moments is yet to be determined.

One thing is for certain though — Metcalf wants to “take out [his] wrath on every single guy [he goes] up against.”

If somebody in the Trinity League is going to ruin the duopoly, the upset will likely come from JSerra. The Lions are rarely talked about in the same sphere as Mater Dei and St. John Bosco, but JSerra is ready to challenge that.

The Lions have an explosive offense, starting with one of the biggest and baddest offensive lines you’ll see in high school. It features 6-foot-7-inch, 265-pound Michigan commit Jeff Persi and a number of other D-1 prospects upwards of 300 pounds. Offensively, star RB Chris Street (committed to Cal) and QB General Booty headline a wealth of playmakers.

Last season, head coach Pat Harlow frequently found himself asking his team, “Do you believe?” And twice, they were within grasp of, as they describe, “knocking down the door.” They finished the season 9-3, with two of those losses suffered by blowing leads late to elite teams.

Those teams? Westlake Village powerhouse Oaks Christian, and none other than St. John Bosco.

While the Lions ultimately missed two opportunities to win extremely meaningful games, the belief is alive and well. JSerra is ready to back up their confidence with improved focus to detail that they believe cost them those games.

Both Harlow and Street echoed the belief that some mental lapses both in preparation and action were the fatal flaws. JSerra has an uplifting, unmistakable culture of having fun at every step. And they believe they’ve learned from last season’s mistakes, and don’t plan to make them again.

Make no mistake about it, every one of these teams considers themselves a family, a brotherhood. But there is something particularly striking about the way Servite garnishes those words every time someone speaks. And coach Troy Thomas’ Friars will be the first to tell you that it sets them apart from their competition.

That’s not to say that Servite lacks elite talent, because they are stacked. From DB Karrington Dennis to OL Nick Martinez to TE Jake Overman, Servite can hang with anybody. That’s nothing new. But both coach Thomas and star defensive lineman Tristen Wilson say that this team has bought into the program’s unique culture even more than they’ve seen before the start of the season.

Servite just finished their team camp. It’s an intense four-day, three-night training boot camp that includes sleeping in the gym. Their renowned summer sleepover doesn’t actually involve much sleep — more just training — but the brotherhood runs deep. The culture of Servite is to embrace vulnerability instead of running from it, which leads to a particularly deep bond.

As Wilson explained to Scorebook Live, the camp involves “blood, sweat, and tears shed, which makes [them] closer to [their] brothers, including the ones [they] don’t know as well going into it.”

In the Servite family everyone is “willing to be vulnerable — open about their faith and their love for their brothers.” And that’s exactly what brings out the “dog” in all of them.

Orange Lutheran: Grit and trust will make up for QB inexperience

Replacing superstar quarterback and incoming South Carolina freshman Ryan Hilinski will be no easy task. And the quarterback battle is going to come down to sophomore Logan Gonzalez and freshman Carson Conklin. Neither one of them have experience running the offense at the varsity level.

That’s not to say they aren’t talented. In fact, Conklin is ranked as one of the top dual-threat quarterbacks in the class of 2023. But inexperience at quarterback is hard to nullify with sheer talent.

While the Lancers lost a ton of top starters, head coach JP Presley is confident that his team is extremely hungry and gritty. And defensively, they’re returning seven starters, including star defensive back RJ Regan Jr.

All-league LB Jonah Laban told Scorebook Live that the entire team plays extremely hard for each other. They have plenty of upperclassmen ready to demonstrate that grit by example. And he went out of his way to point out that despite the lack of experience, the program has tremendous confidence in their young QBs.

The grit and trust may or may not be enough to win games in the Trinity League. But either way, Orange Lutheran is a team that nobody can afford to sleep on.

Santa Margarita: Rebuilding yes, but rolling over no

Santa Margarita struggled in 2018 against league foes. The Eagles went 0-5 last season despite going 3-2 against excellent non-league competition. Now they have a new coach, in addition to a host of young starters.

Brent Vieselmeyer, formerly a coach with the Oakland Raiders, knows his team might need an adjustment period. Mostly just because it’s, well, the Trinity League. But while he’s new to the Eagles, he’s already accustomed to the program’s tradition of playing physical.

He also pointed out that part of the tradition is excellence in the academic domain. That’s nothing new to anybody in the Trinity League, but he was quick to acknowledge the elite academic prowess of some of their best players, including Derek Wilkins and Keanu Kama.

Vieselmeyer’s approach to this season makes perfect sense. Start by playing physical and with pride, and adjusting quickly. Then, who knows what will happen a couple months from now if his team gets hot at the right time.