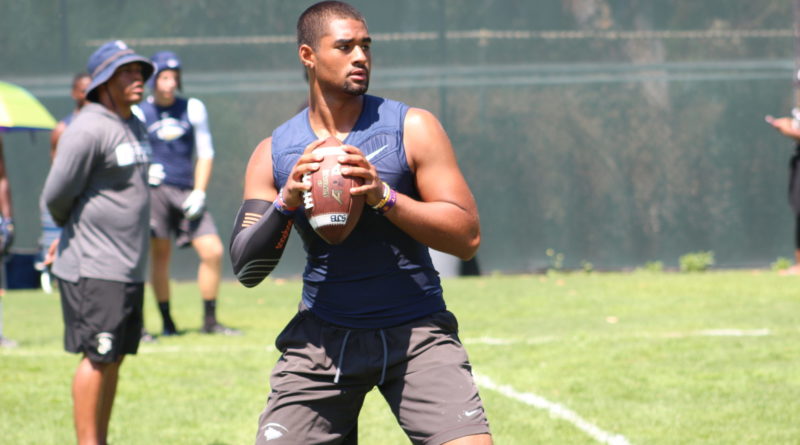 Are you ready for some high school football?

With the 2019 season just around the corner we put together a primer for Southern California high school football fans, ranking the top 100 players. The rankings encompass the Southern Section, L.A. City Section and San Diego Section.

Below are the top 25 players on our list, headlined by St. John Bosco quarterback DJ Uiagalelei, who is considered the top pro-style QB in the country.

Greenfield was instrumental in Crenshaw’s state championship run in 2017. He played at Bingham High in Utah as a junior. The Oregon commit is now at Narbonne and is a part of one of the top secondaries in the region.

Johnson caught 72 passes for 1,007 yards as a junior at Venice High. The Arizona State commit has transferred to Cathedral for his senior year.

Persi is committed to Michigan. The rising senior will anchor a JSerra offensive line that will create openings for running back Chris Street and protect quarterback General Booty. 2019 will only be Persi’s second year as an offensive lineman. He moved over from tight end following his sophomore season.

As a sophomore at Diamond Ranch, Dixon caught 43 passes for 862 yards and 11 touchdowns. He burst onto the stage as a national recruit following his strong season and has since transferred to Mater Dei. He’ll have the chance to be the Monarchs’ top pass-catcher in 2019. Dixon joins a receiving corps that also features Kody Epps, CJ Williams and Kyron Ware-Hudson.

Collins didn’t put up huge numbers in 2018, but he will be one of St. John Bosco quarterback DJ Uiagalelei’s main targets this season. The two have developed a great connection in the offseason and have been showing off at recent passing tournaments. Collins has received scholarship offers from the likes of Alabama, Clemson and Ohio State.

In ten games a year ago Houston made 105 tackles. He also had a pick-six. Houston’s brother John is a senior linebacker at USC.

The Oklahoma State commit threw for 2,739 yards and 29 touchdowns as a junior. The 6-foot-6 235 pound gunslinger will enter his second season as a captain for Norco in 2019.

The Washington commit threw for a whopping 4,135 yards and 55 touchdowns in 2018. Garbers should put up video game-like numbers again this season. His three favorite targets, Bradley Schlom, John Humphreys and Mark Redman, all return for their senior years at Corona Del Mar.

Bunkley-Shelton caught 81 passes for 1,012 yards and three touchdowns in 2018. He also made 35 tackles as a defensive back. The receiver has received scholarship offers from Ohio State, USC and a handful of other high profile schools.

In his sophomore season playing for one of the top teams in the nation, Davies made 20.5 tackles for loss and had 7.5 sacks. He also grabbed an interception and caused four fumbles. 247Sports.com ranks Davies as the number one outside linebacker in the nation in the 2021 class.

As a junior at Orange Lutheran, Loya caught 73 passes for 1,057 yards and 11 touchdowns. He has transferred to St. John Bosco for his senior year where he joins a receiving corps that includes Beaux Collins, Kris Hutson and Jode McDuffie.

Green-Warren was one-half of the best cornerback duo in the state in 2019. Alongside Elias Ricks, Green-Warren led a Mater Dei defense that won Southern Section and State open division titles. The cornerback finished the year with three interceptions and only 21 solo tackles. Quarterbacks didn’t throw his way too much. For the 2019 season, Green-Warren has enrolled at Narbonne.

Banks had 20 tackles for loss and 13 sacks for Narbonne in 2018. In the City Section championship game against Garfield, Banks blocked a punt and returned it for a touchdown. The linebacker’s top four college choices are Alabama, Ohio State, Oklahoma and Washington.

Bryant hauled in 40 receptions for 905 yards and 11 touchdowns in 2018. He also had a rushing score. Defensively, Bryant snagged two interceptions and returned a punt for a touchdown on special teams. The receiver is a consensus top 300 recruit in the nation and has scholarship offers from over 20 schools.

Burton caught 40 passes for 863 yards and 14 touchdowns a season ago for the Coyotes. The LSU commit competed in the Opening Finals in Frisco, Texas earlier this month.

Williams averaged 5.3 tackles per game last year for St. John Bosco. The senior-to-be will lead a Braves team that hopes to return to the top of Division I in the Southern Section following two years of Mater Dei dominance. Williams plans to announce his college commitment July 29th. Ohio State, Oklahoma, Penn State, Tennessee and Texas A&M are all in the mix for the linebacker.

Humphreys’ junior stat line is incredible: 103 receptions, 1,783 receiving yards and 28 touchdowns. The wide-out is a top 250 national recruit on all of the major sites and still might be underrated. He is committed to Stanford.

After sitting out Narbonne’s first four games in 2018 due to CIF transfer rules, Garcia started under center the rest of the season for the Gauchos and led Narbonne to a City Section open division championship. The quarterback completed 75% of his passes and threw for 1,783 yards and 15 touchdowns in limited game time.

The Washington commit started as a sophomore on Mater Dei’s 2017 state championship team, one of the top California high school football teams in the state’s history. Last season, Murao broke his leg playing for the Monarchs. He’s still not 100% and is hoping to work back to full strength by the start of his senior year.

In a year he battled injuries, Wilson still caught 40 passes for 672 yards and ten touchdowns as a junior. The receiver has been a consistent varsity playmaker since his freshman season at Calabasas. He’s regarded as one of the nation’s top prospects regardless of position.

Phillips is a coach’s dream. He caught 54 passes for 1,210 yards and 19 touchdowns in 2018 and the rising senior isn’t even a receiver by trade. Phillips has committed to Ohio State to play cornerback. He picked off two passes and made 18 tackles as a junior. Opposing quarterbacks were afraid to look his way.

After contributing to a Corona Centennial team that advanced to the Division I semifinals of the Southern Section playoffs in 2018, Foreman has had an offseason to remember this spring/summer. Even though he’ll only be a junior, he won the defensive MVP at the Opening Finals in Frisco, Texas earlier this month. His recruitment has exploded as well. The defensive end will be a huge piece for the Huskies in 2019.

Young led Mater Dei to Southern Section and State open division titles in 2019. The USC commit threw for 3,846 yards and 39 touchdowns. He returns to a Mater Dei team that’s looking to win a state championship for the third straight season.

Ouch! Flowe is the region’s scariest linebacker. He made 145 tackles including 17 for loss in 2018. He will visit Alabama on September 20th.

Uiagalelei passed for 3,366 yards and 48 touchdowns in 2018. The Clemson commit is the top pro-style quarterback in the nation, per 247Sports, ESPN and Rivals. Uiagalelei has won a Trinity League title and multiple playoff games. As a senior, all he’s focused on is bringing home Southern Section and State open division titles.