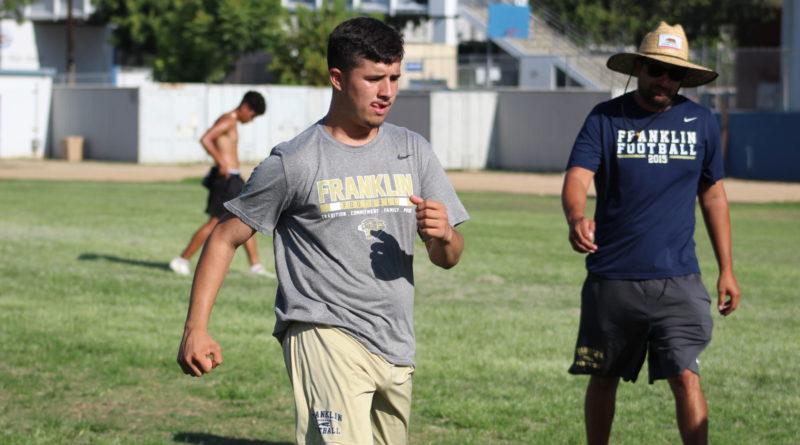 The 2018 L.A. City Section leader in completions, passing yards and touchdown passes might not pursue a college football career.

“You’re not going to be able to play your whole life,” Franklin quarterback Alfred Bobadilla said after practice Tuesday. “I’m trying to look past football.”

Bobadilla led Franklin to an 11-2 record in 2018. He finished the year with 3,267 passing yards, 36 passing touchdowns and 10 rushing touchdowns. The Panthers won two playoff games before falling to Locke in the Division II semifinals, the team that went on to win the City Championship.

Bobadilla desperately wants to cap off his high school career with a City title, but he also hopes to figure out his post-football plans during his senior year.

“I want to continue to go to school,” Bobadilla said. “I’m not sure where, probably at a Cal State so I don’t know if I’ll continue football. I want to be a firefighter if that doesn’t work out.”

Most high school seniors are in Bobadilla’s position. What separates the quarterback is that he has the skillset to play college football, according to his coach Narciso Diaz.

“I always tell him, hey look, these schools are looking for you to go play,” Diaz said. “For me it’s a little shocking.”

Azusa Pacific and La Verne have both inquired about Bobadilla. His numbers speak for themselves, but his actions off the field have also contributed to the collegiate interest.

“We have the JV team and the varsity team in the same locker room and [Alfred’s] talking to the JV quarterback, the JV receivers teaching them how to run the routes,” Diaz said. “He’s not all about himself.”

For the most part, Franklin rolled through the regular season last year. In their victories, the Panthers beat opponents by an average of 26 points. The one exception came against Eagle Rock, one of the top teams in the City Section. The Panthers lost that game 56-6.

“The Eagle Rock game was frustrating,” Bobadilla said. “It sucked. We expected it to be a good game. Everyone just went into shock.”

To try to avoid another heavy Eagle Rock defeat and to better prepare his team for a deep playoff run, Diaz has added San Fernando and Fairfax, two Division I programs, to Franklin’s 2019 schedule.

Not only will those games toughen up Franklin, they also could help Bobadilla’s recruitment. The senior quarterback is guaranteed to start three games against high-level defenses in 2019. He might still opt to skip out on college football, but these games could lead to more opportunities.

“Winning one of those games would be great for Alfred,” Diaz said.