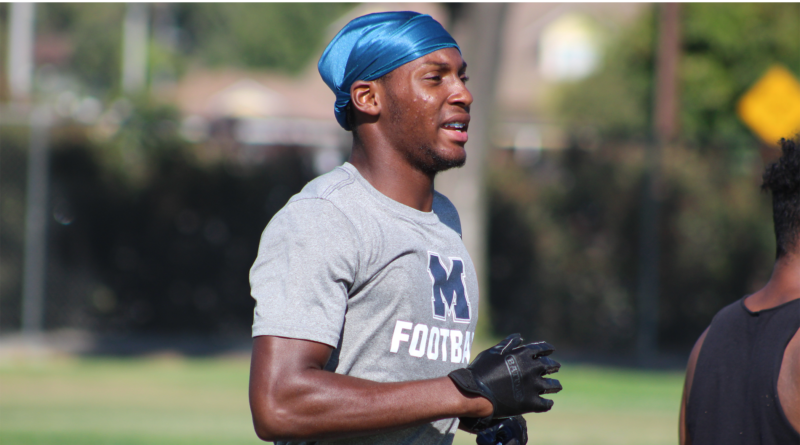 Semaj Verner loves the game of football, which is why last year was so hard.

The 2020 cornerback and wide receiver transferred from Lakewood to Mayfair for his junior year but had to miss the 2018 season due to CIF transfer rules.

Lakewood thought Mayfair recruited Verner, which the school denies. Verner was not allowed to compete in athletic contests until the CIF ruled him eligible for track and field after football season had already ended.

“It was a really tough experience,” Verner said. “It was really hard for me because I love football. I didn’t know what I did.”

When Verner first got the news he’d miss the year, he immediately thought of his mother. How could he earn a football scholarship and get her off the hook for college payments if he couldn’t play?

“I was really down about that,” Verner said.

But as time went on he accepted his situation. “I couldn’t just sit there and be in a bad mood,” Verner said.

In 2018 Verner did not miss a football practice. Knowing he wouldn’t be able to play on Fridays, he still showed up every day to work with his Mayfair teammates.

“People would ask me, dang! Why are you at practice?,” Verner said. “Just for me, I love playing football. Even at practice, catching the football, guarding someone, it just feels amazing.”

“The players on our team saw his dedication to the program,” Bedell said. “If this guy’s not even going to play and he’s busting his ass, I better bust my hump too, otherwise we’re going to have a problem.”

Verner played a very important role a year ago that was beneficial to both the team and himself. Every week he helped prepare Mayfair safety and receiver Chris Adimora for the Monsoons’ next opponent. Adimora was one of the top senior football players in Southern California and is now a freshman safety at Texas.

Day in and day out Bedell would witness Verner and Adimora battle.

“Semaj made Chris Adimora better and in turn it’s changed the way he approaches the game this year,” Bedell said.

Those practices got Verner ready or spring football, which is where everything has come together. The cornerback has had such a strong last few months that he’s been offered 19 scholarships.

When asked why he’s been so heavily recruited despite his lack of game time, Verner’s answer is short and to the point.