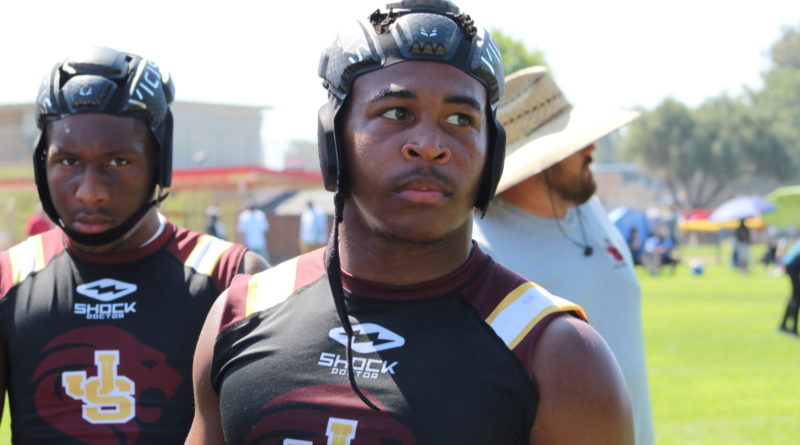 We began by looking at numbers 100 through 76 last week. Today we continue our countdown with numbers 75 through 51.

Fuamatu will anchor the Monarchs’ defense in 2019. After transferring from La Habra in the 2018 offseason, the linebacker turned heads in Mater Dei’s 28-24 win against IMG Academy a year ago. Fuamatu has nine scholarship offers.

Ambagtsheer helped lead St. Augustine to the Division I San Diego Section championship a year ago. The tight end prospect also plays defensive end and recorded eleven tackles in the Saints’ 21-20 title game win against Helix. Ambagtsheer has five scholarship offers, including one from Utah.

Partner Ambagtsheer with Byron Cardwell and it’s easy to see why St. Augustine will be Open Division contenders in San Diego. Cardwell ran for 1,096 yards and 13 touchdowns a season ago. He also caught 19 passes for 405 yards and two more scores.

Following a transfer from Lakewood, Verner was ruled ineligible to play for Mayfair as a junior. The school fought the decision, but a ruling on Verner’s eligibility did not come until Mayfair’s season ended. Despite not playing in any games, the safety did not miss a Mayfair practice a year ago. He will be full-go as a senior. Even with his lack of game film, Verner has seen his recruitment take off in the last few months. He holds offers from UCLA, USC and a few other Pac-12 schools.

Wright is an incredible athlete. In addition to his offensive and defensive duties for the Cubs, the junior-to-be will also returns kicks and punts in 2019. He’s excelled as a sprinter on the Loyola track team as well competing in the 100-meter, 200-meter and 4X400-meter relay.

Nicholas won the Avocado League Defensive Player of the Year a season ago. He has scholarship offers from Arizona, Cal and Oregon State.

Buchanan rushed for 2,137 yards and 18 touchdowns as a junior. He averaged nearly twelve yards per carry. The running back has received scholarship offers from Arizona and Washington State.

Murphy hasn’t started a game at Gardena Serra and there is no guarantee he will as a sophomore. He’s competing with returning starter and UNLV commit Doug Brumfield. The fact that Murphy is even in contention for the starting job shows just how blown away the Serra coaching staff has been with his talent. Murphy is 6-foot-4 and weighs 205 pounds. When the recruiting services come out with the 2022 class rankings, he’ll be one of the top quarterbacks, if not number one.

Johnson transferred to Muir from Northview this offseason. A year ago as a sophomore, he caught 35 passes for 539 yards and nine touchdowns. Defensively he made 36 tackles and had an interception. Oregon, Florida, USC and a handful of other schools have offered Johnson a scholarship.

Anderson had a very productive end to 2018. He caught a touchdown in the Diablos’ playoff defeat to Mater Dei and hauled in another in Trinity League play against Orange Lutheran. Look for new Mission Viejo quarterback Peter Costelli to develop a solid partnership with Anderson in 2019.

Jones tore his ACL and MCL in a preseason game last year for St. John Bosco. Similar to Bishop Amat’s Damien Moore, the senior-to-be has rehabbed and committed to a school since his injury. Jones pledged to UCLA in late June.

Epps has a chance to be the Monarchs’ top receiver in 2019 with the departures of Bru McCoy and Michael Martinez to graduation. The rising senior has played well in seven-on-seven this offseason. He was Mater Dei quarterback Bryce Young’s favorite target at Mission Viejo’s passing tournament July 13th. Epps caught four touchdowns in a pool play game against Orange Lutheran. He has five scholarship offers.

The Cal commit rushed for 1,342 yards and 17 touchdowns as a junior. Street has been very involved in the JSerra passing game during offseason seven-on-seven tournaments. Look for him to be more active as a pass-catcher out of the backfield for the Lions in 2019.

Monheim is a monster. He stands at 6-foot-5 and weighs 280 pounds. He’ll be in charge of protecting Moorpark quarterback Blake Sturgill from the left tackle spot in 2019. Monheim holds scholarship offers from Alabama, Oklahoma and USC.

Pepe committed to USC in June. He was a stalwart for one of the best defensive lines in the country a year ago. Pepe is excellent against the run; he had five tackles for loss in 2018.

Harvey had a sophomore year for the books in 2018. He caught 43 passes for 701 yards and six touchdowns. Defensively, Harvey intercepted seven passes. He’s emerged as a national recruit and has received scholarship offers from LSU, Nebraska and Oregon.

Vaka has averaged 67 tackles per season in the last two years for Westlake. He has eight scholarship offers.

Toia played a big role in Grace Brethren’s state title run in 2018. He had five tackles including two for losses in the Lancers’ 21-14 state championship win over Del Oro. Toia is committed to USC.

Like Serra quarterback Maalik Murphy, Greene has incredible potential. The 6-foot-5, 300 pound sophomore will occupy one of the tackle spots for St. John Bosco this season. The Braves’ coaching staff believes Greene is a generational talent and will have an opportunity to play in the NFL down the road.

Buchner tore his ACL in game one of his sophomore year at Bishop’s. The injury did not keep college coaches away however as he continued to receive scholarship after scholarship despite being sidelined. Buchner committed to Notre Dame in March.

Get ready for an incredible stat line… 124 catches, 2,103 yards, 32 touchdowns, 34 total touchdowns, 87 tackles, and 8 interceptions. Those numbers are from Savage’s junior year. What will the Arizona State commit’s senior year look like?

Like Savage, McCullough produced at an incredible level in 2018 too. He finished the year with 211 tackles, averaging 16.2 per game. The linebacker has received scholarship offers from Arizona State, UCLA and USC.

A few of Diamont’s weapons have transferred out of Venice, but the Duke commit has elected to stick around. Diamont threw for 2,560 yards and 26 touchdowns as a junior. He also rushed for 729 yards and five more scores.

Yary caught 33 passes for 386 yards and six touchdowns in just eight games in 2018. Some scouts think Yary could transition into an offensive tackle at USC. His 6-foot-6, 255 pound frame make him a versatile weapon for Murrieta Valley.