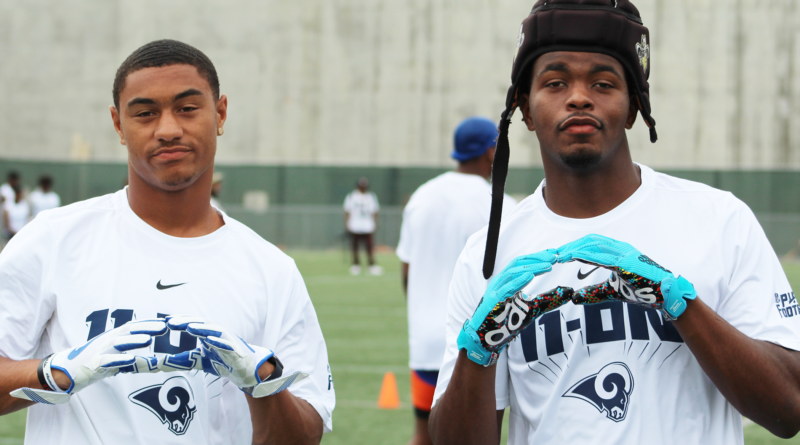 In his sophomore year, Harvey led Locke to a Division 2 Los Angeles City Section championship as a tight end and defensive lineman. This year, Harvey will play quarterback for the Saints. He holds offers from Arizona, Arizona State, Colorado, Nevada and Utah.

East led the Marine League in receptions as a junior. The wide-out has been playing with Gaucho quarterback Jake Garcia since the two were underclassmen at Long Beach Poly. They have a strong connection that should continue in 2019.

Last season Hurtado was named the Offensive MVP of the Empire League. In addition to his running back duties, Hurtado also took snaps at quarterback and linebacker in 2018. He holds five scholarship offers.

Shipley committed to Oregon last month. The 6-foot-5, 260-pound defensive end is one of the best players to come out of the Coachella Valley in the last decade. The senior-to-be recorded 73 tackles, four sacks and 65 quarterback hurries in 2018. Shipley’s father, Ron, coaches at Shadow Hills and was drafted by the Kansas City Chiefs in 1991 as an offensive lineman.

Saunders won the Southern Section’s Division 13 Defensive Player of the Year award in 2018 after leading Orange Vista to the section championship game. He holds scholarship offers from Cal, Boise St, and Oregon St.

Hobert won MVP of the Seaview League a year ago following an incredible junior season. The Washington State commit caught 46 passes for 643 yards and nine touchdowns. He also intercepted four passes as a defensive back. Hobert played special teams too. The senior-to-be punted, kicked and returned punts and kicks for the Stallions. He returned two punts for touchdowns and brought back one kick-off for a score.

San Diego’s first representative comes from Helix High. Last season, Noa was named the East County Sports Player of the Year. He rushed for 2,326 yards on 202 carries and scored 25 touchdowns.

Hernandez anchored a Trailblazers defense that won the Southern Section Division 3 championship and then a state bowl game against Division 2 champ Upland. The linebacker finished the season with 168 tackles, four sacks and an interception.

King transferred into Calabasas from Desert Pines in Nevada last summer but wasn’t eligible to play for the Coyotes until very late in the year. The Washington State commit has had strong showings on the seven-on-seven circuit and at camps this offseason. He’ll aid Calabasas’ passing attack, which is one of the best in Southern California.

A knee injury hampered Gulbranson’s junior season at Newbury Park. Despite missing over half the year, the senior-to-be still threw for over 700 yards and seven scores. Gulbranson is committed to Oregon State.

In his junior season, West caught 22 passes for 375 yards and five touchdowns. At 6-foot-4 and 240 pounds, the Washington commit also blocks very well in the run game.

Williams is the first sophomore-to-be to make the list. The receiver has wowed at passing tournaments in the offseason and already holds scholarship offers from LSU, Michigan and Oregon. Mater Dei lost receiver Bru McCoy and tight end Michael Martinez to graduation. Williams will be one of the players asked to fill the void.

Speaking to the LA Times in the spring, Servite coach Troy Thomas said of McMillan: “He literally can do anything. The dude can do it all.” Judging from Servite’s performance at Edison’s Battle of the Beach passing tournament in June, the Friars will try and get McMillan the ball as much as possible in 2019.

Lemonious-Craig hauled in 30 passes for 573 yards and eight touchdowns for the Sentinels in 2018. Defensively he intercepted two passes and made 63 tackles. He holds ten scholarship offers.

Zanelli threw for 3,180 yards and 42 TD’s in 2018, which earned him the Freeway League offensive MVP. He committed to Penn earlier this month.

Serra head coach Scott Altenberg loves to throw the football and this year will be no different. The question is who will be seeing the majority of snaps under center? Brumfield started every game a year ago and is committed to UNLV. He’s one of the top QB’s in Southern California. Sophomore-to-be Maalik Murphy has had a breakout offseason however and is pushing for the job. For Altenberg, it’s a good problem to have.

Beavers transferred to Narbonne from Serra Gardena this spring. He is committed to Oregon and joins a Narbonne secondary that is loaded with Division I talent.

Johnson committed to Cal in June after a really strong junior season at Hart. The QB led an Indians offense that averaged 32.8 points per game and won its last three contests to earn a berth in the Division 3 Southern Section playoffs.

White is strong. Last year, he was the Trinity League shot put champion. And oh yeah, he is a dominant lineman too. The junior-to-be plays on both sides of the line of scrimmage. He holds scholarship offers from Arizona State, Florida and Utah.

Last season Moore injured his knee in Amat’s first game of the year against Mater Dei and missed the rest of the season. Since then, the running back has rehabbed and committed to Cal. As a sophomore, he rushed for 703 yards and eight touchdowns.

Newman and teammate Jonathan Vaughns make up one of the best safety duos in Southern California. Newman committed to UCLA in June. He made 49 tackles, snagged two interceptions, and had one tackle for loss in 10 games played during his junior season.

Fontenette transferred from Bishop Alemany to Oaks Christian this offseason. The receiver caught 32 balls for 648 yards and four touchdowns last year for the Warriors. He is committed to Arizona State.

Williams is a jack-of-all-trades for the Lions. Last year on the defensive end, Williams played linebacker. He totaled 40 tackles, five pass deflections, four tackles for loss and two hurries. He also played running back for Oaks. The senior-to-be rushed for 250 yards on 33 carries and scored two touchdowns as a junior.

In 2018, Allen led the Dons with 75 tackles and was third on his team with six sacks. The linebacker was one of the stars on a Cathedral Catholic team that fell to Folsom in the state championship. Allen’s father Eric played cornerback for the Eagles, Saints and Raiders in the NFL.