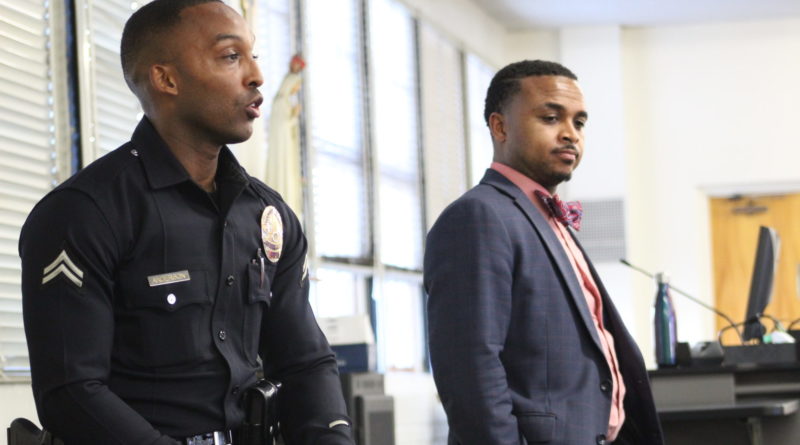 The event focused on what to do during traffic stops and the topic of sexting. The workshops take place at Gardena Serra High every Tuesday in coordination with a summer basketball league. Some teams stop by before playing and others attend afterwards.

Jeter graduated from Serra in 2002 and went on to play basketball at the University of Portland before beginning a professional career that has spanned over a decade. He puts on the workshops with Queenie Johnson, a Southern California based teacher and consultant.

“I want to do all of these workshops so that kids can get information,” Jeter said. “Growing up, we didn’t have any of this.”

Johnson added: “The goal is to equip kids with skills so that they know how life works.”

Crenshaw was the lone team to attend the first workshop. While discussing traffic stops, Person-Lynn explained that officers always want to see hands. He recommended that Crenshaw players keep their hands on the steering wheel and to talk officers through any of their movements if they are ever pulled over.

Anderson explained that it is legal to record police officers during traffic stops. He detailed how there is a right and a wrong way to go about using a recording device after being pulled over.

“When you’re a high school athlete, driving around with your teammates, there’s a good chance you could get stopped,” Anderson said. “Some people don’t know how to react, especially when they feel like they’ve done nothing wrong.”

When the presentation finished, members of the Crenshaw team stayed 30 extra minutes speaking with Person-Lynn, Anderson and Jeter.

Cougar senior Isaiah Graves walked away from the workshop with a better understanding of how to interact with law enforcement.

“It’s important we know all of this starting young because there’s a lot of violence in our neighborhood and we see stuff happen all day every day,” Graves said. “People don’t know what to do in those situations, so it’s good to have this information so if we’re ever in one of these situations, we can walk away safely.”

Person-Lynn explained the right to remain silent and the right to an attorney to the group. Anderson shared his experience getting pulled over while off-duty by some of his fellow LAPD officers.

“Two officers pulled me over and one pulled their gun on me all for a window tint stop,” Anderson said. “I was furious.”

An important goal for these workshops was to not only provide students with information, but to have people from their community provide it. Person-Lynn graduated from Westchester. Anderson went to Redondo Union. That made a big difference.

“[Jeter] brought in the police officer and the attorney and we got to see that they’re just like us,” Graves said. “That helps us better understand what is really going on and how to handle certain situations.”

Jeter and Johnson will put on weekly Tuesday afternoon workshops for the next four weeks.