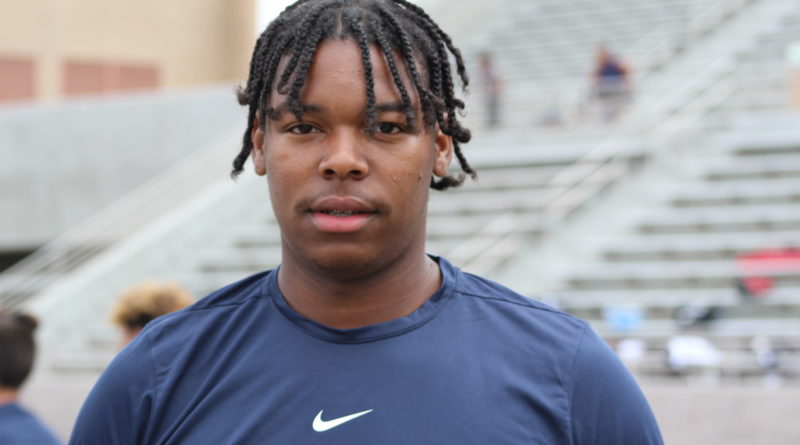 Last season Harvey played defensive end and tight end for Locke and was a catalyst for the first football title in school history. Now he’ll take on a new challenge.

“Have you seen his arm?” Locke coach Michael Klyce asked after pool play wrapped up on Saturday. “He can throw the ball. He’s an athlete who’s got a good arm on him.”

Harvey had an up-and-down day at QB in the passing tournament. In a pool game against Carson, the junior threw interceptions on back to back possessions. There were plenty of highlights though. With the clock winding down and Locke needing a touchdown to beat Carson, Harvey made one of the best throws of the day. He looped a tight-spiral 40 yards right into his receiver’s arms, but his target dropped the ball.

In 2019 Harvey will continue to play on both sides of the ball for the Saints. He’s too talented not to. The junior has already received scholarship offers from Arizona, Arizona State, Nevada and Utah for defensive end. Colorado wants him as a tight end.

Understandably, at first the 2021 recruit wasn’t sold on being under center.

“I didn’t even want to play quarterback, but I just did it for the team,” Harvey said.

Since Klyce first approached Harvey about playing quarterback during spring ball, the junior has done a one-eighty.

“Now I want to really go for it,” Harvey said. “Coach Klyce changed my mind. He told me I could do it because I’m such a great athlete and that he wanted me to do it for the team. Klyce is coaching me up really well. My accuracy is improving. I’m learning how to rotate my hips and stuff. It’s going great.”

Most athletes in Harvey’s position will play quarterback with the understanding that their true calling is somewhere else on the football field. Last year current Washington Huskies linebacker Josh Calvert played quarterback for Oaks Christian. He knew he would never play there in college, but suited up because it was what his team needed. Harvey is in the same spot, but he looks at his quarterbacking abilities differently.

“I really want to get some scholarships at the quarterback position,” Harvey said. “There could be other schools that come in and offer me for quarterback. If I go to a school that has already offered me for defensive end I could try and work my way around and get to offense. I’m an athlete. I can do it.”

Without having taken a padded snap as a quarterback, Harvey is thinking big. Klyce believes his star player can eventually get there too, but for now, he’s thinking rationally.

“He’s got to be able to put it on film first; then we can go from there,” Klyce said. “My confidence is high though. He’s going to be okay.”

No matter what happens with Harvey in the next two years, his main goals will remain the same. He wants to stay at Locke, win more championships and then play college football.

“Locke is home; I can’t leave,” Harvey said. “I want to be known for making it out from here because not too many kids make it out of Locke. Just because we’re in a bad neighborhood, doesn’t mean you can’t make it out. They say we’re just ‘hood kids playing for the fun of it, but I’m really dedicated to this.”

It’s that dedication that has endeared the Locke coaching staff as well as college coaches to Harvey. He’s primed for two huge seasons as an upperclassman and then eventually a college career, maybe even as a quarterback.