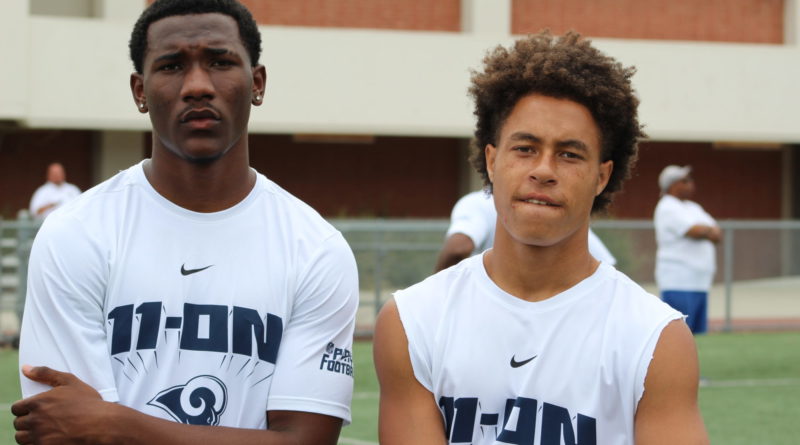 Barring a rocky semifinal game against Paraclete, Cathedral looked strong all day. 2022 quarterback Lucas Lenhoff has worked really hard to put himself in position to start under center as a sophomore for the Phantoms in 2019. The Calabasas transfer has traveled all over the country this offseason playing on the seven-on-seven circuit with Ground Zero. He’s ready to put the pads on.

2021 Narbonne quarterback Jake Garcia was the best QB in the tournament. Garcia is extremely athletic and has a cannon for an arm. There’s a reason he’s one of the most highly coveted recruits in the nation in his class. Miami and Texas are recruiting the QB the hardest. He had a great afternoon.

Narbonne has an embarrassment of riches at wide receiver. 2020 wideout Joshua Jackson is committed to USC, 2020 speedster Eren East is the best slot receiver in the City Section and 2020 receiver Elijah Queen might be the most athletic of the group; and those are just the returners. Pair them with 2020 Alabama commit Traeshon Holden who recently transferred in and you have a receiving corps that can only be rivaled by Mater Dei and St. John Bosco. All four wideouts impressed Saturday.

2021 John Muir wide receiver Calen Bullock had a great tournament as well. In the first round of knockout play against Pacifica, Bullock made the play of the day reeling in a deep ball he had no business catching. The junior came back for an under-thrown ball and out-jumped the safety to make the circus touchdown catch.

Pacifica 2020 receiver Savonne Farmer was one of the most consistent performers on Saturday. Every game Pacifica played, the senior was in the right place at the right time and made catch after catch.