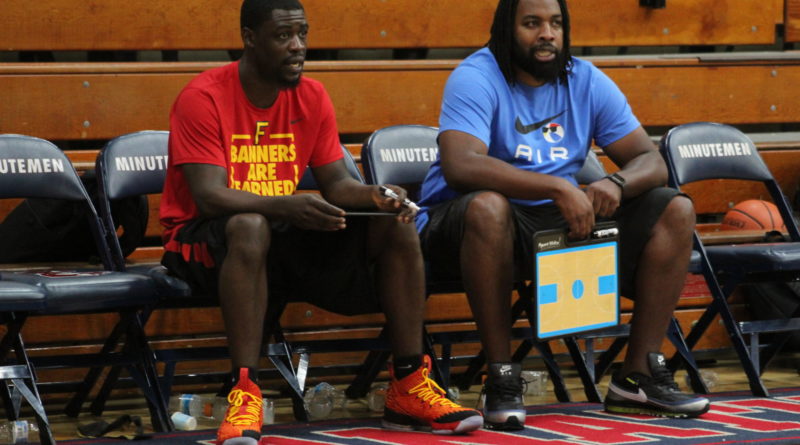 Steve Moore remembers playing in the Fairfax summer basketball tournament as a player at Dominguez High in the late 1990s. Those games gave him his first taste of the Lions’ basketball culture.

20 years later, Moore will be running the Fairfax High School summer tournament after being named head coach of the Lions on May 29.

“Being around [former Fairfax coach] Harvey Kitani and the type of players that he had in his program helped me understand what it meant to be a Fairfax Lion,” Moore said following a summer league game Wednesday at Maranatha High. “Getting this job meant everything to me. I couldn’t pass this opportunity up.”

Moore is excited to build on the legacy that was created by Kitani and continued under Fairfax’s last coach, Steve Baik, who resigned this past season after winning a City Championship.

“I’m going to bring a lot of passion, a lot of emotion,” Moore said. “I’m going to be very involved in practice. I’m really going to get into drills. If you don’t understand it, I’m going to show you.”

The hands-on approach has worked for Moore at his past assistant coaching stops at JSerra and Serra Gardena. For the last four years, Moore has been an assistant at Harvard-Westlake under head coach David Rebibo. During his stint with the Wolverines Moore mentored Kentucky signee Johnny Juzang as well as Duke signee Cassius Stanley.

“Learning under David first hand really helped me,” Moore said. “I learned how to coach high level players at Harvard-Westlake.”

At Fairfax, Moore will have a new crop of high school stars. 2020 guard Keith Dinwiddie is a national recruit who just finished up playing at the NBA Top 100 camp in Virginia. 2022 guard Dior Johnson announced he will be enrolling at Fairfax this season. He is a consensus top 25 player in his class.

Pair those two with returning point guard Justyn Hunter and the Lions will have one of the best backcourts in California. Moore’s expectations are high.

“All three can go,” Moore said. “The IQ of these players really drives me wild. They’re not ball dominant players. They’ll be getting the ball out of their hands. It’s going to be electrifying. I think I have the three best guards in the state.”

Clearly Moore is thinking big, but like most coaches he wants his team to go day by day.

“Of course it’s one day at a time, but I have high expectations and so do the boys,” Moore said. “Every single day should prepare us to put another banner up.”

Fairfax will be favorites to win the City Championship again this season along with Birmingham and Westchester, but right now, the team needs to work on coming together and adopting Moore’s system. The Lions lost 65-46 to an experienced Brentwood team in a summer league game Wednesday.

“Once the team gets used to my style of moving the ball and getting everyone involved — as well as getting used to playing together — we’ll be fine,” Moore said.