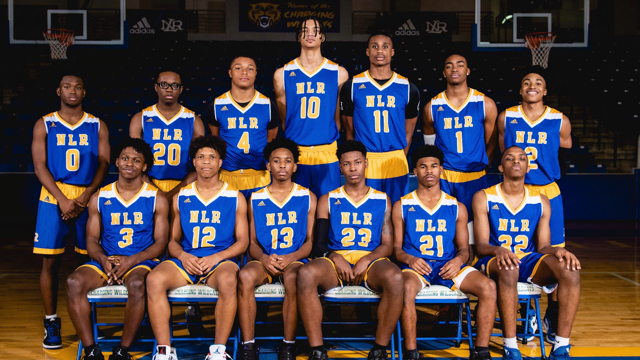 Over the next few weeks, SBLive Arkansas will break down every 6A boys and girls basketball team in the state entering the 2020-21 season. Here’s our look at the North Little Rock Charging Wildcats boys.

Smith has started off and on during his North Little Rock career and is slated to be one of the team’s top players this winter. He plays point guard and is a knockdown shooter from three-point range. “He’s got to be that coach on the floor for us and we’re also going to rely on him to score,” Rice said. “For us to be really good, he’s got to facilitate and get us organized, and he’s got to score.”

Steele is an athletic 6-foot-3 wing who can get to the rim with ease. Through North Little Rock’s first two games of 2020-21, Steele was averaging eight free throw attempts. “He also shoots the ball well,” Rice said. “But he’s at his best when he’s slashing and attacking the rim. He really finishes well in transition.”

An explosive, high-motored big man, Etim is an effortless runner and a matchup nightmare. Rice said Etim is still raw on the offensive end, but he’s a tireless worker with a desire to improve. “He’s gotten better every year,” Rice said. “That motor really changes the pace for us when he’s in there.”

At the beginning of last season, Ware was largely a non-factor for Little Rock who played spot minutes off the bench. That all changed around winter break, and the 6-foot-10 Ware suddenly became one of the state’s most dangerous players. He is rated the No. 32 player nationally for the Class of 2022 by 247Sports. “He can play inside and out, and he’s really come on,” Rice said. “The sky is the limit for him.”

Smith is light on varsity experience, but the junior guard has impressed the coaching staff with his development. “He can be that other guard that will handle it and get us organized,” Rice said. “He can also score.”

Frazier is a strong wing who had 12 points and eight rebounds in an early-season game. “He can defend multiple positions, which makes him very useful,” Rice said.

An unproven sophomore, Jackson had a double-double in North Little Rock’s season-opening win over West Memphis and came close the next game against Parkview. “He has really come on and I wouldn’t say it’s a surprise, but I didn’t know he could put those numbers up right out of the gate,” Rice said.

North Little Rock spent most of the 2019-20 season as the 6A title favorite, winning the Central by four games and earning a first-round playoff bye.

Conway stunned the Charging Wildcats in the state quarterfinals, 72-57. It was a bitter end to a stellar season for North Little Rock, which was trying to win its fifth state title since 2013 and 11th overall.

“I’m a Little Rock guy, I played here, and when I got the job, I wanted us to be relevant again when it came state tournament time, because we hadn’t been relevant in a few years,” Rice said. “So now if you don’t win it, people think we’ve had a bad year. It’s sad, but we’re blessed that we’ve built it to have those expectations.”

The Charging Wildcats lost two all-state guards in Spencer Simes (graduation) and Bryson Warren (transfer to Central), but Ware and Etim — arguably the top big man tandem in the state — give North Little Rock a distinct advantage down low.

“We’re probably not as deep at guard as we’ve been in the past, but we’ve been really, really good there,” Rice said. “It’s not that we’re bad, we’re just not as deep. But we’re as big or bigger with Ware and Ubong, and at times we try to play both of them together.”

Along with the seven players mentioned above, Rice is expecting contributions from a couple of football players in senior guard Kareame Cotton and junior guard Felix Wade. Cotton was the star quarterback of North Little Rock’s football team.

“We hope that we can play multiple ways,” Rice said. “We can play uptempo and fast but also be able to score in a half-court set, especially with having the big guys that we do.”

With a one-two punch of Central and North Little Rock, the 6A Central title race could come down to the wire. The Tigers appear to be the team to beat, but counting out the Charging Wildcats would be a giant mistake.

“Our 2018 title team really peaked at the end of the season; I’ve never had a team that peaked like that,” Rice said. “We may have peaked too early the last two years, so we’re trying to find the right buttons to push to get us to peak at the right time.”

“We hope to stay healthy and COVID free; we want to win a state title and conference championship and really peak at the right time.” — Johnny Rice