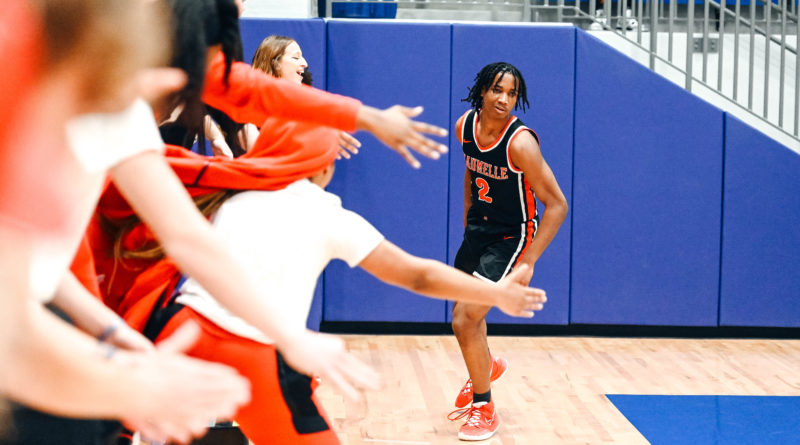 Carl Daughtery Jr, started the run by making consecutive 3-pointers around a 3-pointer by Sylvan Hills’ DaCater Coleman to make it 61-55. A three-point by by Daughtery made it 64-55.

After a jumper Sylvan Hills’ James DeLoach closed to 64-57 at the end of the third quarter, Jamaal Summons had two baskets to make it 68-57 and a drive by Daughtery made it 70-59 after two free throws by Sylvan Hill’s Shamar Womack. Two more baskets by Summons made it 74-61 after a basket by Sylvan Hills’ Trey Tippen.

“Maumelle is one of those teams that thrives on those runs,” said Sylvan Hills Assistant Coach Roy Jackson, who was filling in for Kevin Davis after he was hospitalized with COVID-19 and is currently recovering at home.

“Daugherty got hot in the third and fourth quarter and that’s when it got out of hand,” said Jackson.

Maumelle Coach Michael Shook said, “We did a better job sharing the ball. We did have a few guys who got hot in the second half. We have several quality players on this team. If we share the ball, somebody is going to get hot.”

Daughtery, who is a University of Central Arkansas signee and a McDonald’s All-American game nominee, led the Hornets with 24 points, all in the second half, while making 5-of-6 3-pointers after spending most of the first half on the bench with three fouls.

Colby Garland totaled 22 points while making 8-of-13 shots from the floor. Nico Davillier had 16 points and 6 rebounds.

“There are so many guys who are capable scorers,” Shook said.  “Carl stepped in and did that. He knocked down several key shots and got several big rebounds. Colby leads the team as our point guard and made several great decisions when they went to a zone. Nico (Davillier) did a great job so did KT (Kaleb Thurman).”

The one thing that Shook was not pleased with was the defensive effort. Sylvan Hills shot 30-of-57 from the floor, including 7-of-13 3-pointers.

“My main thing is defense,” Shook said. “Our defensive effort was not good. Our defensive execution was not good. We did not get back in transition defense. When we went to our zone. They did a good job of executing. Usually, by this point it looks better.”

“They are one of the better teams in the state, and we showed it. We gave it our all. We showed we can go to war with anybody,” said Jackson. “You don’t want to get up and down with them. They like to play a fast pace and that’s how we like to play do. It’s hard to slow down especially a good talented team.

Karsyn Morgan made consecutive 3-pointers late in the third period and early in the fourth quarter, to lift the home Lady Bears to a two-point victory over Maumelle.

With the score tied at 29-29 in the final minute of the third quarter, Morgan’s first three broke the tie and gave the lead Sylvan Hills would not relinquish. Her second one gave Sylvan Hills its biggest lead of the game.

However, the Lady Bears had to fight off a late rally by Maumelle.

With 1:55 left, Hallie Fender made a 3-pointer to close Sylvan Hills’ lead to 40-39. With 1:38 left, Maumelle’s London Robinson was fouled when Sylvan Hills’ Courtney Savell pushed off on the rebound, but Robinson missed the free throw.

Jayla Sturgis made one-of-two at the line with 29.3 seconds left to make it 42-40 for Sylvan Hills.

“This game was close the whole time,” said Sylvan Hills Coach Shelley Davis. “They have such great athletes who outweigh us by 50 pounds per body. It didn’t look pretty, but we had to do whatever it took to win.”