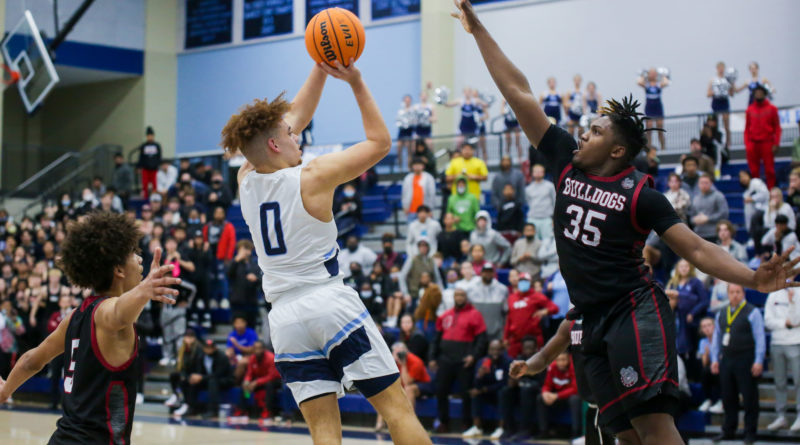 SPRINGDALE — Senior point guard Miles Rolfe has played in his share of rivalry games, but the one between his Har-Ber Wildcats and cross-town rival Springdale Tuesday night will likely be his most memorable.

Rolfe came off a screen, with a defender in his face, to drop in a 10-foot jumper at the buzzer inside the Har-Ber gymnasium, to lead the Wildcats to a thrilling 43-41 victory over the Bulldogs in a 6A-West battle.

“Time was running out and we just had to improvise, and I was able to get a shot off,” said Rolfe, who finished with six points. “I knew they were going to force me left, so luckily, I got a good screen, came off it, and took the shot. That was it. This being a rivalry game, and we had been struggling offensive all night, so to be able to finish it the way we did feels good.”

The two teams stayed neck and neck the entire game, with no lead getting above seven points. There were three different tie scores in the final two minutes, and Har-Ber ended up with the last possession.

“Both teams got some big stops there at the end, both teams traded some baskets late,” said Springdale coach Jeremy Price. “It was definitely fun for the fans. Har-Ber had it last, and (Rolfe) rose up and hit a tough shot. Our big man contested it very good, but it was just a better shot. I went over and told him after the game that he made a really tough shot.”

“We didn’t expect anything but a dog fight,” Har-Ber coach Tommy Deffebaugh said. “We knew it, and we knew we would have to play really, really well in order to win the basketball game. We didn’t shoot the ball the way we are capable of shooting it, and sometimes you have those night’s where the ball just won’t go in. But the environment was awesome, so the energy our crowd gave us was big. And sometimes you need to win ugly, by just scrapping and playing good hard-nosed defense.”

The Wildcats grabbed their first lead on a jumper by Nate Kingsbury and proceeded to hold a 19-17 advantage at the intermission.

“The trademark of our team is that anybody on any given night can step up and make a play for us,” said Deffebaugh, who had seven different players score at least four points in the game.

Har-Ber opened the second half on a 6-1 run with a pair of buckets by Jake Fotenopulous and a layup by Kingsbury to grad it’s largest lead of the game, 25-18.

But Springdale sophomore Anthony Thomas responded with a personal 6-point run, including a floater in the lane to cut the lead to 25-24 with 3:15 left in the third period.

A baseline 3-pointer from Sawyer Jeffus at the beginning of the fourth quarter put the Wildcats back up 34-28, but a 9-3 Springdale run over the next four minutes tied it 37-37 with 2:12 remaining.

After Kase Chambless put Har-Ber back up by a bucket, Springdale’s Courtland Muldrew tied things again at 39-39 with 1:16 to play.

Jeffus, who scored all 8 of his points in the fourth quarter, put Har-Ber up by two, once again, with a minute on the clock, only to see Bulldog Anderson Isaacks grab a rebound and put it back in with 43 second left to make it 41-41.

That set the stage for Rolfe close it for the Wildcats.

“It was his time,” a smiling Deffebaugh added. “Bless his heart, he’s been due. And the thing about Miles, he’s a tough-minded and wants to be successful, so this was just his moment.

“For us, it’s just one game at a time. Our guys know that we were fortunate enough to win this game, but tomorrow we will have to come back in and go to work in the gym to get ready for the next one.”

Price said his Bulldogs will also have to put this game behind then and focus on the remaining schedule, which does include a rematch with Har-Ber on February 7 at Springdale High.

“I’m proud of both teams, and it’s always fun when it can come down to the end like this,” Price said. “We didn’t execute like we should have tonight, and that’s part of the reason we were on the losing end of it. I think a lot of it was just the environment and being a rivalry game, and for us, we have a lot of kids that this is there first time playing in it. We just didn’t get to our spots very well.

“We always say, ‘Win or lose, we’ve got to come back the next day and have our best practice, ‘so we’ve just got to bounce back and get ready for Friday. But these guys are resilient and have a lot of confidence, so we just have to prepare for our next game.”

Senior Caylen Koons poured in a game-high 27 points, including four 3-pointers Tuesday night, to lead the soaring Har-Ber Lady Wildcats to a 70-44 win over Springdale in a 6A-West clash.

Lady Bulldog sophomore Aubri Wilson scored 6 of her team-high 14 points to keep the Wildcats within reach in the first quarter, Har-Ber began to take more control of the pace in the second stanza.

“We just tried to stay aggressive and work on our denials defensively, getting in the passing lanes and trying to contain the ball a little bit better.”

“Our pace is really just our pace, and it was going a little slower in the beginning, but in the second half we got it going,” said Koons. “I just go out each game and do what I’m capable of doing and not let other people affect that. I love Coach Jenkins, so I just do what she tells me to do, because I trust her.

“We’ve been waiting a long time, so we are really excited about this season. We are just staying positive and hope to keep it moving forward.”

Koons hit a pair of threes late in the third quarter to make it 55-29, then added another early in the fourth.

“We had some kids crashing the boards really hard, which gave us some extra opportunities on the offensive end, so I was pleased with that,” Jenkins said. “We just have to clean up how we start games.”

Mary Blake Martfeld had 11 points for the Lady Wildcats, while Delaney Roller chipped in 10. Carolinda Hudson added 9 for the Lady Bulldogs.

Jenkins said her biggest concern now is the health of her players.

“With all the COVID stuff resurfacing and kids being in and out, we are just trying to stay as healthy as we can, and just take each moment as it comes,” she said. “Right now, we are just thankful that we still get to play. We can only control what we can control.”