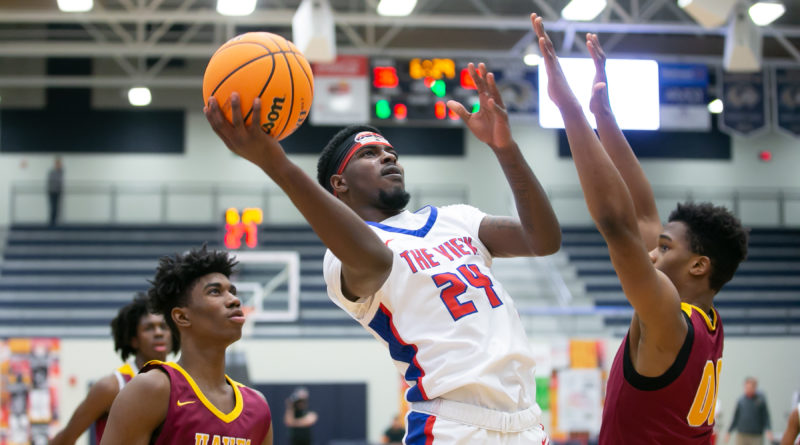 CENTERTON — Scotty Thurman‘s message to his Little Rock Parkview basketball team after Friday night’s 78-55 loss to a stout (Brooklyn, NY) Cardinal Hayes team was all about humility and embracing the challenge to work harder and get better.

It was the Patriots’ (7-3) worst loss of the season, which Thurman hopes is a turning point for his team as the 5A-Central Conference slate approaches.

“I think it definitely humbled us,” said the former Arkansas Razorback star and third-year Parkview coach. “I’m hoping this benefits our guys the right way. When you get your butts kicked, you’ve got to go back and look in the mirror, and understand that we’ve got to get better. Sometimes you may realize ‘I’m not as good as my press clippings say’.”

As part of the HoopHall South event at Bentonville West High School, the Patriots took their only lead of the game, a 2-0 advantage, on Nate Coley’s layup eight seconds into the game. After staying close early in the game, the Cardinals (9-0) began to stretch their lead late in the first quarter.

A jumper by Ian Jackson extended the Hayes lead to 19-9 with 2:01 left in the opening frame. Jackson led all scorers with 20 points in the game, after going 0-6 from beyond the arc, but hitting 8 of 9 shots inside the line.

“Offensive rebounding was the biggest difference tonight,” Thurman said after the Patriots were outrebounded 49-33. “And even when they got the defensive rebound, they ran out on us, and we didn’t get our guys back to defend.”

Senior Tobe Awaka dominated the inside for the Cardinals, yanking down 7 of his game-high 13 rebounds in the first half, to go along with his 19 points. The 6-foot-8, 240-pound power forward has already garnered a list of Division I offers.

Parkview big man Cameron Wallace had his hands full all night, but the senior managed to lead the Patriots with 15 points and 7 rebounds.

“Playing against guys at this level just helps me adjust my game, and shows me what I can do and the things I need to work on to get better,” Wallace said. “We’ve just got to learn from our mistakes in this game and correct those things before we get into conference.”

A triple from sophomore Dallas Thomas cut the lead to 24-18 early in the second quarter. But the Cardinals went on a 6-0 run, pushing the lead 12 on a layup by Jackson midway through the quarter. Another Jackson layup gave Hayes its largest advantage of the first half, 34-20, before taking a 36-23 lead into the intermission.

Parkview shot just 33 percent from the floor, and hit just 2 of 12 attempts in the second quarter.

“We didn’t shoot it well, and we didn’t perform at the level we are capable of,” Thurman said. “Hopefully, this can be a lesson we can learn from. We’ve got to change our focus and get mentally tougher, and not be individualistic. We have to be more team-oriented.”

Senior guard JK Sanders scored 7 of his 9 points in the second half, as the Patriots continued to play hard on both ends of the court.

Wallace began the third quarter with an emphatic dunk, cutting the margin to 11, but that was a close as Parkview would get it.

After another Wallace dunk with 2:47 to play in the third cut the lead back to 13, the Cardinals finished the quarter with nine unanswered point to make it 56-34.

“We’re not going to see anyone else with that type of size, and I don’t think we are going to see anybody that has that many guys that play at that high of a level,” Thurman said. “We have still got to play some really good teams, but I don’t think we will see that kind of physicality. I think it helped prepare us for the physicality of our conference, as well as the mental toughness it’s going to take to have a successful season.”

Junior guard Carson Backus hit back-to-back threes midway through the fourth, giving the Patriots a late spark. After being down by as many as 29, Parkview did finish the game on a 9-3 run.

“I think that is where we are right now,” Thurman said. “We had come off of a couple big wins, and guys can get overconfident. I think they thought coming into this game it was going to be a little bit easier than what it was. Then that leads us to not performing at the level we need to be performing. We have to be humble enough to be ready to get back in the gym, get back to work, and get prepared.”

The coach acknowledged that this is likely the deepest opponents his team will face this season, which is why he doesn’t shy away from scheduling stiffer competition in the non-conference slate.

“I’m really big on competition, so I’m not only concerned about the wins and losses,” Thurman said. “Of course, I want to win every game, but if you just play mediocre competition, you don’t get prepared when you face those tough teams like Jonesboro, or whoever you face. We are trying to get prepared for the stretch run, and sometimes you have to take your lumps along the way.

“I told our guys after the game that they really have to embrace the grind, and understand that practices prepare you for games. You can’t practice soft if you want to play hard. You have to practice hard and play hard, and that’s something our team needs to figure out quickly.”