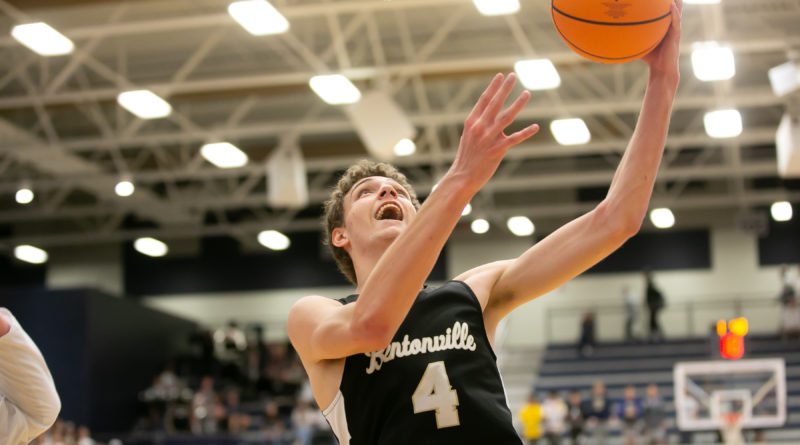 CENTERTON — Every time Bentonville and Bentonville West take the court together, a dog fight until the end is the expectation.

So, it was no surprise that Friday night’s 6A-West Conference clash literally went down to the final buzzer to decide the outcome, in the HoopHall South showcase held at the West gymnasium.

Down by a single point with 3.7 seconds remaining in the game, West got the ball to senior playmaker Riley Buccino. But his running jumper rimmed out as time expired, thus allowing the visiting Tigers to walk away with a nail-biting 39-38 victory.

“I thought we got the shot we wanted at the end, with the guy we wanted to take it, but it just didn’t go in,” Wolverine coach Greg White said. “But what a great high school game, and what a great environment. I’m proud of my kids and happy for my school district. Obviously, we wanted to win, but we are going to come back from this one.”

The lead was never more than six points either way, as defense and inside presence seemed to be the theme of the night.

It was Bentonville’s 6-foot-8 sophomore Caden Miller that controlled the boards and the scoring load throughout the game for the Tigers (10-4, 1-1), racking up game highs of 19 points and 17 rebounds, as well as 4 blocked shots.

“We were just able to get the ball inside, and Caden really had a break-out game for him, and we have been waiting for that,” Bentonville coach Dick Rippee said. “So, we felt like we had an advantage in there and we went at it. And a couple of their bigs got into some foul trouble early.

“(West) has a lot of fight in them, and we’ve got a lot of fight, so I just thought it was a great high school basketball game, for sure.”

Miller opened the scoring with a dunk, less than a minute into the game. After a Buccino jumper tied the score, Miller’s layup put the Tigers back ahead. As Bentonville tried to extend the lead throughout the first quarter, the Wolverines seemed to respond each time.

After West took its first lead at 13-12 on a 3-pointer by Buccino with 6:26 left in the second quarter, Bentonville responded with a 7-0 run to take its largest lead of the game, 19-13, on a layup by Hayden Shanks.

“It’s always going to be a battle between these two teams, because they know each other so well, they play hard and they’re well-coached,” White said.

The Tigers took a 23-18 lead into the intermission, before the back and forth continued in the third quarter. Tucker Bowman scored on consecutive layups to give West its only lead of the second half, 30-29, late in the third.

Fellow Wolverine Tucker Anderson hit a jumper to tie the score at 35-35 with 5:38 left in the game, but it was Miller’s layup and subsequent tip-in that quickly put the Tigers back in front by four with 3:15 to play.

After another Anderson layup cut the lead back to 39-37, both teams went scoreless for nearly the final three minutes. Buccino hit a free throw with 14 seconds left to trim the lead to one.

Miller then blocked a West shot in the lane with 4.9 seconds on the clock. But on the following in-bounds play, he was called for a charge while trying to run down court, giving the Wolverines their one final shot.

Abel Hutchinson added 7 points and 8 rebounds for the Tigers.

“It’s always a battle, every time we play each other, and it seems like it always comes down to one possession,” Rippee said. “Our guys just had a lot of resiliency and kept digging down deep to get some big stops down the stretch. Seems like we had to get stop after stop there in that last 30 seconds.”

“This year our guys have got some pressure on them. We went undefeated in the league last year, and we’ve got a lot of that team back, so that comes with a lot of expectations. And sometimes it’s hard to live up to those. All we can do is just keep battling and keep working, so I thought our guys did a good job and I’m proud of them.”

West will host Las Vegas Coronado High today at 6 p.m., while Bentonville follows at 7:30 p.m. with a matchup against Carver (La).