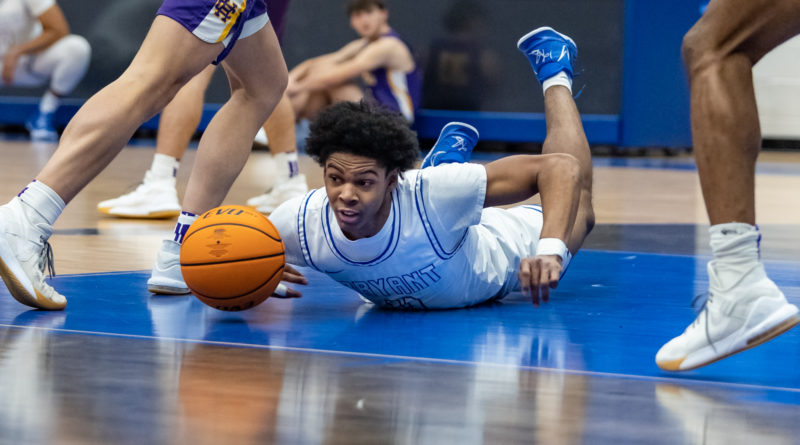 BRYANT — The Bryant Hornets (9-4, 2-0 7A-Central) stayed in control for most of the night in a 53-40 victory over the Little Rock Catholic Rockets (8-6, 1-1) at Hornet Arena on Friday. However, when the Rockets tied the score at 29-29 midway through the third quarter, the Hornets found a way to put the Rockets away.

A 3-pointer by Gabe George put the Hornets ahead for good.

“This was a really tough game and they are a tough team,” said Bryant coach Mike Abrahamson. “They tied it in the third quarter. This was not one of our best games, but our guys deserve credit for staying the course.”

After George’s triple, Abrahamson called time out and the Hornet started to grain momentum. At the 2:50 mark, Catholic’s Beau Kronenberger picked up his fourth foul and Drake Fowler made two free throws to extend the lead to 34-29.

“They did a good job of taking it to us in the second half,” said Catholic coach Tim Ezzi. “Defensively, we did not help ourselves.”

The Hornets kept the momentum in the fourth quarter when Landyn Newburn started the quarter with a jumper to make it 42-33. After two fouls on Bryant’s T.J. Lindsey, Khasen Robinson scored off a turnover to make it 44-33 and added another one in the lane to make it 46-33.

A drive by Biernat and a 3-pointer by Biernat closed it to 46-38 at the 3:08 mark before Darren Wallace scored off a feed from Robinson to make it 48-38 and Fowler added a three pointer to make it 51-38, helping secure the victory.

“When we played well defensively, we needed to score,” said Abrahamson. “We were able to get our guys some shots that they could make.”

The Hornets overcame a 4-0 deficit to lead 16-9 after the first quarter by making four 3-pointers in the opening quarter with Robinson and Fowler leading the way with 5 points.

They allowed Catholic to close to 19-17 midway through the second quarter before pulling away for a 27-23 halftime lead.

Fowler, a standout safety on the Hornets state championship football team, led the Hornets with 16 points, making 5-of-9 shots from the floor. George had 15 points and 3 rebounds while making 3-of-9 three pointers.

“Gabe hit some big baskets for us tonight, so did Drake,” said Abrahamson.

Robinson had 13 points, including eight after halftime.

As a team, Bryant shot 19-of-46 from the floor, including 7-of-23 on three-pointers. The Hornets out rebounded the Rockets 23-16 with Lindsey, who didn’t score, grabbing eight rebounds off the bench.

“T.J. gives us a good physical presence,” said Abrahamson. “We’ve had him a month since football season ended and he’s still working his way into shape. We needed that from him.

Ezzi said, “It seemed like they were getting more of the 50-50 balls and beating us to the glass. We need to do a better job on that.”

Biernat led the Rockets with 14 points and 8 rebounds while making 6-of-13 shots from the floor. Cooper had 12 points on 5-of-10 shooting.