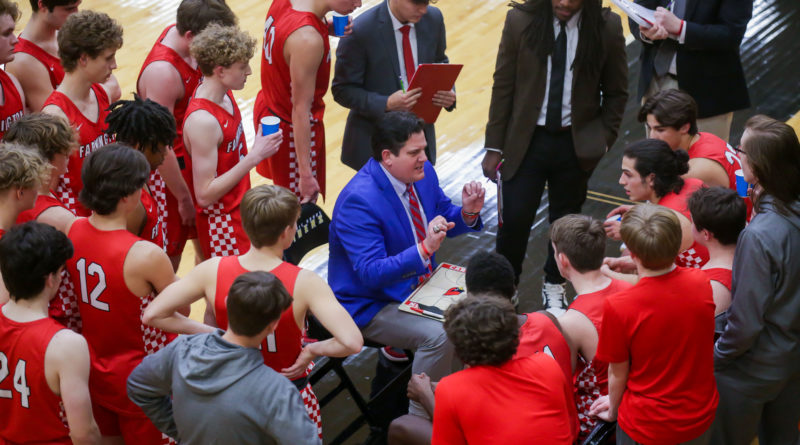 PRAIRIE GROVE — The Farmington boys continued their torrid start to the basketball season Tuesday night, making the short drive down Highway 62 to defeat arch-rival Prairie Grove 56-32 in a 1-4A conference showdown.

The Cardinals’ fast pace and rabid defense kept the Tigers at bay from the get go, holding them scoreless in the first quarter, while jumping out to a 16-0 lead.

Cardinal sophomore Layne Taylor knocked down a pair of 3-pointers in the opening stanza and senior Logan Burch hit the first of his three triples as the Cardinals (15-1, 2-0) pitched the early shutout.

“We felt like if we could get up by six we would win the game, so being up 16 was nice,” Taylor said.

A layup by junior Tate Benoit finally got the Tigers (4-9, 0-2) on the board to begin the second quarter, but a pair of layups by senior Mateo Carbonel and another Burch three quickly extended the Farmington lead to 25-4 with four minutes left in the first half.

A putback by Carbonel and a pair of free throws by senior Nathan Monroe at the end of the half gave the Cardinals a 31-11 lead at the intermission.

“This was a fun game, because we like to play at a very fast pace, and set our own tempo,” said Carbonel, who finished with 11 points. “Today, we definitely sped up the game and just attacked them. We are really disciplined on defense all the time. That’s all Coach talks about, since we are smaller than most of the teams we play. We know we have to step up and put a lot of pressure on them.”

Prairie Grove did finish the third quarter on a 7-0 run to cut the lead to 14, as junior Ryder Orr scored six of his team-high 11 points for the Tigers in the period.

A driving layup by sophomore Eric Henderson got the Tigers to within 48-32 with three minutes remaining, but Farmington finished the game with the final eight points of the game, including a conventional three-point play in the lane by junior Sam Wells with 1:44 remaining.

“We are extremely small, but we try to make up for it with really good shooting and really good ball pressure,” Taylor said. “We were able to play some guys off the bench tonight, who normally just get JV minutes, but tonight they got some varsity minutes, so we are hoping our bench and our depth gets better as conference play goes on.”

Taylor is in his second year at the helm of the Cardinals and likes the way his team is bonding.

“I’m just really proud of our guys, and they just keep getting better,” he added “And the beauty of our guys is that they are so unselfish, and they work so hard.”

Carbonel agrees that the chemistry the team has built has been key to the Cardinals’ success.

“The offensive flow mostly comes with our chemistry from playing together,” he said. “We built some great chemistry last year and now we are able to use that to our advantage this year. I think we’re going to go all the way to state.”

After a tight see-saw battle throughout the first half, Farmington (17-1, 3-0) finally shifted the momentum in its favor just before the intermission Tuesday night, then rode that momentum to a 63-49 victory in the 1-4A Conference.

Senior Trinity Dobbs scored nine of her team-high 17 points in the first quarter, as Prairie Grove (8-5, 0-3) jumped out to a 19-15 lead in the first quarter. The Tigers then stretched that lead to six in the second frame, before Farmington began to gain momentum late in the half.

Cardinal junior Jenna Lawrence poured in 16 of her game-high 25 points in thew first half, and pulled Farmington to within one, 33-32, with a floater in the lane as time expired.

“You’ve got to give a lot of credit to Prairie Grove,” Cardinal coach Brad Johnson said. “They are a much-improved ball club, and they are a serious contender in our league. In the first half it was a dog fight, but this is a rivalry game and you’re going to get that when these two teams get together.”

Farmington continued to build that momentum in the second half after switching to a zone defense to take advantage of its size.

Senior Megan Hernandez scored nine of her 14 points in the third quarter as the Cardinals took a 46-39 lead in the third.

“I thought our kids in the second half did a really good job of settling in, and switching to zone kind of changed the flow of the game,” Johnson said. “We really just tried to go inside out the entire second half and play off of that.

“I think that’s a credit to our team, because sometimes when you get punched in the mouth like that, you can panic, and I don’t think our kids did. It was just a great high school game, and just another day in the 1-4A.”

Farmington finished on a 17-10 advantage in the fourth quarter to put the game away.

“I love coaching these girls,” Johnson added. “I think our ceiling is really high, because they come to work every day and they are very coachable. We’re still not a shiny product yet, but we are trending in the right direction.”