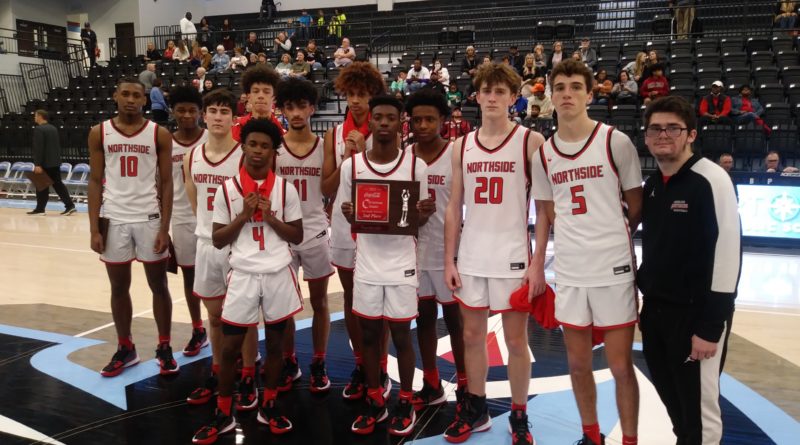 Oklahoma school Putnam City West made half of its 12 3’s for the game in that second quarter, enabling the Patriots to build a huge lead. The Grizzlies made things interesting late, but PC West did enough in the end to claim a 73-59 win in the title game of the Coca-Cola Classic on Thursday night at Southside High School.

“First of all, let me say, they shot the ball unbelievably,” Northside coach Eric Burnett said. “Their coach (Lenny Bert) just told me they hadn’t hit more than four 3’s all year long in a game and they hit a bunch of them.

“That’s hard to beat people unless you’re hot just like that. But you’ve got to take your hat off to them; they did what they had to do and they shot the ball unbelievable.”

PC West’s prowess from beyond the arc in the second quarter occurred after an entertaining first quarter, in which the Grizzlies trailed by one, 12-11.

The Patriots (9-1) started the second quarter with back-to-back 3’s, from Carlsheon Young and Jordan Warrior. They added four more 3’s by the end of the opening half, including senior JaJuan Moore nailing a 3 from the corner as time was running out in the first half, extending PC West’s lead to 13 at the half, 34-21.

Northside got a boost early in the second half from senior Sam Roper, who hit back-to-back 3’s to get the Grizzlies within nine, 36-27.

Then another 3, this from Orian Scales, gave PC West its largest advantage at 26 points late in the third, as the Patriots went up 60-34.

Down by 21 entering the final quarter, Northside made one big push.

The Grizzlies closed to within seven points twice, the latter 66-59 on two Roper free throws with 3:04 left. They also got the ball back when Dae’Marion Savoy drew a charge.

But Northside turned the ball over on its ensuing possession, leading to a PC West free throw, and another Grizzly turnover moments later set up a basket as the Patriots withstood the late surge.

“I’m proud of my kids,” Burnett said. “They didn’t quit and they kept playing hard to the end and they cut it to seven and had chances at the end and let a couple of things slip away, but I was proud of the way we fought them.

“We have gotten a lot better. Three weeks ago, I wouldn’t have thought we would have played like we played the last three games. But I like what I see going into Tuesday’s first conference game.”

Scales and Young, a freshman, each had 15 points for the Patriots. The two also combined to go 5-of-5 from 3-point range.

Warrior added 14 points on 5-of-10 shooting, including a pair of 3’s. He was named the tournament’s MVP.

Northside junior Jayvion Smith led all scorers with 17 points, and he was 7-of-9 from the field. Savoy added 12 points and went a perfect 6-of-6 from the free-throw line, while Danarion Whitmore, another junior, finished with 11 points.

The Grizzlies (7-8) return home on Tuesday to start 6A-Central play by taking on Bryant.

“We had to play a really tough schedule because we’ve got a bunch of guys who’ve never been thrown into the fire for us, so we had to throw them in the fires and see how they respond, and let them feel that pressure of some really, really good teams,” Burnett said. “So I think what we did helped us the last three ballgames to do what we did.

“We’ve got a long way to go to get to where we need to, but I like the step we made (Thursday).”