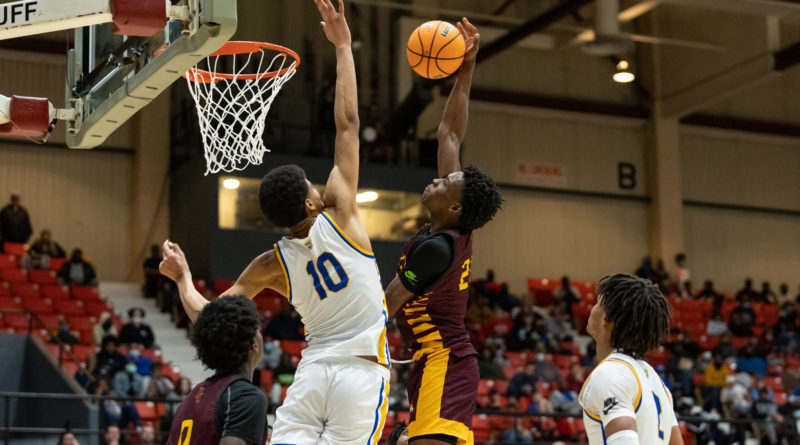 PINE BLUFF — North Little Rock won the King Bracket of the King Cotton Classic, but Beaumont (Texas) United made sure they earned it.

The Charging Wildcats, who won their previous two games by a combined 48 points over Calvary Baptist (La.) and Cane Ridge (Tenn.), won 82-72, but had to withstand a late Beaumont rally to put the game away.

“We didn’t win the Jonesboro tournament, and the City of Palms [Tournament] was unreal, and we won a couple of games there,” Rice said.  “Coming back to Arkansas was kind of like a home game. We haven’t had many of those. The kids have had a lot of pressure on them, and they stepped up this week.”

The Timberwolves kept up the momentum when Yates made a 3-pointer to get it down to 72-68.

The Charging Wildcats finally stopped the run when Smith, who was named Tournament MVP with 33 points and 3 rebounds, made two free throws at the 2:14 mark when Kayde Dotson fouled out to make it 74-68.

After a missed 3-pointer by Yates, Smith scored in transition to make it 76-68. But Beaumont wasn’t through,  Cameron Mickles rebounded a miss by Yates to close it to 76-70 with 1:29 to play.

Kel’el Ware answered at the 1:02 mark scoring off a pass from Ty Fredrick. Fouled by Arceneaux in the process, Ware made the free throw to make it 79-70.

“We just came out and competed,” Smith said .”That’s really what it boiled down to — we competed. That’s all there is to it. [Beaumont] is a good team, and we had to compete to beat them.”

“That’s a pretty good accomplishment beating them,” Ware added. “They’re a great team and knows how to win.”

In addition to Smith, Washington had 23 points on 9-of-12 shooting with 10 rebounds and 6 assists. Ware had 17 points with 6 rebounds.

North Little Rock dominated the foul line, shooting 20-of-31 while Beaumont was 11-of-14.

“Whenever we play in Arkansas, it is like a home game,” Smith said. “It was great playing in front of family and friends, but we have to play well even when we are at home. We came out and played well tonight.

“We don’t really care who we are playing, we are going to try to take their heads off,” Smith said. “We are going to come out and compete. We need to make less mistakes and be more disciplined. Our main goal is get a championship at the end of the year.”