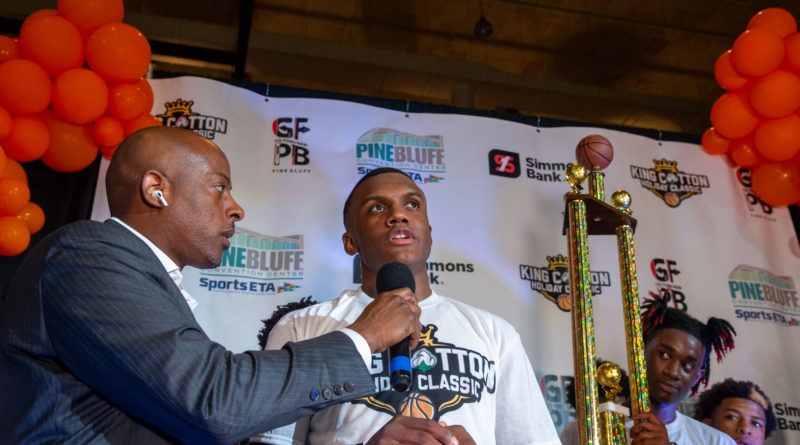 PINE BLUFF — When the game was on the line, Derrian Ford came through for the Magnolia Panthers in a 67-58 victory over Little Rock Parkview in the Creed Bracket Championship of the King Cotton Classic at the Pine Bluff Convention Center.

With Magnolia holding a 59-58 lead after Parkview’s Nate Coley made one of two free throws with 1:31 left after the Panthers had a shot clock violation on its previous possession, Ford drove to the basket with 1:20 left to put the Panthers up 61-58, ending Parkview’s last threat as the Patriots did not score for the rest of the game.

After Parkview’s Addison Shelton missed after getting a pass from Cameron Wallace, Nevi Tell made two free throws with 48.7 seconds left to make it 63-58.

Following a missed three pointer by Parkview’s Dallas Thomas, Ford made two more free throws with 32.4 seconds left to make it 65-58 and Devonta Walker closed out the Patriots with two more at the line with 3.4 seconds left.

“Derrian came over here and the first two games, he did not feel right and wasn’t shooting well, but as I told the team in the locker room, he is like [former New York Yankees closer] Mariano Rivera. He’s the ultimate closer,” said Magnolia Coach Ben Lindsey.

Ford finished with 29 points, 14 rebounds and 5 assists while shooting 10 of 24 from the floor and 7-of-10 from the foul line, earning MVP honors for the Creed Bracket.

“As coaches, when you play three games in three days, you never know what to do whether to keep the players off their feet or practice as usual and this morning we had an hour shoot around and he spent a lot of time working on whatever was bothering him the previous two days,” Lindsey said

Ford said, “I hadn’t been playing my game for a while and to play this felt special.”

Parkview Coach Scotty Thurman said, “I’ve seen him play before. I’ve seen him play since he was a younger kid. I don’t think their team is better than ours. He did a good job staying within himself and making the guys around him better.”

The Patriots trailed 59-50 with 4:00 to go before Coley made a 3-pointer to close to 59-53. Parkview’s Cameron Wallace, who had been scoreless up until that point, then rebounded Miller’s miss to make it 59-55.

After a timeout called by Lindsey, Wallace had a steal and dunk to get to 59-57. After Magnolia was called for a shot-clock violation, Coley made one-of-two free throws to close to 59-58 before Magnolia took over.

“We started to press a little bit,” Thurman said. “We wanted to do it earlier, but we had some guys in foul trouble. We just didn’t  have it tonight. We didn’t shoot the way we are capable of, and we didn’t rebound the basketball worth a flip.”

“We made a good comeback, but we are a lot better team than we showed,” Thurman said. “We showed some inexperience. [Magnolia] has some young players, but they are battle tested. We need to understand the type intensity you have to play with in a game like this.”

Winning the Creed Bracket was more than Lindsey was expecting. “To be honest, when we came in here, we were hoping to win a game,” he said.”This was a huge win, and we will celebrate this for a few days but then we have conference play starting and our goal is to win the trophy at the end of March, [referring to the state championship.]”

Thurman wasn’t content with the 2-1 record and runner-up finish but knows it will help his club as they pursue a state title.

“This was definitely a good test. Our schedule has been pretty demanding all season so far. We did go 2-1. We will take it. It’s not the prize we wanted, but at the same time we will keep working to get better.”

Watson Chapel held on for a one-point victory over Calvary Baptist in the consolation game in the King Bracket.

After Chase Stripland made a jumper with 37 seconds left to get Calvary Baptist to within one point, the Wildcats missed chances to seal the victory, but missed three free throws down the stretch.

Tremaine Dixon scored 15 points and had 3 assists to lead the Raymond Rangers to a victory over the Zebras in the King Bracket consolation game.

Jordon Harris led the Zebras with 13 points and 8 rebounds while Courtney Crutchfield had 12 points and 5 rebounds.

Decedric Webb’s tip in with 22 seconds left lifted Shreveport Huntington to a two-point victory over Goose Creek Memorial in a consolation game in the Creed Bracket.

Goose Creek had a chance to win with four seconds left, but Dariyon Williams missed a three pointer.

Webb led Huntington with 18 points while making 9-of-14 shots from the floor and grabbing 13 rebounds. Rayshun McCullar finished with 16 points on 6-of-17 shooting, but grabbed 5 rebounds. Devin Myers had 14 points for Huntington.

Aaron Williams Jr. led Hightower with 24 points in a 15-point victory over White Hall in a consolation game I the Creed Bracket.

Wiliams shot 10-of-13 from the floor while making 4-of-5 three-pointers.

Leading 16-15 after the first quarter, the Hurricanes outscored the Bulldogs 13-4 in the second quarter to take a 29-19 halftime lead.

Keaton Stone led White Hall with 13 points while shooting 5-of-11 from the floor.,