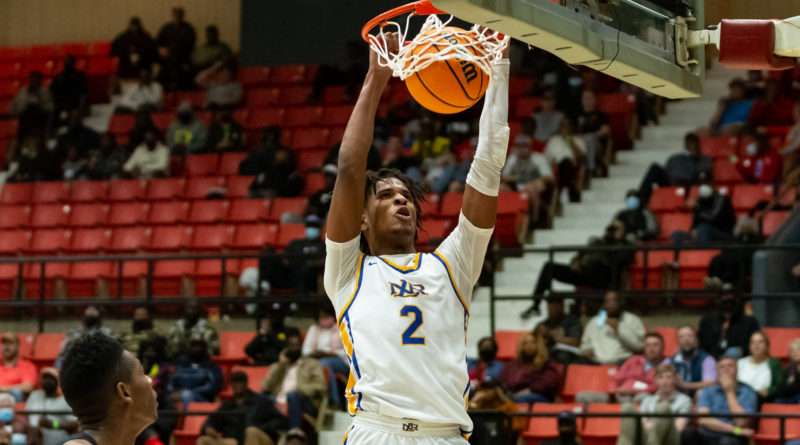 PINE BLUFF — North Little Rock used a quick start and never let up in an 86-59 victory over Cane Ridge (Tenn.) in the semifinals of the King Bracket in the King Cotton Classic at the Pine Bluff Convention Center.

After Cane Ridge closed to 41-31 at halftime, North Little Rock pushed it to 61-42 before a three pointer by Cane Ridge’s Brandon Miller, an Alabama signee who led all scorers with 33 points on 11-of-25 shooting, including 5-of-8 three pointers, got it down to 61-45 at the end of the third quarter.

North Little Rock outscored Cane Ridge 25-14 in the fourth quarter, taking the starters out with 1:57 to play.

“We had a good start and then we went through a stretch late in the first quarter and at the start of the second where we didn’t play that hard,” said North Little Rock Coach Johnny Rice. “It was something I could deal with at halftime.”

The Charging Wildcats will meet Beaumont (Texas) United in the championship at 8:30 p.m. Wednesday.

“Getting everybody’s best shot is something that comes with the territory,” said North Little Rock guard Nick Smith, who signed with Arkansas in November. “We have to block out the noise and not let it get to big and get a win. I don’t know much about Beaumont, but we’re going to watch film on them and go out there and compete.”

Rice added, “Getting everyone’s best shot, It’s been that way for the past few years, but it’s even bigger this year. We know we are everybody’s Super Bowl and we know we have to be a little tougher because we’re playing the most competitive schedule we can.”

“Kel’el is the advantage we have because he is 7 foot,” Rice said. “When we play in the half court and he is working for the ball and we get it to him, we’re a pretty good team. We didn’t do that in the first half, but we did in the second.”

Miller, who played AAU basketball with Smith, blocked Smith’s shot before the North Little Rock starters came out of the game, said, “North Little Rock has a great team and we were hoping to compete with them. They have one of the best players in the country in Nick Smith, and they were going to make us work for it. Hopefully, we can come back and get a win tomorrow.”

The Lions will play in a final loser’s bracket against De La Salle (Chicago) at 3:15 Wednesday. De La Salle, who is 0-2 in the tournament, lost  to Fort Bend High Tower (Texas) in overtime in another loser’s bracket game Tuesday.

White Hall had no answer for Robert Lewis. The 6-foot-8 forward had a distinct height advantage inside and scored 32 points on 13-of-16 shooting and also grabbed 8 boards. Nashawn Davis added 15 points.

The Bulldogs were led by Jai’Chaun Hayes’ 22 points. He also added 5 rebounds and 3 assists.

Jabarie Robinson scored 15 points, had 3 rebounds and 3 assists to lead lead the Raymond Rangers to a victory in the King Bracket consolation bracket victory over Watson Chapel.

Tremaine Dixon had 11 points, 3 rebounds and 4 assists and Eric Paymon had 10 points and 5 rebounds.

Raymond shot 43 percent from the floor while holding holding Watson Chapel to 35 percent. Raymond scored 19 points off 16 Watson Chapel turnovers and won despite getting outreboinded 31-29.

Courtney Crutchfield scored 22 points while shooting 10-of-20 from the floor and had 6 rebounds in leading the Zebras to a victory over Calvary Baptist (La.) in the King bracket consolation round.

X’Zeavion Barnett had 11 points and Troy’reon Ramos had 10 for the Zebras, who shot 43 percent from the floor.

Walter Williams, Jr. led Calvary Baptist with 27 points and 6 rebounds while shooting 10-of-16 from the floor. Kameron Kennon Jr. had 11 points and 8 rebounds. Martin McDowel had 10 points and 6 assists.

Aaron Williams Jr. and Ja’Cory Chatman had 18 points to lead Fort Bend Hightower to an overtime victory over De La Salle in a consolation seminal game in the Creed Bracket.

Hightower trailed 14-12 after the first quarter before leading 28-26 at halftime and 37-36 after three quarters. The game was tied 50-5 after regulation. In overtime, Williams made two free throws with 3:57 left to give Fort Bend the lead for good before Chatman made a three pointer at the 3:17 mark to stretch the lead to five. Chatman made a layup with 1:52 left to put Hightower up 59-52 keeping De La Salle from getting any closer.

Jianna Morris scored 19 points had 5 rebounds and 4 assists in leading Sylvan Hills to a 20-point victory over Huntington.

Karyn Morgan had 16 points while shooting 6-of-13 from the floor and Jayla Stirgus had 13 points, 7 rebounds and 7 assists. Courtney Sell had 10 points and 5 rebounds.

Sylvan Hills trailed 17-8 after the fist quarter before outscoring Huntington 16-8 in the second quarter to close 25-24. The Lady Bears outscored Huntington 43-22 in the second half to put the game away.