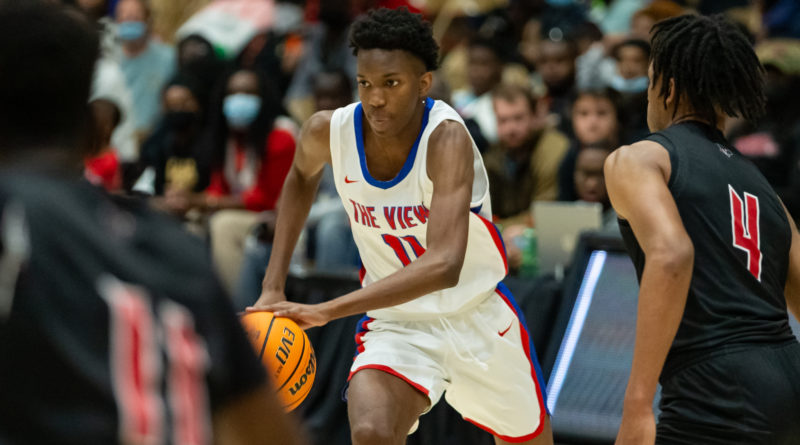 By Jeff Halpern and Nate Olson | Photos by Tommy Land

PINE BLUFF — The Little Rock Parkview Patriots didn’t waste any time in earning a trip to the final of the Creed Bracket in the King Cotton Classic on Tuesday night at the Pine Bluff Convention Center.

The Patriots blew out Goose Creek Memorial (Texas) 87-46, putting the Arkansas Activities Association’s sportsmanship rule into effect in the last two minutes of the third quarter.

Parkview will play Magnolia at 6:45 p.m. Wednesday in the championship final.

“I’m very proud of our team,” said Parkivew coach Scotty Thurman. “We came out focused and played with a lot of energy and shared the basketball, which is one thing I’ve been preaching all year.”

The Patriots were led by Cameron Wallace, who had 24 points and six rebounds, shooting 10 of 10 from the field and 3 of 3 from the line. Jaylen Thomas Miller finished with 14 points on 6-of-13 shooting with six rebounds. Carson Backus had 13 points on 5-of-7 shooting and Dallas Thomas had 12 points on 4-of-5 shooting, including 3 of 4 on three pointers.

As a team, the Patriots shot 35 of 51 from the field, including 12 of 18 on three-pointers, outrebounded Goose Creek 28-20 and collected 12 turnovers while scoring 10 points off the turnovers.

Goose Creek shot 17 of 45 from the field, including 3 of 15 on three-pointers. Sam Bradford led Goose Creek with 14 points. Darius Woodson and Avant Coleman both had 10 points.

“We had to come out and play hard. We knew if we did that, we wouldn’t have to worry about anything else,” Wallace said.

When asked about Magnolia, Thurman said, “We’re excited to play them. We know they have Derrian Ford [Razorbacks signee] and a bunch of good players. We’ve played a tough schedule and that’s by design. We know we have to come out play our best so we can have a good show.”

Arkansas signee Derrian Ford didn’t play his best game in the Creed Bracket semifinal win, but the rest of his teammates did. Ford only scored five fist-half points, but the Panthers led by 13 points at halftime and by double-digits most of the second half.

“What I saw tonight is what I see in practice, and what I see most of the time,” Magnolia coach Ben Lindsey said. “We played good team defense and got the rebound, and pushed it and got easy baskets at the other end.”

Ford finished with 13 points on 1-of-12 shooting. Normally a dead-eye free-throw shooter, he was 11 of 21 from the line.

“It got in his head, he got tired, and he started aiming it,” Lindsey said. “It’s like a pitcher (in baseball) or golfer — it’s mental. Aiming it just makes it worse.”

“Everybody played well; you never know who will have a bad game,” Ford said. “I just wasn’t making shots, but you have to give credit to guys like Adrian Walker. We have a great program. You can’t just stop one of us.

“The movement [on offense] was great, and I think we can move even better. We will be ready for the championship game.”

“We’ve got his back, just like he has our back,” he said. “He’s a great player, but he doesn’t have to do it by himself. He has some great teammates around him.”

Magnolia trailed 14-13 after the first quarter but outscored Huntington 22-8 in the second period to take control of the game. The Panthers went on a 7-0 run and Adrien Walker capped it with one of his two three-pointers on the night, and Magnolia led 27-16 with a little less than four minutes to go in the half.

Magnolia built a halftime lead of 35-22, and Huntington never really threatened in the third quarter as the Panthers led 51-38 heading to the fourth.

Huntington chipped into the lead in the final minute as Ford’s free throw woes continued and they hit a couple of late buckets.

“We got tired,” Lindsey said.