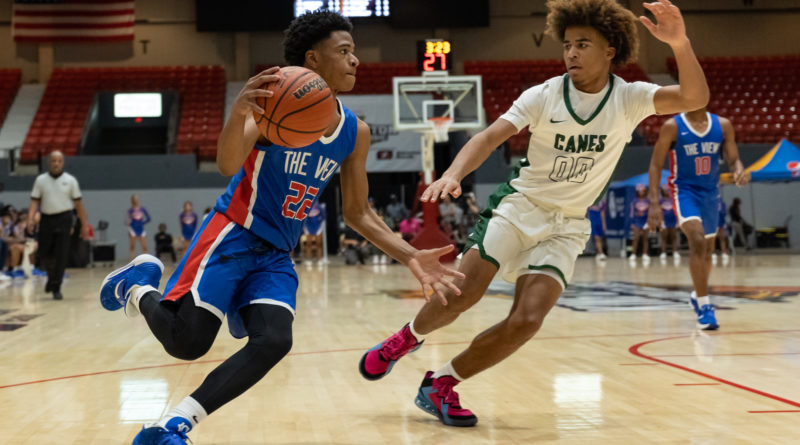 PINE BLUFF — North Little Rock jumped to a 26-7 lead and never looked back, routing Calvary Baptist (Shreveport, La.) 77-46 on Monday night at the Pine Bluff Convention Center in the opening round of the King Bracket at the King Cotton Classic.

Smith and Ware get the headlines on the nationally ranked team, but Monday the Charging Wildcats showed their depth.

“[The other players] are actually doing good,” Ware said. “We played well together tonight.”

The Charging Wildcats are playing their second holiday tournament this month. They took sixth in the City of Palms tournament in Fort Lauderdale, Fla., playing some of the premier programs in the country, including IMG Academy. Calvary Baptist is one of the top small schools in Louisiana, and looking ahead NLR could play Cane Ridge (Tenn.), one of the top teams in that state with Alabama signee Brandon Miler, and beyond that, Beaumont, Texas, or Christian Brothers College High School.

Beaumont went 31-0 last season on its way to the Texas Class 5A state championship. CBC is the defending back-to-back Class 5A Missouri state champion.

“It’s exciting playing these teams, and it’s great for the state of Arkansas,” Smith said. “We are representing the state.”

In a nip-and-tuck affair, the Patriots hung on with free throws down the stretch to take the win in the Creed Bracket. A trio of Patriots had 12 points to pace the scoring, including Cameron Wallace, Dallas Thomas and Addison Shelton. Darius Miller added 11. Wallace pulled down four rebounds and added three blocks. Thomas chipped in four rebounds.

The Patriots will play Goose Creek (Baytown, Texas) at 8:15 p.m. Tuesday in a semifinal game.

Dariyus Woodson poured in 23 points and Sam Bradford had 21 as Goose Creek rolled to an easy win. The Patriots led by seven at halftime and lengthened their lead by outscoring De LaSalle 23-16 in the third quarter. Woodson and Bradford each snagged seven rebounds apiece. Dariyon Williams added 10 points for Goose Creek.

DaJuan Bates, one of the top seniors in the Chicago area, led all scorers with 35 points.

Christian Brothers College was without two starters and its head coach but still managed to get past Raymond (Miss.) 63-54 in the first round of the King bracket.

Senior Robert Martin, who is receiving some college interest, shouldered more of the burden, scoring 21 points and dishing out eight assists while collecting four rebounds.

Sophomore Division I prospect John Bol, who stands 7-foot-2, was 7 for 7 from the field and finished with 15 points, 11 rebounds and seven blocks.

White Hall hung around with Huntington into the third quarter but couldn’t make a threatening run in the final period.

Brandon Miller, an Alabama signee, hit a three-pointer with 56.5 seconds left to give Cane Ridge a 56-55 lead. Pine Bluff had a chance to take the lead on the next possession but missed two shots. Forced to foul, Cane Ridge padded its lead with a pair of free throws and escaped.

Miller led all scorers with 34 points and grabbed nine rebounds.

Karsyn Morgan poured in a game-high 19 points to lead the Bears to a 60-52 win over Hutchison.

Sylvan Hills led 35-25 at halftime and 56-41 at the end of the third quarter. Despite being outscored 11-4 in the fourth quarter, Sylvan Hills held on for the win.