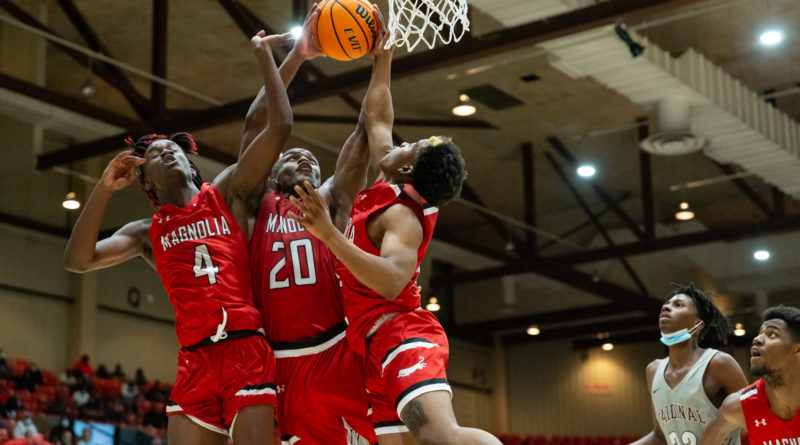 PINE BLUFF — Magnolia trailed Cardinal Ritter by 13 points in the first half and didn’t take its first lead until just over six minutes to go in the game but pulled out a 55-47 victory.

“I don’t think we ever got frustrated; I just knew I could make shots that I wasn’t making,” said Ford, who finished with 24 points and committed just one turnover in the second half. “We did a good job coming back, and I think we showed everybody we could play through adversity.”

In the second quarter, Magnolia switched to a zone defense, which helped close the gap at the half and paved the way for the second-half run.

“Starting out in man and having to rotate over, [Cardinal Ritter] was playing volleyball in there,” Magnolia coach Ben Lindsey said. “They were tipping it around before we changed it up.”

Lindsey also used the halftime break to reassure his team.

“That’s something we don’t see a lot … (we) were like deer in headlights to start the game. They have some dudes. At halftime, I told them, ‘The worst thing that can happen is we are going to lose. We had Christmas, and we are going to have spring break, but you’ve got to go out and play.’”

Magnolia, which has now won 61 of its past 62 games, faces Shreveport, La., Huntington Tuesday at 5:45 in the Creed bracket semifinals.

“I think we will come out playing better, I just worry about our stamina,” Lindsey said. “We aren’t real deep right now, so those legs might go out on us. I think mentally, we will be more prepared playing a game [at the Convention Center], and we will try to hold on.”

Braxton Stacker, a Murray State signee, gave Cardinal Ritter a 40-35 lead heading to the fourth quarter with two free throws with .7 second left in the third.

However, Magnolia began the fourth quarter with a 6-0 run fueled by two buckets by Ford. He capped the run with a steal and layup and gave the Panthers their first lead of the game with 6:28 remaining.

Moments later, Ford, who grabbed six rebounds and dished out two assists, drew a non-shooting foul with the Panthers in the bonus and made both shots to tie the score.

Magnolia took the lead for good when Devonta Walker, who chipped in 13 points and nine rebounds, hit two free throws to give the Panthers a 49-47 lead with 1:51 to play.

“Devonta Walker is a great player, and he showed it tonight,” Ford said. “He made some big plays for us.”

Down the stretch, Magnolia hit four straight foul shots and added a basket at the horn to stretch the lead.

“[Cardinal Ritter] is a wonderful team — you have to give them a lot of credit,” Walker said. “To beat a team like that makes a major statement for us. Defense wins championships, and we did what we had to do in the second half.”