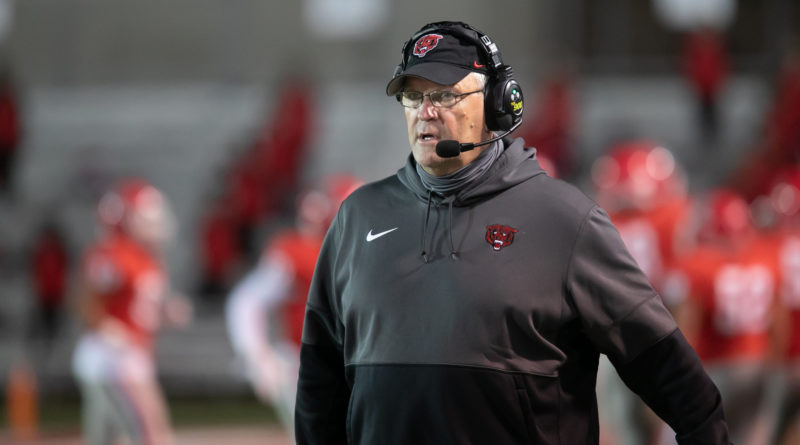 Mike Falleur had a good thing going as a successful high school football coach in Georgia.

Falleur, who recently announced his retirement after nine seasons of guiding the Grizzlies, did just that by returning Northside to relevancy.

Now, on the surface, it may not appear that Falleur did phenomenal work with the Grizzlies.

His record with Northside was just one game above .500 at 50-49-1. He never got to lead the Grizzlies to the state championship, nor did he get to take them to War Memorial Stadium to play for a championship.

But when Falleur made the decision to return home, the Grizzlies were in a period of steady decline.

They were coming off of four straight losing seasons. There were some players that were roaming the halls of the school who weren’t playing football. And to make matters worse, they hadn’t beaten their crosstown rival, Southside, since 2005.

What Falleur did was help restore pride in the Grizzlies. It was evident even in his first season, 2013.

Though Northside went 3-6-1 that season, they were fairly competitive. The Grizzlies tied longtime rival Pine Bluff and won two of their last four games of the season, with those two losses coming by a combined seven points, including a 14-10 decision to Southside in the season finale.

The Grizzlies went on to win four straight games to start the season, including a win against Sebastian County power Greenwood. Northside also started the season 8-1 before another loss to Southside, though the Grizzlies captured an opening-round playoff win against Little Rock Catholic.

It was another breakthrough year for the Grizzlies in 2016, as they won seven games and reached the state quarterfinals. But their biggest highlight was finally beating Southside, breaking the hex its crosstown rival put on them for more than a decade.

On that note, that was perhaps another reason Northside couldn’t quite get over the hump and reach Little Rock under Falleur.

The Grizzlies had the misfortune to be playing in the same conference, the 7A-Central, with a Bryant team that is currently in the midst of a dynasty, as well as the great North Little Rock squads of recent years. Plus, other schools like Conway and Cabot were fielding strong clubs of late.

But when you went up against a Mike Falleur-coached Northside team, chances were you were going to be in for a long night, regardless of the final outcome. He had the Grizzlies playing very physical and very tenacious and they were going to fight all the way to the end.

Northside also had more than its fair share of big wins under Falleur. The 2014 win against Pine Bluff. Beating Greenwood in both 2018 and 2021 after the Bulldogs had won state each of the previous seasons. Going up to Bentonville and winning a quarterfinal playoff in 2018.

And incidentally, Northside hasn’t lost to Southside since that watershed 2016 game. The Grizzlies have currently won six straight games against the Mavericks.

Falleur also had a few players who went on to the next level and beyond, such as Tre Norwood, who played quarterback his senior season, 2016. He went on to play defensive back at Oklahoma and is a rookie standout for the Pittsburgh Steelers despite being drafted in the seventh round. Or Kiondre Thomas, who played college ball at both Minnesota and Kansas State and made the Los Angeles Chargers’ roster this season as a defensive back.

There was also Derrick “Deuce” Wise, the quarterback on that 2018 semifinal squad who is now playing running back at Central Arkansas. Drey Norwood, Tre’s cousin, who is now playing defensive back at Texas A&M. Or offensive lineman Stevie Young, who won a national championship this June playing for Hutchinson (Kansas) Community College at, of all places, War Memorial Stadium.

So, with Falleur leaving Northside, the question now is who’s next to guide the Grizzlies, and who can be the person to take Northside to that proverbial next level.

One obvious in-house candidate might be Greg Kendrick, who finished his second season as offensive coordinator. He was also a former head coach at Charleston, having led the Tigers to state titles in 2013 and again in 2014, and previously served as an assistant under former legendary Arkansas high school coaches Gus Malzahn at Springdale and Rick Jones at Greenwood.

There’s also Curtis Curry, the defensive coordinator who Falleur knew from his Georgia days. Curry also came to Northside with Falleur and has established a good rapport with the players.

Or does Michael Beaumont, the Fort Smith Public Schools athletics director, go in a different direction?

He’s had recent experience landing a football coach, picking former Arkansas player Kim Dameron, who had more than 30 years of college coaching experience including a stint as head coach at Eastern Illinois, to guide Southside prior to the 2020 season.

And I’m pretty sure that there are a bunch of hot names, up-and-comers and established coaches, who would love the chance to get Northside back into title contention.

But credit must go to Falleur, along with his staff, for helping leave the Grizzlies in good shape for the next guy to come aboard.

And from a personal standpoint, having covered the Grizzlies for several seasons in my former job as a sportswriter for the Fort Smith newspaper, I always enjoyed interacting with Falleur. Sometimes, we didn’t always talk about football.

For instance, he was interested in hearing about the trips that I have taken with my wife. We have now run half-marathons in 49 of 50 states (all we have left is Alaska).

Because of his very busy schedule, Falleur never had the time to take off several days and really go somewhere. He and his wife were set to go on a big cruise in the summer of 2020.

Well, you know the rest. COVID-19 fouled up those plans.

Maybe with Falleur now enjoying retirement, he can now go on a few well-deserved vacation spots.

If so, I would definitely love to hear about it from him.