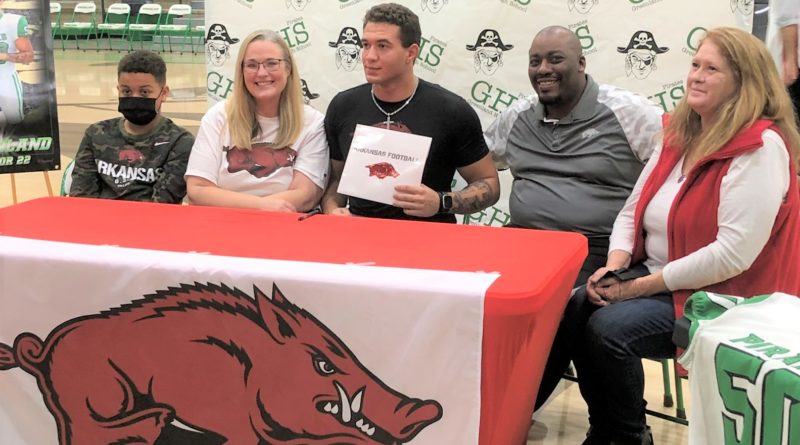 The Arkansas football team is getting more defensive help right from its own backyard.

In addition to signing two of the state’s top-ranked prospects out of Fayetteville High School on Wednesday, the Razorbacks got a couple more 3-star signatures from a pair of the area’s smaller schools.

Defensive end J.J. Hollingsworth of Greenland and linebacker Kaden Henley of Springdale’s Shiloh Christian both followed through on their pledges to join the Arkansas program, each putting ink to paper amongst family and classmates at their respective schools.

For Hollingsworth, it was a longtime dream come true, which actually began in the fourth grade when he began being coached and trained by former Razorback All-American linebacker Jermaine Petty in the Pop Warner league.

“I could see he was special early on, and he said he wanted to go on to play college football at the U of A,” Petty recalled. “I told him that we would put a game plan together. But it’s what you do when nobody is looking that’s going to get you to the next level. He believed in what I was saying and he bought in and worked his tail off to get himself in position to be where he is today.

“I just planted the seed in him, then stayed on him and constantly motivated him to stay on track and keep working hard, to push himself and get better.”

Petty, who coached Hollingsworth through Pop Warner, became the defensive line coach at Greenland High School two years ago, continuing to groom the youngster to be a Razorback. Petty is also his personal trainer.

“I can’t give Coach Petty enough credit,” Hollingsworth said. “There are not enough words to even explain how much he has contributed to me, and how much he means to me. And he’s more than just a trainer or a coach, he’s been there for me my whole life.”

The 6-foot-4, 250-pound Hollingsworth is ranked as the state’s No. 11 prospect  and was actually the first commit in the Razorbacks’ 2022 class back in July 2020. Often facing double teams this season, he tallied 63 tackles in nine games, including 3 sacks and 10 tackles for a loss.

“Today feels amazing, because I have been waiting on it for two years – well, really my whole life — so today it becomes official and it means everything to me,” Hollingsworth said. “It has taken a lot of work and determination, and I couldn’t have done it without my coaches, my teammates and just everybody’s support.”

Greenland coach Lee Larkan was all smiles Wednesday, watching the school’s first ever player to sign with the Razorbacks.

“I’m extremely proud for J.J., but I am also proud for the Greenland community and the high school,” Larkin said. “He was like me and so many others, growing up wanting to be a Hog, so when that dream is realized it’s huge for him. Now, the future is his.”

The 6-foot-2, 225-pound Henley was ranked as the No. 13 recruit  in the state, while leading the Saints to a 4A state championship last season and a state runner-up this season.

“This day has been a long time waiting, and this is a very special day for me to finally get to sign,” Henley said. “I’ve never really been the biggest, strongest or fastest one, but I have worked really hard to get to this point, which is all through the glory of God.”

The senior captain was fifth in the state with 150 tackles (10.7 per game), including 3 sacks and 26 tackles for a loss. He tallied 13 tackles in the Saints’ state championship loss to Joe T. Robinson on Dec. 11.

“From the moment he stepped on campus, I knew he was going to be a special player and a leader,” Shiloh Head Coach Jeff Conaway said. “And I have just watched him grow in all four areas that we consider our missions. He’s grown spiritually, he’s grown academically, he’s grown socially, and he’s grown athletically. He’s gifted and he’s put in the work and made the most of his opportunities in high school.

Henley has already gotten to know some of the other Arkansas signees in the area, and looks forward to being teammates with them.

“It’s awesome that we have so many great players right here in Northwest Arkansas, and I’m excited and honored to get to go out there and play with them,” he said. “They are great dudes. We have already started that relationship together and now we get to go play football together.

“I’m just looking forward to going out there and doing whatever they ask me to. Whatever I can do to help, I’ll do it. I attended every one of the Razorbacks’ home games this year and got to see them have a great year. So, I am ready to go have another great year with them next year.”