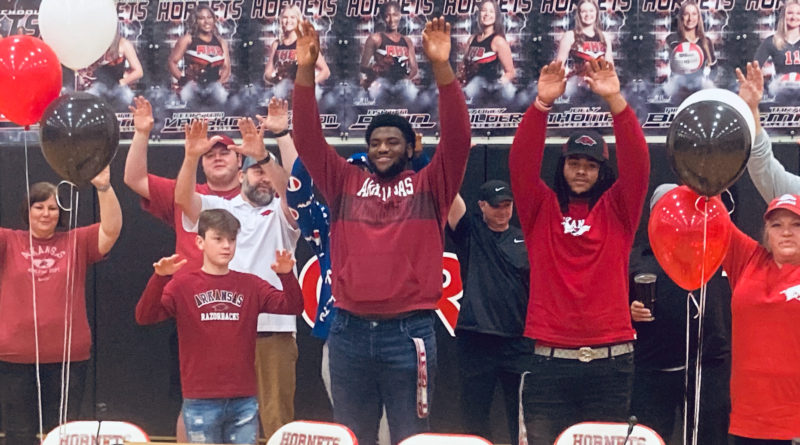 Andrew Chamblee and Nico Davillier have been teammates for only four years, but their friendship has grown strong in that time. They’ll continue that friendship in Fayetteville over the next four years as they both signed to play football at the University of Arkansas on Wednesday morning at the Maumelle High School gymnasium.

“We have only been playing together since ninth grade, but we have been playing against each other since youth ball and middle school,” said Chamblee, a 6-foot-6, 285-pound offensive tackle. “Just the bond and connection we have is unbelievable. It’s like that throughout the whole group chat [with all of the Hogs instate recruits].”

Both players had a long list of colleges to choose from, and they were both offered by Arkansas, Auburn and Colorado, among others.

“I think it made my decision easier because I knew that [Chamblee] was actually committed to the Hogs,” said Davillier, a 6-4, 275-pound defensive end. “With Andrew, working with him every day doing one-on-ones, that made both of us better. That was iron sharpening iron.”

The pair plans to room together, but Chamblee will have to wait on his friend. Chamblee is about to graduate from MHS and will enroll at Arkansas in mid-January. Davillier is a starting post player on Maumelle’s reigning Class 5A state championship runner-up basketball team and will finish out the school year.

“At first, I was like, ‘I can’t play because I want to leave early,’ but then they said I couldn’t leave early, so I talked to Coach [Sam] Pittman and Coach [Jermial] Ashley [Arkansas defensive line coach], and they said I could hoop and that it would keep me in shape and help my footwork and make me better all-around.”

While his teammate is trying to get back to the championship with a squad that added Magnolia star guard Colby Garland, Chamblee will be trying to get a jump on playing time with the Hogs.

“Hopefully, I can go there and play right away,” Chamblee said. “The plan is to get some snaps in during the spring game. Hopefully, that is still in effect with most of the O-line leaving.”

Davillier has designs on playing early as well and likes what he has seen from Barry Odom’s defense.

“They got a whole lot better over the past two years,” Davillier said. “This year, they were one of the top defenses to me, just the way they fly around to the ball and just play as a team. They listen to the coaches and are coachable. I just feel like I fit in well with that defense at Arkansas.”

The ceremony Wednesday morning was a proper celebration with podium speeches, a spread of food, including a Hog cake, and around 100 family, friends and MHS students. One special guest was Parkview senior running back James Jointer, who came to show his support to his friends and future teammates. His signing with Arkansas was scheduled for later in the day with teammates Jaylon White, who signed with Ole Miss, and offensive lineman Kyndall McKenzie, who signed with Memphis.

“I wanted to see two of my fellow friends, who are going to Arkansas,” Jointer said. “Nico, Andrew and I have been friends for a long time. I’ve known those guys since the eighth grade. I just want to be here to support them as they sign their letters.”

Living within the Litte Rock metro area, Jointer has contact with the Maumelle pair and E’Marion Harris, the big offensive lineman from Joe T. Robinson who signed with the Hogs on Wednesday afternoon.

“We hang out and text each other,” Jointer said. “Early in the season, if we had a bye week or they had one, we would go to the high school football games together. All of the in-state commits have a group chat and FaceTime. We talk every day, literally.”

The 10 in-state recruits represent the state well, and there are several that could make an immediate impact.

Like his friends, Jointer had plenty of options with Arkansas, Indiana, Arizona State, Arkansas State and Boston College leading a long list, but the decision was easy for him.

Arkansas used a stable of running backs this season and Jointer hopes to be in that rotation next year when he steps on campus.

“It’s all God’s plan, whatever God has lined out for me,” Jointer said. “I definitely feel confident finding a role in that rotation. Sometimes three running backs carried the ball.

Wednesday was another good memory for the Maumelle pair and Jointer. They hope this is one of many they will share together.

“It feels great,” Chamblee said. “All of my nerves are gone. I am just ready to get up on The Hill and work.”