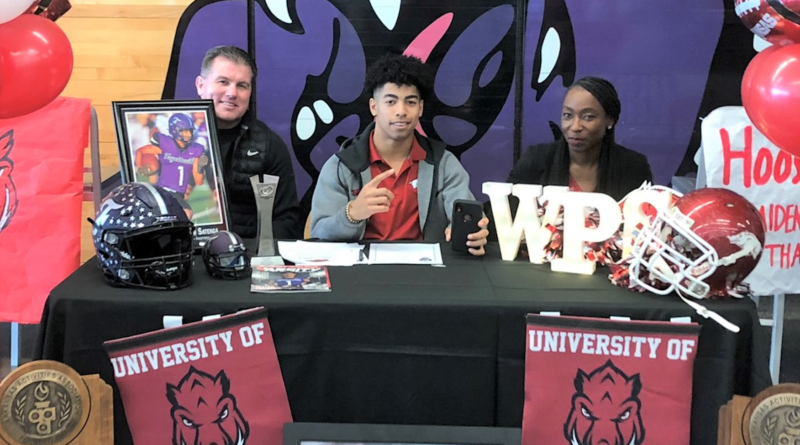 “These are all three special kids, and they each have a unique set of skills that makes them unbelievable people, on and off the field,” Fayetteville coach Casey Dick said. “They each offer something different, and each have their own story. But it has been awesome to see what all three of them have given to our program, our school, and ultimately, our community.”

The Bulldogs finished state runner-up in Class 7A this season, losing a heartbreaker to Bryant, 42-38, in the championship game on Dec. 4. Although Powell missed the second half of the season with a season-ending ACL and meniscus injury against Bentonville West on Sept. 24, all three players made key contributions to Fayetteville’s success.

“I think it is a tribute, first and foremost, to these kids and their families,” Dick said. “First, for allowing us to coach them, and secondly, for raising each of them with a unique work ethic.”

Despite facing double- and triple-team coverages throughout the year, the 5-foot-11, 165-pound Sategna led the state with 102 catches this season and was second nationally with 1,908 receiving yards and 20 touchdowns, including three scores on jet-sweep handoffs.

After initially committing to Texas A&M, then to Oregon, Sategna flipped his pledge to Arkansas on Nov. 3. Also a state champion sprinter and jumper, he will also participate for the Razorbacks legendary track and field program.

“First, I want to thank God, who is the reason I’m here, and I want to thank my family, my coaches, my teammates – I couldn’t have done it without all of them,” Sategna said. “Last summer I worked harder than I ever had, and I think it really helped to improve my game. A lot of people say I just have speed, so I took the offseason to really work hard at all of the other components of my game.

“It’s a big relief to finally sign, because the recruiting process is so stressful. It was pretty difficult for me, so I am glad that I have signed and it’s all over with.”

Sategna’s change of heart for the Razorbacks came after seeing what Coach Sam Pittman has been able to do with the program in a short time. Arkansas went from 3-7 in 2020 to 8-4 this season, with an upcoming berth in the Jan. 1 Outback Bowl against Penn State. That, and the close relationship he has developed with Arkansas receivers coach Kenny Guiton, is what led Sategna to choose the Hogs.

“The success Coach Pittman has had in two years, already, has been huge,” he said. “Oregon and Texas A&M have great programs, but I found out that I didn’t need to go that distance when I have a great program 10 minutes away.”

If you look at the list of the state’s top recruits, it’s littered with Arkansas commits, and that’s what Coach Pittman wanted. I think the program is just getting better and better, and I can’t wait to get there and start working.”

Dick, a former Arkansas quarterback, said Sategna’s unique set of skills is what sets him up to have a successful career at the next level.

“A lot of people just refer to him as the ‘fast kid,’ but he’s got so much more than that to offer, that a lot of people are getting ready to see,” Dick said. “He’s got some unreal ball skills, as far as some of the catches he has made, and he’s got the explosiveness. But where he has really gotten better is just his knack for playing receiver and developing his skills as a whole.”

The 6-foot-2, 230-pound Powell moved with his family to Fayetteville from Canton, Ohio, in August, just a month after committing to the Razorbacks. He made his official visit June 11 and liked everything he experienced.

“Mainly, I just really liked the family-feeling around here, with the coaches and the people in the area,” he said. “They made me feel like I was somebody that they wanted to get to know, not just some football player who was going to play for them. They made me and my family feel like family, and that spoke a lot to me.”

In the three-and-a-half games he played for the Bulldogs this season, Powell recorded 32 tackles, 1.5 sacks, 3 tackles for loss, 5 quarterback hurries, broke up a pass play, forced a fumble, and recovered a fumble.

As a junior at Canton’s McKinley High School in 2020, Powell tallied 81 tackles, 14 tackles for loss, 4 sacks, 2 forced fumbles and 7 quarterback pressures. He was named to the first team of the Division I All-Ohio football team by The Ohio Prep Sportswriters Association.

“Mani is a great football player, but what really makes him special is the way he has gotten here and been just an unbelievable kid,” Dick said. “Even though he has been injured most of the season, he has not missed a single practice or a single workout. He has hung in there and still been a leader for us.

“He is a typical (middle) linebacker that has the range, size and speed to excel at the next level. And on top of all that, he has a heart of gold for everybody around him. And that’s just awesome to see.”

Powell had surgery on Oct. 21 and plans to enroll at Arkansas in January to be ready for spring practices.

“It feels amazing to finally be able to make everything official,” Powell said. “It has given me an overwhelming feeling of joy to finally be a Razorback, and I am ready to get this journey started.

“Getting to this point has taken a lot of moments of focus, where I have had to dial in, put my head down, and work hard to accomplish everything I have wanted to accomplish. There have been a lot of times I have had to do things that I really didn’t want to do. But I think those are the things that have helped define me as a person and an athlete.”

The 6-foot-2, 218-pound Turner, who committed to the Hoosiers in March, finished his 3-year varsity career at Fayetteville with 259 tackles and 19 sacks. But it was his late interception in the end zone and 40-yard fumble recovery for a touchdown in the final seconds that helped Fayetteville defeat Conway, 28-21, in the state semifinals on Nov. 26.

“He is just a classic blue-collar worker, who could be told he couldn’t do something, then would prove you wrong 10 times out of 10,” Dick said with a laugh. “Just an incredible work ethic and leadership. He did an outstanding job of really leading our football team in every aspect of the game. Every time we needed a big play on defense, he always seemed to be in the mix somehow.

Turner said Indiana felt like the perfect place to continue his football career, especially with a chance to play early.

“I love the culture there, the head coach (Tom Allen), and I think I’ve got a good opportunity to step right in,” he said. “I have put in a lot of hard work that people don’t see. I have worked my butt off to get where I am, so now I’m just trusting the process.

“This is an awesome day, a dream come true, so let’s go do this thing.”