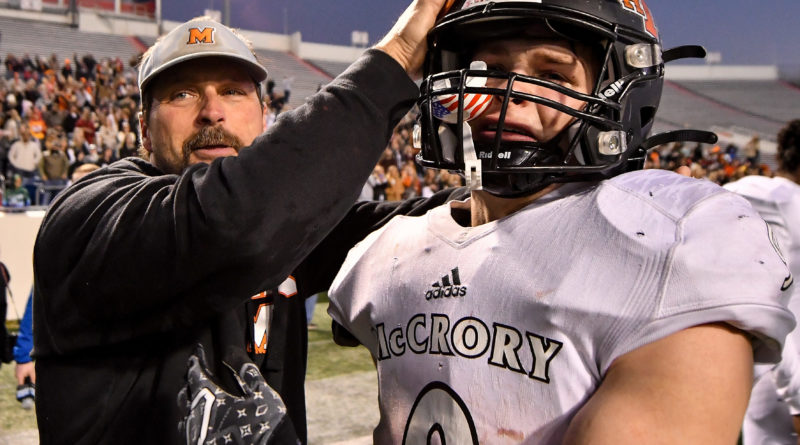 LITTLE ROCK — McCrory used a dominant defensive performance to clinch a 34-7 Class 2A championship game win against Fordyce on Sunday afternoon at War Memorial Stadium. The Jaguars notched their second state title and their first since 2015.

McCrory, which led 20-7 at halftime, forced two fumbles, returned an interception for a touchdown and turned the Redbugs over on downs five times. McCrory added another interception late in the game with the game well out of hand. Sunday was just the third time this season the Jaguars (14-1) held an opponent to seven points or fewer.

“What a game. I was so proud with how our kids came out,” McCrory coach Chris Kennon said. “I couldn’t be more pleased with them. We challenged them all week because we don’t cover the pass real good, and we got burnt on that last week. We addressed that this week, and they responded the best they could, and they did an excellent job.”

The Redbugs, the two-time defending Class 2A state champions, could muster only 232 yards of offense (133 yards rushing and 99 yards passing) and were shut out in the second half.

“I’m happy we got here, but I just wish we could have played better, and I wish I could have done a lot better job coaching,” Fordyce coach Tim Rodgers said. “I made some mistakes there in the first half. Instead of taking a knee and going into halftime down 12-7, I put us in a position where we were down by double digits. I told the kids, ‘That is on me.’ I have been doing this 38 years. I should have known better. Hopefully, I will learn my lesson. I just hate it for the kids. We got in a situation where we were so far behind.

“We kept trying to compete in the second half but kept making mistakes and doing thing we hadn’t done all year long. You have to give credit to McCrory. They are a good team. They have a lot of juniors and seniors who have played a lot the last few years, and they were the same way we were when we won in 2019. You have to give credit [to McCrory]. I am just proud of our guys getting here.”

The game, originally scheduled for Friday but postponed because of severe weather, was iced by the Jaguars with two defensive plays in the third quarter.

After McCrory’s first drive of the half stalled at the Redbugs 12-yard line, Fordyce took over but couldn’t get out of the shadow of the goal posts. A false start penalty pushed Fordyce back to its 7-yard line. Forced to punt from the Fordyce 8-yard line, the kick went straight up in the air and netted -6 yards. The Jaguars took over on the Fordyce 2-yard line and after a penalty scored in three plays when senior running back Reid Kennon dived in to put McCrory up 28-7 after he added the two-point run.

On Fordyce’s next possession, Redbugs quarterback Trey Merritt’s pass was intercepted by McCrory freshman Leevi Tucker, who darted 32-yards for the touchdown. Reid Kennon’s two-point conversion gave the Jaguars a commanding 34-7 lead with 2:11 to play in the third quarter.

“He’s a good kid,” said Chris Kennon of his son Reid. “He’s been a great kid for us, and the Lord has blessed us with two wonderful kids. His ability and work ethic is unbelievable. I never have to worry about anything he does or where he is at practice or anything else. The biggest thing is, he leads by example. He’s a quiet kid and just puts his team on his back and does everything he can to do what he can to make everybody around him better.”

Jaguars running back Latrael Neal led all rushers with 105 yards. Merritt led Fordyce with 73 yards rushing and was 10 of 27 passing for 99 yards and two interceptions.

The Jaguars struck first with 3:04 left in the first quarter. On a fourth-and-11 play on the Fordyce 38-yard line, McCory quarterback Cason Campbell, who passed for 72 yards and ran for a touchdown, hit a wide-open Reece Rushing, who took the pass to the 1-yard line. A play later, Reid Kennon plunged in for the score, but McCrory couldn’t convert on the two-point conversion pass, which was broken up, and the Jaguars held a 6-0 lead with 3:04 to play in the first quarter.

The Jaguars increased their lead when Merritt fumbled on the Redbugs’ 28-yard line. The officials ruled Merritt was down, but the replay official reversed the call, giving the ball to McCrory.

A play later, Reid Kennon sprinted 28 yards for a touchdown. After the two-point conversion was unsuccessful, the Jaguars led 12-0 with 8:51 to play in the half.

Fordyce finally got on the board with a 10-play, 63-yard drive that was capped by Jyrique Walker’s 16-yard run on a 4th-and-2 play with the ‘jumbo’ package employed. Andy Luna added the PAT and the Redbugs trailed 12-7 with 5:23 to play in the half.

The half ended with a series of bizarre events. McCrory drove to the Fordyce 11-yard line but Jacobie Walker ended the drive with an interception in the end zone.

However, Fordyce’s Tayshaun Childs, who carried the ball only once, fumbled at the Fordyce 19-yard line with 28 seconds remaining in the half.

The Jaguars moved inside the 10-yard line as the clock moved under 10 seconds. They got the play off, and Campbell weaved through the Fordyce defense and dived at the pylon as time ran out. The officials ruled Campbell had scored but after an official review, the ball was placed on the 1-yard line and one second was put back on the clock.

Campbell plunged in for the score as time ran out. Kennon added the two-point conversion and the Jaguars took the 20-7 halftime lead.

“That was a huge play for us,” Chis Kennon said. “With that halftime score, that gave our kids new life. We were here in 2015, and we let Rison score right before half, and we lost the momentum and had to hold on in the second half. The score right before the half, I knew was going to be huge because I have been on the other side of that before.”