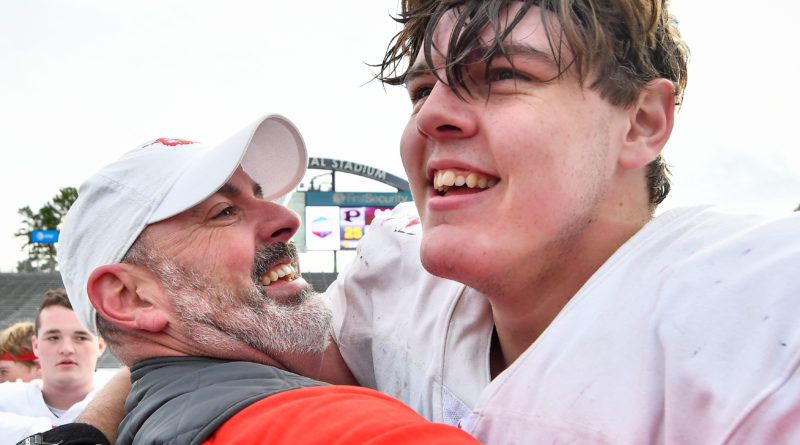 “It was a tale of two halves for us,” said Harding Academy coach Neil Evans. “It was just a tremendous job by our players for not panicking. A really good job by our staff. A lot of times in those situations, you try to abandon your game plan and start pressing, and I felt like we didn’t do that.”

The Wildcats scored on all four possessions in the third quarter, converted three turnovers into 16 points, out-gained the Curley Wolves 168-81 and kicker Kyle Ferrie, who had eight touchbacks, put three kickoffs into the end zone for touchbacks forcing the Curley Wolves to start on their 20.

“Their kicker is unbelievable,” said Prescott coach Brian Glass. “He’s the guy we feared the most going into the game. He is the biggest reason the game got to where it was. That guy kicked against the wind into the end zone. He was a a huge difference.”

“The field goals were big for us when the score was close, but his ability to put the ball into the end zone for touchbacks and make them go 80 yards was big and most games the opposing coach is talking about that being a factor.”

The Wildcats got the ball first to start the second half and mounted a 10-play, 64-yard drive that saw running back Andrew Miller, who rushed for 157 yards on 20 carries and caught 3 passes for 35 yards and 2 touchdowns, convert a fourth-and-one on the Prescott 24. The drive ended with Miller catching a 19-yard pass from MVP Kade Smith, the junior quarterback and University of Arkansas baseball commit, at the 8:52 mark. Ferrie’s kick was good making it 12-10.

“That guy has written an excellent story for himself,” said Evans of Smith. “His demeanor is unbelievable. It exemplifies him. The moment is never too big. He is the antithesis of me. Thank god, he is playing quarterback and not me.

Two plays later, Cooper Welch of Harding Academy pressured Prescott quarterback Carston Poole and Eli Wallis came up with the interception at the Curley Wolves’ 24. Three plays later, Smith scored from 10 yards out. The two-point conversion was no good and the Wildcats were up 16-12 at the 3:24 mark.

Five plays later, Kennedy Rush hit Poole and Welch recovered his first of two fumbles at the Harding 41. This time, the drive ended with a 36-yard field goal by Ferrie into the wind at the 3:52 mark to make the score 19-12.

Three plays later, Sikan Akpanudo picked off Poole  on a deep pass down the middle of the field at the Harding 42. The Wildcats needed one play to increase the lead when Smith found Landon Koch down the right sideline at the 3:11 mark. Ferrie’s kick was good and the score was 26-12.

Prescott finally got a touchdown drive going, marching 77 yards in 11 plays. It ended when Poole threw to right side to Jacaylon Zachery, who came back to the left side and beat the Harding defense for a 10-yard touchdown catch at the 11:14 mark of the the fourth quarter. The two-point conversion was no good, keeping Harding up 26-18.

The Wildcats needed four plays to go 61 yards with Miller rushing 40 yards on the first play and it ended with Smith scoring from 20 yards out, overcoming a holding penalty at the 9:32 mark. Ferrie’s kick was good making it 33-18.

Three plays later, Poole was sacked by Sam Butterfield, who caused a fumble which Welch recovered on the Prescott 2. One play later, Smith scored and Ferrie added the extra point to make it 40-18 at the 9:06 mark.

Prescott went for it on fourth and nine from its 21 when Poole was stopped two yards short of the first down. Four plays later with the Wildcats facing third and six from the seven, Smith threw to Miller in the left corner of the end zone. Ferrie’s kick made it 47-18.

Prescott closed out the scoring with 1:37 left when Zachery, who rushed for 165 yards on 10 carries, went around the right end for a 60-yard touchdown. Carlos Zacarias added the extra point to make it 47-25.

“Our kids played hard and had the lead in the first half. We got beat up and ran out of bodies” said Glass. “By the end of the first half, we were without Caleb Harris and Omarion Dickens, two other X-factors. It was tough. We had to dig deep for some young guys to step in and had some issues with personnel because of it.”

The Curley Wolves were without Jaylen Hopson, who missed the past three games with a broken leg. He ed the team in rushing with 1,879 yards and 30 touchdowns.

The Curley Wolves led 12-3 at halftime in which a 12 mph wind from north to south help contribute to all 15 points being scored in the south end zone.

After Prescott went three and out on its first possession of the game, Harding Academy took a 3-0 lead when Ferrie kicked a 27-yard field goal at the 7:10 mark of the first quarter.

The drive capped off a 9-play, 62-yard drive with the big play being 51-yard run by Smith that gave the Wildcats a first down at the Prescott 7 before a four-yard run by Miller and two runs for a loss of seven yards by Smith set up the field goal.

After a Prescott punt, Harding marched from its 27 to the Prescott 42 in seven plays before Ferrie came on for a 59-yard field goal attempt at the 3:11 mark. However, Ferrie’s attempt with the wind at his back fell short.

Prescott took advantage of a running-into-the-kicker penalty to take the lead. With the Curley Wolves facing fourth and six from its 24, Prescott lined up to punt, but the Wildcats were penalized, making it fourth and one from its 29. This time, the Curley Wolves went for it and Eric Grigsby picked up the first down with a 2-yard gain. Two plays later, Zachery took a direct snap and went around the left end for a 64-yard touchdown.  Zacarias’ extra point was no good and the Curley Wolves led 6-3 at the 11:47 mark of the second quarter.

The Curley Wolves took a 12-3 lead with 8 seconds left in the half when Poole rolled right and thew to the left corner of the end zone where he found Grigsby for a 10-yard touchdown on fourth and four. The score capped off a 7-play, 62-yard drive which was highlighted by a 46-yard deep pass from Poole to Omarion Dickens which gave the Curley Wolves a first down at the Harding Academy 16. Zacarias’ kick sailed to the left, keeping the score at 12-3.

“When you don’t play in a lot of tight games, there is a tendency to think something is wrong,” said Evans. “The only thing wrong is we were playing a very good opponent. I just had to convince them of that.”

Winning a third consecutive state title was one thing Evans said was going to take a while to set in.

“It’s one of those things where you look back on history and realize the significance of it.

“The big thing is about the relationship with the players. When it’s more than winning than what can you give me on the field and what are your intangibles then you end up with a locker room full of trust and love and if we lost this game, my message would have been the same.”