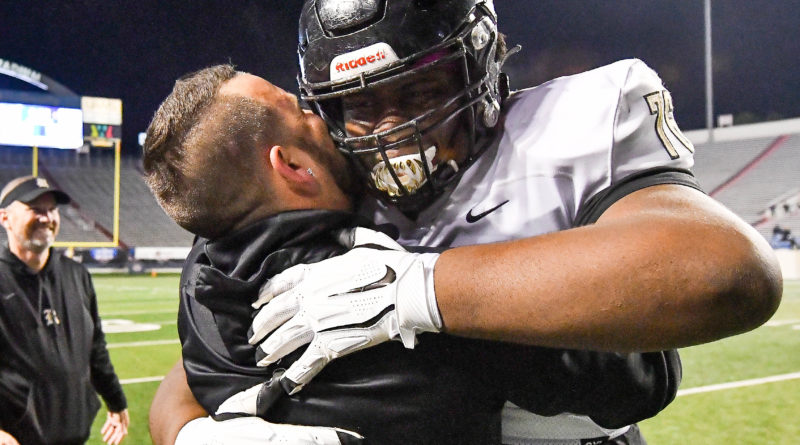 LITTLE ROCK  — A goal-line fumble symbolized the differences in Joe T. Robinson’s 42-14 victory over Shiloh Christian in the Class 4A state championship game Saturday night in front of 4,215 at War Memorial Stadium.

On the Saints’ first possession of the game, they marched from their 28 to the Robinson 4-yard line thanks to a 54-yard pas from Eli Wisdom to Cooper Hutchinson. After a 14-yard run from Ben Baker to the Robinson 5-yard line, Baker fumbled at the goal line and Julian Campos recovered in the end zone for the Senators.

Taking over on their 20, the Senators needed nine plays to go the distance with 35 coming on a pass from Jack Cleveland to Zach Wofford. Darryl Searcy, who was named MVP of the game with 120 yards rushing on 21 carries, carried the ball five times on the drive and scored from two yards out at the 7:21 mark. Alex Gabriel’s kick made it 7-0.

“That’s what great about the game of football,” said Shiloh Christian coach Jeff Conaway. “When you fumble the ball on the goal line, it’s hard to recover sometimes. The momentum did shift there. We weren’t able to regain that momentum. That’s a 14-point swing. You never want to start the game like that.”

“I think it hurt them a lot more than us,” he said. “We’ve had times where we’ve been hit in the mouth. It took some wind out of their sails. We march down and score and it hurt them.”

The Senators dominated the stat sheet, out-gaining the Saints 481-271, holding the ball for 18 more plays (67-49) along with an edge of 29:12 to 18:48 in time of possession. The Senators had 22 first downs to the Saints’ 12. They also collected four turnovers while not turning the ball over.

“Turnovers are always the difference in a championship game,” Eskola said. “Shiloh is an awesome team, and they had some bad breaks we were able to capitalize on. They are a phenomenal program and you’ve got to make sure you win the turnover battle.”

Cleveland completed 12-of-21 passes for 233 yards with 3 touchdowns. Wofford led the Senators with 6 receptions for 94 yards.

“Jack is the difference maker in our team,” Eskola said. “He never gets rattled. I’ve known him his whole life. He’s one you trust so much.

“Daryl been playing better and better all year’s He’s really shined during the playoffs.”

Wisdom completed 12-of-25 passes for 201 yards for Shiloh Christian with 1 touchdown and 2 interceptions. Hutchinson caught 4 passes for 93 yards.

After a Shiloh Christian punt, the Senators needed five plays to get in the end zone with Noah Freeman scoring from 47 yards out at the 4:06 mark. Gabriel’s kick made it 14-0.

After another Shiloh Christian punt, the Senators needed two plays to get in the end zone. This time, it was a 65-yard pass from Cleveland to Brandon Griel at the 2:27 mark. Gabriel’s kick made it 21-0.

The Saints’ next possession ended in a fumble when Wisdom threw to Hutchinson, who was hit from behind by Griel and G’Kyson Wright recovered, giving the Senators possession at the Shiloh Christian 48.

After a false-start penalty on fourth-and-one pushed the Senators back to the Saints’ 34, Searcy completed a halfback option pass to Wofford to the Saints’ 11. One play later, Cleveland found Kirby Owens in the back left corner of the end zone at the 9:20 mark of the second quarter. Gabriel’s extra point made it 28-0.

The Saints appeared to get a drive going, marching from its 37 to the Robinson 12, but Wisdom’s pass to Jacob Solomon on fourth-and-three was incomplete with 5:01 left in the half.

The Saints appeared to catch a break when Gabriel kneeled to field a low snap in punting formation, giving Shiloh Christian the ball at the Saints’ 5 at the 2:05 mark, but three plays later Wisdom was intercepted in the end zone by Anthony Freeman with 1:03 left.

Shiloh Christian appeared to have some momentum early in the second half. After stopping Searcy for no gain on fourth-and-one at the Robinson 34 with 10:01 left in the third quarter, the Saints needed four plays to get on the scoreboard when Bo Wiliams scored from a yard out at the 9:18 mark. The play was set up by a 17-yard pass from Wisdom to Williams three plays earlier. Caleb Anderson’s extra point made it 28-7.

Three plays later, Cleveland threw a pass to Wright, who lost control of the ball and Kaden Henley of Shiloh Christian recovered at the 8:23 mark at the Senators’ 48. However, the instant replay official changed the call to an incomplete pass. The Senators scored eight plays later on a 14-yard run by Wright at the 5:26 mark. Gabriel’s kick made it 35-7.

“That would have been a momentum swinger,” Connaway said. “I couldn’t get it. I’m not going to argue, but it looked like he made a move. We needed a big one there.”

Eskola said he believed the pass was incomplete after talking to his coaches in the booth. “I thought they got the call right,” Eskola said. “Our coaches in the booth were telling us they would reverse it. That would have been a big momentum change. We felt we had to keep plugging along. This team is special because they don’t panic.”

The Senators put the Arkansas Activities Association’s mercy rule into effect at the 1:13 mark of the third quarter when Cleveland completed a 42-yard touchdown pass to Ashtyn Williams along with Gabriel’s extra point.

Shiloh closed out the scoring with 6:47 left on a 33-yard pass from Wisdom to Jacob Solomon.

“We didn’t play good football. We were hoping to avoid turnovers and we didn’t do a good job of that. We didn’t play well defensively and gave up a few over the top of us,” said Conaway. “When it rains, it pours. It felt like we couldn’t do anything. That’s the game of football. When you turn it over, it’s very hard to win.”

Eskola said he sensed his team would play well after watching them warm up.

“I was proud of our kids tonight. I tell them don’t worry about who they are playing. “I told them to treat it like tests each week and told them this is their final exam.

“I expected our kids to play well. They were loose and didn’t want it to be a big stage. We were sure glad they did.”

With the Senators winning their second state title in three years and closing the season with 14 consecutive victories, Eskola said, “Everyone’s special and everyone’e different. We replaced 9 offensive starters and 8 defensive starters from last year. I’m very proud of our kids and the growth of our kids. It was tough to open with PA (The Senators opened the season with a 60-28 loss to Class 5A champion Pulaski Academy). We felt we needed a lot of reps and we got better.”