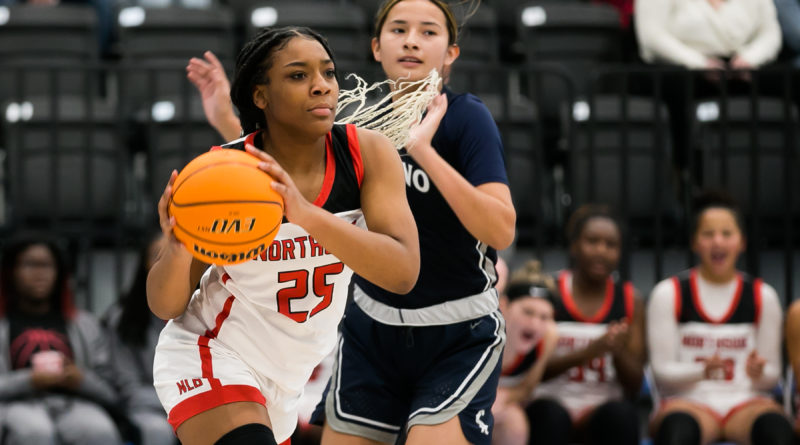 FORT SMITH — It might be a brand-new Northside girls basketball team than the one that won the 6A championship a season ago.

However, the Lady Bears have far from forgotten how to win games.

Tested in the second half of their first-round Taco Bell Tournament of Champions game Thursday, the Lady Bears made some big plays down the stretch to outlast Oklahoma 5A school El Reno, 60-54, at the Southside High School arena.

Thursday’s win improved the Lady Bears to 7-0, a season after winning their second state title in three seasons. They are also adjusting after losing standout players such as two Division I signees in Jersey Wolfenbarger (Arkansas) and Tracey Berkshires (Oklahoma State).

“We’re still a young ballclub,” Northside coach Rickey Smith said. “We had two or three freshmen out there and a junior that’s never played.

“We’ve just got to continue to play some good games and get some good minutes, but I thought late, the last two or three minutes, we settled down, we executed and we got the ball to go in.”

Northside started the game on an 8-2 run and built an 18-5 lead at the end of the first quarter. The Lady Bears then extended that advantage to 14 in the second quarter before El Reno ended the first half on a 15-2 run to cut Northside’s lead to one point at the break, 28-27.

El Reno senior guard Tetona Woods-Blackowl then opened the second half with a 3-pointer to put the Lady Indians ahead by two.

But Northside senior Haitiana Releford, the lone returning starter from last season’s team, answered on the other end. She was able to bank in a short jumper off the glass for a five-point Lady Bear lead.

Northside then forced a turnover, with senior Ashya Harris coming up with the loose ball. Freshman Erianna Gooden eventually iced the win on a foul shot with 11 seconds left.

“We got off to a hot start and shot well, but then they switched defenses and we lost our momentum,” Smith said. “They shot the ball really, really well and we missed some shots.

“It’s totally different for Northside High School; we don’t have those seniors that’s been through those big, big wars other than Releford and Harris and the Warrs (sisters Khassidy and Khamille Warr), but it was a big win. That was a good team; they shoot the ball like that, they’ll beat a lot of folks.”

Two of those treys came in the final quarter, the latter a shot from the left wing with 2:10 left which gave Northside a 57-50 lead.

“I knew that was a critical shot I had to take, and I was just confident in making it, so I just shot it,” Washington said.

“Our team gave me good energy, so it boosted my confidence and that just made me feel confident in my shots.”

Washington finished the night with 13 points, going 4-of-5 from beyond the arc.

“Every player has to have that breakout game to get that confidence and to believe in themselves, and hopefully that’s the game for her (Thursday),” Smith said. “I thought she had some good rebounds on top of the four 3’s that she made, so she was a big difference maker for us.”

For the Lady Indians, Woods-Blackowl finished with 22 points. She was 7-of-14 from the field and 7-of-8 from the line.

The Lady Bears will advance to Friday’s semifinals, and will play at 7 p.m. against West Memphis, which beat Howe (Okla.).

West Memphis pulled away late in the end to win its opening-round Tournament of Champions game against Howe, which won Class 2A in Oklahoma a season ago.

The Lady Blue Devils built a 19-12 lead through one quarter, before Howe got within two at the half, 27-25. West Memphis was up 36-31 after three quarters before building a sizable lead early in the fourth.

Howe made one more push, getting within six. But West Memphis junior guard Janiyah Tucker made a driving layup and sophomore Aniya Price hit a 3-pointer seconds later to push the lead back into double digits.

Clemisha Prackett, a 6-foot-1 junior, led all scorers with 26 points and had a double-double with 17 rebounds. She made all six of her free-throw attempts well.

The Lady Bulldogs built a big first-quarter lead and never looked back as they rolled to an opening-round win Thursday.

Greenwood will advance to play Tuttle (Okla.) in Friday’s semifinal round, set for 8:30 p.m.

Thursday, Greenwood outscored Ada in the first quarter, 17-7, and then extended the lead to 15 at halftime, 31-16. The Lady Bulldogs then dominated the third quarter, outscoring Ada 21-7 to build a commanding 52-23 advantage.

Greenwood’s defense held Ada to six first-half field goals and four after halftime. Ada made only one 3-point attempt all night.