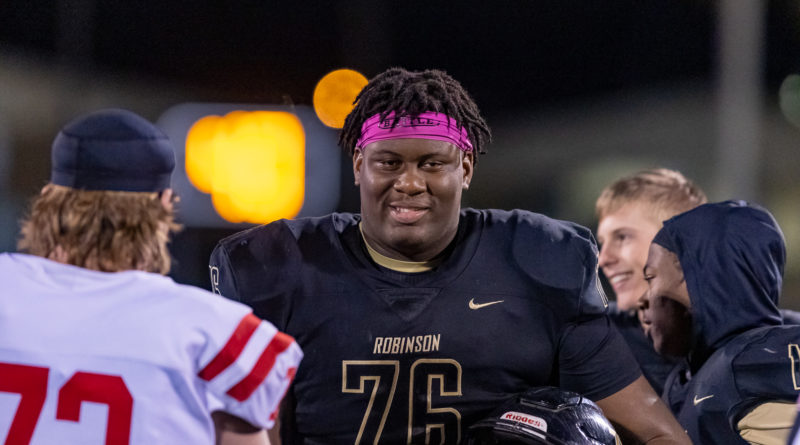 Brian Maupin won’t ever forget his first encounter with E’Marion Harris. Maupin was fresh out of Harding University and teaching elementary school physical education. Harris, an eight-year-old third-grader, was taller than the former linebacker Maupin, who was listed at 5-foot-10 (maybe a bit of a stretch) in his Bisons online bio.

“At first, I was a little ticked off because an elementary child was taller than me,” Maupin said with a laugh. “I had just finished playing college football, and I see this third-grade student who was bigger than me, and when we played basketball he posted me up and was quite successful.

“He was just so natural. He was the best kickball player. When we played football, he could catch and throw. What was scary is that he was so big, but he could move like the other kids.”

Two years later, Harris tagged along with Maupin and a handful of Joe T. Robinson varsity football players, including his brother Elliot Harris Jr., on a recruiting trip to the University of Arkansas.

“They were doing the heights and weights, and they look over at E’Marion and say, ‘What about that kid?’” Maupin said. “I said, ‘That’s Elliott’s little brother — he’s 10!’”

Seven years later, Harris is 6-foot-7, 380 pounds, starting on the offensive and defensive lines for Joe T. Robinson and is an Arkansas commit. Maupin’s feelings aren’t hurt anymore as he serves as the defensive coordinator on longtime Senators coach Todd Eskola’s staff. Together they will try to win the school’s second Class 4A state title in three years when they play a rematch of their 2019 win against Shiloh Christian on Saturday night at 6:30 at Little Rock’s War Memorial Stadium. This is Harris’ third state title game, and he’s been a part of 49 wins at Robinson.

“It means a lot to play in three state championship games,” Harris said. “I know a lot of payers don’t get to play in one. It just means a lot, and we are focused on trying to win another one.”

Harris, only 17, started his first game as a 13-year-old freshman at Class 7A Springdale. That began a string of 58 games started.

“That’s got to be close to a record,” Maupin said. “First, you have to start as a freshman and with him there has been some unique circumstances where he is playing in his third state championship game.”

Harris, whose father Elliott Harris Sr. lettered on the Arkansas defensive line from 2001-04, plays every snap on offense and defense, according to Maupin.

“He is extremely fluid for a heavy individual,” Maupin said. “He has great flexibility and mobility and can bend and squat in the weight room. That’s what separates him from being just a big kid.”

Harris has always had size, but when he made that first start as a 13-year-old, he was mild-mannered. That has changed over the years.

“He is a nice guy, but we have gotten him mean and meaner on the field,” Maupin said. “He was a big kid with good feet, but now he is a nasty lineman in the trenches and will finish you and put you on the ground.

“We told him that he needed to progress to where he was a serviceable lineman to by the end of his career dominating the children across from him. He has done a good job progressing. He has violent hands, runs well and is really good against the pass rush.”

Harris said it was the 28-0 loss to Arkadelphia in the 2018 Class 4A state championship game “that motivated him” to get more of an attitude in the trenches.

“I would say [the attitude] kicked in in 10th grade. I didn’t like losing the championship as a ninth-grader, and I knew I needed to go get it.”

His progression was never more evident than this fall in a 47-44 overtime win against Maumelle the second game of the season. Harris was matched with Hornets defensive lineman Nico Davillier, who is also committed to Arkansas. Davillier is by far the biggest and most-skilled lineman Harris saw as he stands 6-foot-4, 275 pounds. Davillier was ranked a four-star recruit by some services.

Harris received scholarship offers from many major programs, including Alabama and Georgia. He committed to Arkansas in May. Maupin said PIttman’s background as an offensive line coach weighed heavily in his decision.

And while the elder Harris is very supportive and attends as many games as he can while juggling his career as a truck driver, Maupin said he didn’t pressure his son to attend his alma mater.

“He is real proud of me and happy to watch me play,” Harris said. “He supports me even when he has to be on the road. He is real excited that I am going to Arkansas.”

With his college decision out of the way, Harris has focused on helping Robinson to another state championship. The Senators lost to Class 5A Pulaski Academy in the home opener and haven’t lost since. The playoff road included a showdown at storied power Warren last week in the semifinals, but the Senators rolled past the Lumberjacks 43-13.

The Saints offer the most physical test with a big, rugged offensive line that fuels a potent running game.

“We just have to go out and dominate [Shiloh Christian], and be physical,” he said. “We all have to do our jobs and not do anyone else’s job.”

The title game signals the end of not only Harris’ prep football career, but also his time at Robinson. He will enroll at Arkansas in January and will go through spring football and prepare for his freshman season.

“It’s really hard to believe — it’s gone by real fast, and it seems like it was the other day I was a freshman playing with my brother,” Harris said. “I try not to think about it; I am just focused on football and winning this state championship.”

No matter what happens Saturday night, Harris’ impact on the Pulaski County school won’t be soon forgotten. Especially by Maupin, who has seen him grow, literally, in front of his eyes.

“He may be the greatest Senator of all-time,” Maupin said.