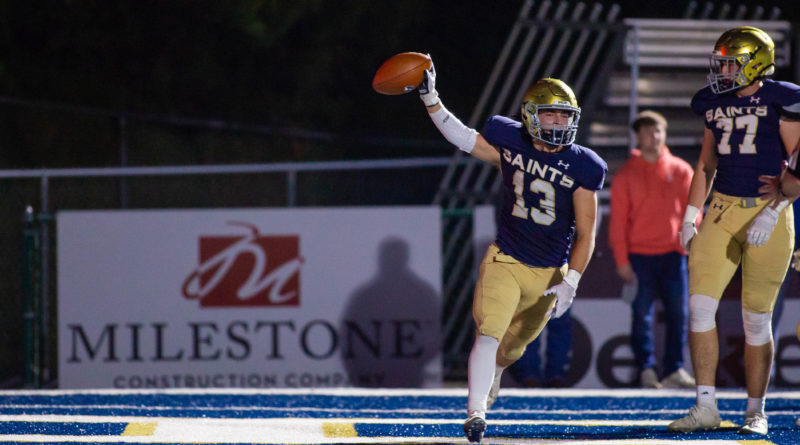 SPRINGDALE — Down by five with just over two minutes to play in Friday night’s Class 4A state semifinal clash at Champions Stadium, Shiloh Christian tailback Ben Baker knew the game rested on his shoulders.

The 5-foot-8, 160-pound senior took three straight handoffs from quarterback Eli Wisdon – the first going for 18 yards, then a 15-yard run, before reaching paydirt with a 21-yard cutback through the Arkadelphia defense with 1:47 to play, leading the Saints a 57-54 victory.

“We knew it was going to be tough coming into this one, but we had the confidence that we could get it done if we played like a team,” said Baker, who carried the ball 23 times on the night, for 206 yards and four touchdowns. “Toward the end, I knew we were losing, and Coach wanted me to get it in the end zone. So, I gave it everything I had.”

The victory sends the defending state champions back to Little Rock next week to vie for their ninth overall crown against Little Rock’s Joe T. Robinson – a 43-13 winner over Warren in the other semifinal.

“It feels great going back to the championship game again, but I am exhausted, because this game took a lot out of me tonight,” Saints coach Jeff Conaway said. “But we would have taken a one-point victory if that’s what it took to get us back to Little Rock.”

Both offenses hit full stride out of the gate. After Arkadelphia’s Braylon Bailey returned the opening kickoff 36 yards into Shiloh territory, quarterback Donovan Whitten orchestrated a 7-play, 49-yard drive, capped by a 16-yard touchdown toss to Alex Loy for the early 7-0 lead.

The fireworks continued through the first quarter. Whitten scrambled for a 9-yard TD jaunt, only to see Wisdom return the favor with a 27-yard run, tying the score 14-14 with 1:36 left in the opening stanza.

Shiloh (13-1) finally broke serve, forcing Arkadelphia into a short three-and-out drive. The big play was a ferocious tackle by freshman noseguard Hudson Ball, who collided with the 220-pound Davis for a 2-yard loss on third down, sending the Badgers’ leading rusher to the sideline with an injured ankle. Two plays later, Wisdom threw a 61-yard pass to Bo Williams, who raced down the Badger sideline to give the Saints their first lead, 28-21, with 7:47 to play in the first half.

“I just fought as hard as I could to get around those boys, and tried to do everything my coaches asked me to do,” said Ball, who was recently elevated to the varsity team. “It felt great be able to make some plays for my team.”

It was also a special game, because it was the first time he got to play with his brother, senior lineman Jackson Ball.

“Being able to play with my brother meant everything to me,” the younger Ball said.

It seemed like momentum had swung in Shiloh’s favor until Badger defensive back Latonnieo Hughes picked off a Saint pass and rambled back 35 yards for a touchdown, tying the score at 28-28.

Then, on the second play on the ensuing drive, Ollie Ware intercepted Wisdom again, returning it to the Saints’ 23.  Four plays later, Davis returned to score on a 14-yard run up the middle, giving Arkadelphia a 35-28 advantage at the intermission.

“Those two interceptions hurt us, because I felt we were about to break the game wide open,” Conaway said. “But Eli was just trying to make a play for us, and when you are as dynamic of a player as he is, sometimes that does happen. But he also made some great plays for us tonight, as well. And kudos to Arkadelphia for battling to stay in it until the end.”

“It was definitely a slugfest early, and stayed like that pretty much until the end,” Conaway added. “I think this was two great football teams, laying it all on the line to win a state championship.”

Wisdom engineered a 10-play drive to open the second half, including a perfect 5-for-5 through the air, including a 33-yard scoring strike to Jacob Solomon to even the score once again.

The Badgers regained the lead midway through the third period on a 6-yard keeper from Whitten. But Shiloh’s Luke Sluyter extended to block the extra-point kick, thus holding Arkadelphia to a 6-point lead, 41-35.

“Arkadelphia is a great team. They put up 54 on us, which isn’t acceptable for our defense,” said Saints defensive captain and Arkansas Razorbacks commit, Kaden Henley. “But we just have to go back out and fix some things and get ready for Robinson next week. We’ve been preaching love this whole week. We are going to go out and play for each other, not ourselves. Our goal tonight had nothing to do with personal stats. It was to go out and win a game, and fortunately we were able to do that.”

A 1-yard run by Baker, along with Caleb Anderson’s extra-point kick, put the Saints back in from 42-41 late in the third.

But Whitten refused to let his team down, as he kept churning out plays, through the air and on the ground. His 41-yard connection to Loy see-sawed the scoreboard back in the Badgers’ direction early in the fourth quarter. But on the following drive, Baker scored on another 1-yard run for the Saints to make it 49-48 with six minutes left.

The 6-foot-3 Whitten completed 24-of-41 passes for 304 yards and three touchdowns. He also ran for 77 yards and two more scores.

The strong-armed junior hit Tripp Campbell from 4 yards out, putting Arkadelphia back up 54-49 with 2:19 to play. But that just set the stage for Baker’s late-game heroics for the Saints. Wisdom outran the Badger defense to the corner of the end zone for the 2-point conversion and a three-point lead.

“They fought to the very end, and I think that is a testament to how we have played all year. I can’t say enough about these seniors we have. We have had a great season, although not the way we wanted to end it. It was a great football game, and I just loved the fight that our guys showed again tonight. Hats off the Shiloh. They are a great football team and called a great game over there. It was a dogfight, and that’s the way it should be in the semis.”