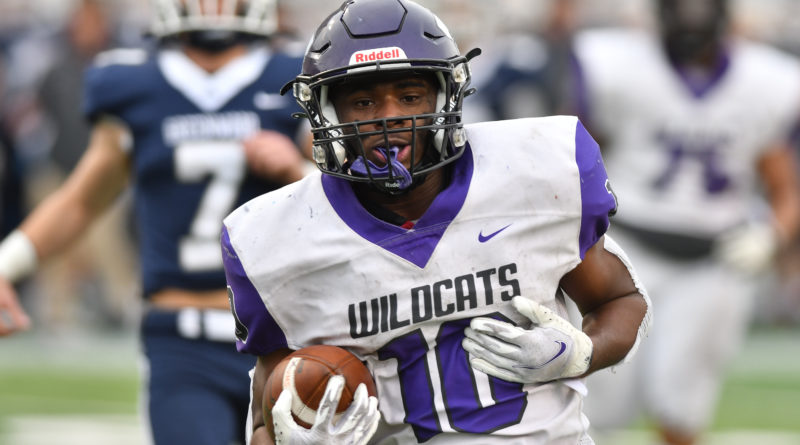 LITTLE ROCK — Shardarious Plummer was the star that stayed bright for the El Dorado Wildcats (11-2) in a 27-17 victory over Greenwood (9-4) on Saturday afternoon in front of 5,220 at War Memorial Stadium in the Class 6A state championship game.

The junior tailback rushed for 181 yards on 26 carries and scored all four of the Wildcats’ touchdowns.

“Shardarious has to be the best player in Arkansas,” said El Dorado Coach Steven Jones. “I know there were some coaches in Arkansas talking to him after the game. Greenwood played a light tackle box and we were able to take advantage of it.”

Plummer said, “I didn’t think I would have all four of our touchdowns. Football is a game where you’re going to have mistakes and adversity and we were able to open things up.”

Greenwood, which was hoping to defend its state title, had a “rough day” said Coach Chris young.

The Bulldogs turned the ball over five times. [Both teams combined for nine turnovers, which was a new record in a state championship game. The old mark was 8 set back in 1986 by Wynne and Rivercrest and in 1983 by Augusta and Prescott.] They suffered eight sacks which led to minus-44 yards rushing and starting quarterback Hunter Houston was knocked out before halftime with an injury leaving sophomore Slade Dean to finish the game.

“We ran up against a great defense and many times they brought one more than we can block,” Young said. “We made a bunch of mistakes which was uncharacteristic and they out executed us. Their defense was the difference.”

Houston completed 10-of-20 passes for 106 yards with 1 touchdown and 1 interception and was sacked 5 times. LJ Robins led the Bulldogs with 9 receptions for 117 yards and 1 touchdown.

Marques Waller and Patrick Sixbey led the Wildcats with six tackles. Damarian Rester and 4 tackles including 2 sacks and 3 tackles for loses. Seven players had a sack for the Wildcats.

“Our defense was fired up,” said Jones. “They heard all the press this week about Greenwood’s offense, and they really got after it and we had some guys getting to the ball.”

Braden Skaggs led the Bulldogs with three interceptions. Evan Williams had 15 tackles while Sebastian Crumb had 12 and Landon Nelms had 10.

Leading 13-10 at halftime, El Dorado’s defense made the first big play of the second half. With Greenwood having the ball on the El Dorado 25, Dean threw a pass down the middle to Robins, who was stripped of the ball by El Dorado’s Rakel Williams with Jyrin Steward recovering in the end zone for a touchback.

After both teams exchanged punts, El Dorado got some breathing room when El Dorado quarterback Sharmon Rester, who struggled on a 11-for-25 passing day for 109 yards and 3 interceptions, had completions of nine yards to Deandra Burns and 17 yards to Kamron Bibby and had a pass deflected back to him which he ran for nine yards to the one which set up Plummer’s third touchdown of the day. Plummer’s score and Rojemi Aydogdu’s extra point with 5:53 put the Wildcats up 20-10.

After Skaggs made a diving interception with 11:53 left in the game, the Bulldogs mounted their only scoring drive of the second half. Dean, who completed 8-of-15 passes for 161 yards, had completions of 11 yards to Aiden Kennon, seven yards to Luke Brewer and 29 yards to Grant Karnes on fourth and 20 which set up his 2-yard touchdown with 9:25 left. Ben Moy’s kick closed it to 20-17.

“Slade battled out there and made some big plays for us,” said Young.

The Wildcats then put the game away with an 11-play, 66-yard drive in which Plummer handled the ball seven times, including a 35-yard touchdown run with 2:36 left in which he started right and cut back to the middle. Aydogdu’s extra point set the final margin.

The Wildcats’ first touchdown came off a turnover. On Greenwood’s third play of the game, Houston fumbled when he was hit by Sixbey. Danquez Shelton picked up the ball and ran it back 10 yards to the 20. One play later, Plummer ran around the left side for a 20-yard touchdown. Aydogdu added the extra point and the Wildcats led 7-0 at the 8:10 mark.

After a Greenwood fumble and El Dorado punt, the Bulldogs tied the game at 7-7 on a 47-yard screen pass from Houston to Robins. Moy’s kick was good at the 4:37 mark.

Three plays later, Sharmon Rester was intercepted by Skaggs who returned the ball 9 yards to the El Dorado 41. Seven plays later, Moy added a 31-yard field goal to put the Bulldogs up 10-7 at the 2:16 mark.

After Skaggs had his second interception of the game, El Dorado’s Joshua Hill intercepted a pass tipped by Steward at the Greenwood 16. Two plays later, Plummer scored from 2 yards out at the 10:40 mark. Aydogdu’s kick was blocked by Levi Russell, leaving the score at 13-10.

After a Greenwood punt, El Dorado drove from its 49 to the Greenwood 7 in nine plays on a drive in which the Wildcats were penalized three times with the last one proving costly. A delay-of-game penalty pushed the Wildcats back to the Bulldogs’ 7 and Sharmon Rester’s pass to Burns was incomplete at the 5:07 mark.

With 1:24 left in the half and the Bulldogs facing third-and 27-from its 11 thanks to a sack and two penalties, Houston was hit while throwing to Robins and forced to leave the game. One play later,  El Dorado’s Torenzo Dunn muffed the punt return and Greenwood took over on its 28.

Three plays later, the ball was snapped to Dean, who was looking at the sideline in shotgun formation, Greenwood recovered and punted away to end the half.

“The first half, we tried to do too much,” said Jones. “We made a lot of mistakes and harped on that and started to keep things simple after halftime.

“This is an awesome feeling to have El Dorado back on top. You can’t find a more deserving community that treats our players like stars.”