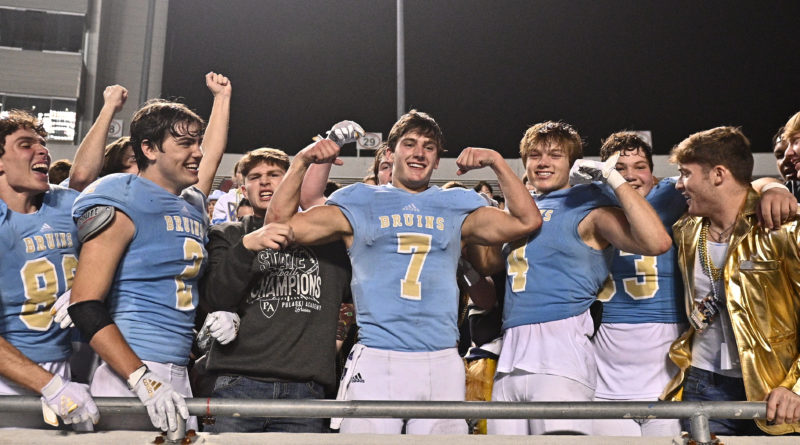 LITTLE ROCK — Any positive momentum the White Hall Bulldogs needed in beating Pulaski Academy in the Class 5A state championship game vanished in the first quarter of a 51-19 defeat Friday night in front of 4,411 at War Memorial Stadium.

With 5:19 left in the first quarter and Pulaski Academy facing fourth-and-three from its 27 while holding an 8-7 lead, and the Bruins went for it. Joe Himon, who rushed for 151 yards and 2 touchdowns, took the handoff and was stuffed at the line of scrimmage.

Fifteen plays later, the Bruins took advantage when Vaughn Seelicke nailed a 31-yard field goal at the 1:20 mark to extend the Bruins lead to 11-7.

On the following kickoff, Tyson McCarroll recovered an onside kick that bounced off a White Hall player.

Four plays later, the Bruins made the Bulldogs pay when state championship MVP Charlie Fiser, who completed 17-of-36 passes for 386 yards and 3 touchdowns while rushing for 67 yards and 2 touchdowns, found Charlie Barker down the middle on a 33-yard touchdown pass at the 11:52 mark of the second quarter. Fiser’s pass on the two-point conversion was no good and the Bruins led 17-7.

“That play was big,” said White Hall Coach Bobby Bolding. “We held them to a field goal and then they got the onside kick and scored. They executed it. That’s what they do.

“That play hurt. We also had a shotgun snap that sailed over our heads and those things don’t happen to us. They had a great game plan and they whipped us.”

With momentum on their side, the Bruins did not let up.

After a White Hall punt, the Bruins used two big plays to set up their next touchdown. Fiser threw 24 yards to Barker and Kenny Jordan ran 28 yards to the five which set up Fiser’s 5-yard keeper up the middle at the 6:39 mark.

The extra point was no good and the Bruins led 23-7.

The Bruins needed three plays to go 67 yards for its last touchdown of the first half. Two plays after a 43-yard pass from Fiser to John Mark Charette, Fiser threw 24 yards to Jaylin McKinney with 44 seconds left. Seelicke’s kick was good and the Bruins led 30-7.

“The big thing was we didn’t let up tonight,” said first-year Pulaski Academy Coach Anthony Lucas. “That is the one thing we talked about tonight.”

“Coach (Adam) Thrash wanted to start working on White Hall after the last meeting, but I told him we had to get ready for Maumelle,” said Lucas. “The thing he stressed was we’re probably going to see White Hall again, and we were ready.”

White Hall opened the second half with Martinez, who completed 15-of-24 passes for 202 yards and 3 touchdowns, throwing a 25-yard touchdown pass to Steven Weston at the 11:01 mark of the third quarter. Martinez’s pass for the two-point conversion was incomplete, leaving the score at 30-13.

Thanks to a 49-yard pass from Fiser to Barker, the Bruins scored four plays later on a 1-yard run by Himon at the 8:39 mark of the quarter. Seelicke’s kick made it 37-13.

After Martinez threw 12 yards to Weston with 36 seconds left in the third quarter to close it to 37-19, Fiser completed a quick hitch to McKinney, who made a move on a White Hall defender and went 80 yards down the left sideline for a touchdown. Seelicke’s kick made it 44-19.

The Bruins added a 19-yard touchdown run by Himon with 46 seconds left to close out the scoring.

“I’m so happy and so grateful for the 15 seniors,” said Lucas. “When we started last January the goal was to win a state championship  and when Coach (Kevin) Kelley left in May, I thought the job would go to two other guys, but God had another plan when I got the job.”

The Bruins took an 8-0 lead at the 10:15 mark of the first quarter when Fiser capped off a six-play, 80-yard drive in which every play was a run by scoring from a yard out. He threw to Barker for the conversion to make it 8-0.

White Hall answered on a 18-yard screen pass from Martinez to Tekaylin Walker. Kyler Barnes’ kick was good and the Bruins led 8-7.

“I was proud of the way we executed on third and fourth downs,” said Lucas. “When we get to third down, we don’t get nervous.”

Zaire Green led the Bulldogs in rushing with 92 yards on 15 carries. Jordan Jackson caught 5 passes for 72 yards and Weston caught 4 for 61 yards and 2 touchdowns.

“There were a lot of nerves and emotions this afternoon,” said Lucas. “I was going around making the sure the balls were pumped up and couldn’t stop moving. When you’re a head coach there is added pressure on you because you don’t want to let the players down, but I made sure the players didn’t know how nervous I felt.”