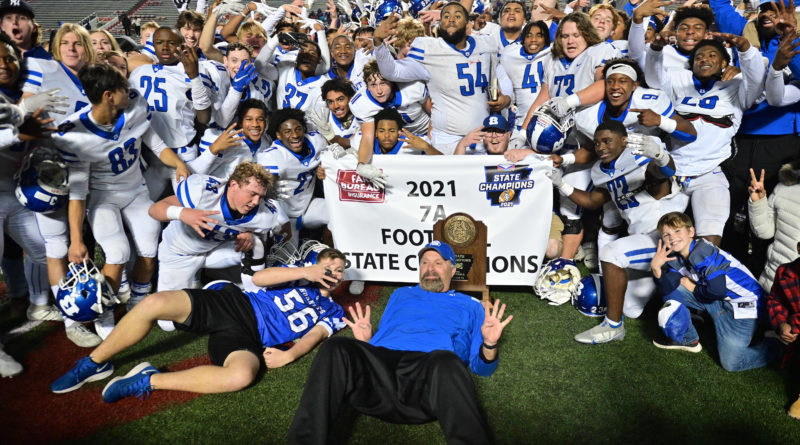 “That’s why they put 48 minutes on the clock for a reason,” said Bryant coach Buck James. “We played all the way to the end and that is a way of life of doing things as a Bryant Hornet.

“I really don’t know what to say. Four in a row is unbelievable. We didn’t play well for a while, but Fayetteville had a lot to do with that. This game could have gone either way, but our kids found a way to win.”

Carson Burnett completed a 36-yard pass to Mytorian Singleton, who had 6 catches for 115 yards, with 1:53 left to put the Hornets ahead for good after Stephen Fuller made the extra point. The touchdown capped off a 6-play, 80-yard drive in which they converted a fourth-and-three with Burnett throwing 27 yards to Singleton to move the ball to the Fayetteville 41. Singleton caught the ball over the middle, bounced off a couple tacklers and got down the left sideline.

“Carson’s a winner,” James said of his quarterback, who completed 12-of-20 passes for 197 yards with 1 touchdown and 2 interceptions. “Coach (Kirk) Bock has done a great job working with him. He’s like a fullback, linebacker playing quarterback.”

The Hornets defense helped seal the victory three plays later when Ivory Gilmore hit Fayetteville quarterback Bladen Fike and Will Diggins, who is a regular starter on the offensive line and was playing both ways, recovered the ball with 1:15 left.

After running three plays to run the clock down 17 seconds, Burnett punted the ball away. Fike, who completed 21-of-46 passes for 473 yards with 4 touchdowns and 3 interceptions, completed a pass for 28 yards to Hayes Robinson and then tossed a Hail Mary to the end zone which was batted away at the goal line as time expired to secure the victory.

Fayetteville took its only lead of the game with 4:07 left when Fike scored from two yards out and threw to Isaiah Sategna for the two-point conversion. The score came after completions of 22 yards to Christian Setzer and 41 yards to Jaison DeLamar got the ball down to the 2-yard line.

“Bladen had a slow start tonight, but settled in,” Fayetteville coach Casey Dick said. “I know this was new to a lot of our kids and Bryant has been here four years in a row and used to this stage.

“I think our kids played hard, but came up short. Hats off to Bryant. I couldn’t be more proud of our kids in the effort they showed tonight.”

The game featured momentum swings with seven turnovers. [Bryant and 2 and Fayetteville had 5.] Bryant scored touchdowns off an interception and a blocked field goal. The Hornets defense had five sacks with Jaylon Brown collecting two.

“Momentum swings happen in big games like this,” Dick said.

The Hornets took a 7-0 lead at the 4:41 mark of the first quarter when Chris Gannaway, who rushed for 197 yards on 20 carries, scored from 16 yards out and Fuller added the extra point.

One play later, with Drake Fowler standing in the middle of the field, he intercepted Fike and ran it back 27 yards to the left side of the field 12 seconds later. Fuller added the extra point to make it 14-0.

Three plays after a Fayetteville punt, Jayson Johnson pressured Burnett and Brooks Yurachek intercepted the pass at the Hornets 47 at the 1:53 mark of the first quarter.

One play later, Fike found Sategna, who had eight passes for 168 yards down the left side of the field for a 47-yard touchdown pass. A bad snap on the extra point prevented Nathan Katchel from attempting the kick and the Hornets maintained a 7-6 lead.

After a Bryant punt, Fayetteville kept the ball for eight plays before Fike, who was under pressure, was intercepted by Jonah Brewster in the right corner of the end zone at the 8:49 mark of the second quarter

After a Bryant punt, Fayetteville closed to 14-13 when Fike found Jalen Blackburn, who had 5 catches for 124 yards and 2 touchdowns, down the right side for a 23-yard touchdown pass. Katchel’s kick was good, keeping the Hornets up 14-13.

Four plays later, Kaiden Turner intercepted Burnett, who returned the ball 21 yards to the Bryant 37. After consecutive sacks by Gilmore and Brown, Fike threw 12 yards to Sategna and 20 yards to Blackburn, getting the ball to the Bryant 19. Three plays later, Fike was intercepted by Malachi Graham, who was named MVP of the championship game with 55 seconds left in the half,

Graham made another big play at the start of the third quarter when he forced a fumble from Fike near the goal line and Fowler returned it eight yards to the Bryant 9.

The Hornets took advantage as Gannaway ran 84 yards to the Fayetteville 7 on the next play. After a false-start penalty, James Martin, who rushed for 63 yards on 15 carries, scored from 12 yards out at the 10:44 mark. Fuller’s kick was good and Bryant led 21-13

After Katcher kicked a 22-yard field goal to close it to 21-16 at the 8:18 mark of the third quarter, Graham made another big play.

With the Bulldogs lining up for 27-yard field goal, Traylon Russ came up the middle and blocked the kick, Graham scooped the ball at the 32 and ran it back 68 yards for a touchdown at the 4:07 mark. Fuller’s kick was good and the Hornets were up 28-16.

“Malachi has done it all year long,” James said. “He’s a talented player who’s done a heck of a job for us. My hat’s off to him and his brother Miguel. They have practiced hard and worked hard all year.

Fayetteville responded when Fike completed a 32-yard pass to Lach McKinney who ran a crossing pattern at the 1:59 mark. Katchel’s kick was good and Bryant’s lead was cut to 28-23.

After both teams exchanged punts with Graham’s 60-yard boot putting Fayetteville at the 1, Martin scored from five yards out with 9:35 left in the game. Fuller’s kick was good and the Hornets were up 35-23.

One play later, Fike found Blackburn running over the middle for a 72-yard completion with 9:20 left in the game. Katchel’s kick was good and the Hornets lead was cut to 35-30.

Fayetteville’s last scoring drive was set up when Burnett threw incomplete to Singleton on fourth-and-seven from the Bulldogs’ 34 at the 7:45 mark.

“Four in a row,” James said. “Not many people have a chance to do that. When I first came here, we hadn’t been to the semifinals. I am blessed because I have great coaches and great players and have a lot of kids who are resilient and come in at 5 a.m. and lift weights. They work extremely hard and pay a big price.”