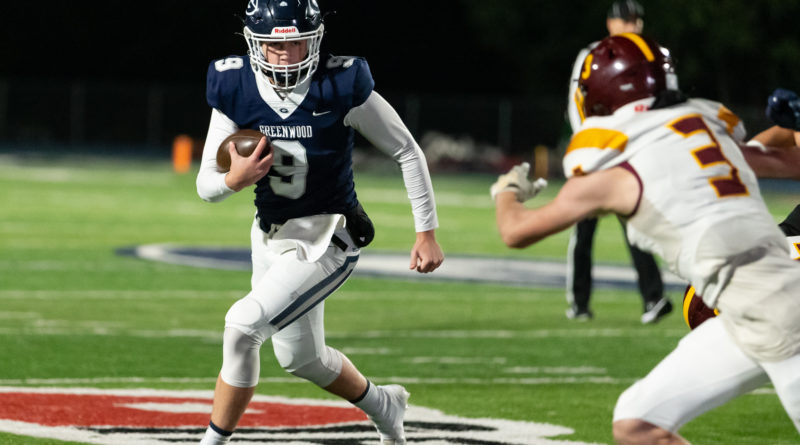 El Dorado coach Steven Jones said this week he’s seen a different intensity from his team in practice as they prepare to play Arkansas prep power Greenwood for the Class 6A state championship Saturday at noon at Little Rock’s War Memorial Stadium.

“Yesterday at practice, the horn blew for Period 5, and that is when we punt on Mondays, and about 10 seconds later, they were set up and ready to snap,” Jones said. “Usually, it takes a little bit of time to get there. They’re locked in and focused. You can see with how they are carrying themselves and practicing, they are ready to go.”

Greenwood has been one of the most successful teams in Arkansas high school football in the modern era. The Bulldogs have won 10 state titles since 2000. The program’s mystique is well-documented and continued to flow after former legendary coach Rick Jones left to take an analyst job at the University of Missouri two years ago. Longtime coach Chris Young took the helm last season and guided Greenwood to an undefeated state championship.

However, none of that really matters to Jones’ focused Wildcats.

“It’s hard to keep a secret from your team in 2021 with social media and all of the stuff that is put out there,” Jones said. “You do put it out there, about [Greenwood’s tradition], but it’s more about us. I could walk in a team meeting and talk about the tradition of our opponent, and they aren’t going to care who is coming in. This time of the year, it is bring in whoever wants to play and put the ball down and go.”

Jones calls El Dorado a “football town” in its own right and is proud of its tradition that includes 10 state titles since 1924, but the program also enjoyed a run of recent success under former coach Scott Reed, who is now at Cabot. Reed’s teams won Class 6A titles in 2009, ’10, ’11 and ’13.

The expectations were high for Greenwood (9-3) being the defending state champion, but maybe not as much for El Dorado under Jones, who came to the school  three years ago after wining a Class 2A state championship at Junction City. The Wildcats (10-2) were only 5-5 last fall.

However, two key offensive ingredients emerged over the summer. Senior quarterback Sharmon Rester took over the offense after serving as a backup last fall. He has burst on the scene with 3,428 yards passing with 41 TDs and just five interceptions. He also has run for more than 1,000 yards and added 10 rushing scores. Classmate Jackie Washington leads the Wildcats in receiving with 1,140 yards on 52 catches. Senior Kamron Bibby has totaled 991 yards, and junior DeAndra Burns Jr. has chipped in 827 yards.

“We knew [Sharmon Rester] was going to have a breakout year,” Jones said. “You could just see him develop. We knew this summer, that he had improved so much from last season, and he was primed up for that. There’s no question we had some speed and talent at receiver. The question mark was the offensive line. That group has been awesome this year. Our offensive line coach has done a good job with them, and the offensive line has been a big part of the explosive plays.”

Junior running back Shadarious Plummer was a reserve defensive back last fall but made the switch to offense in the summer and has flourished. He’s totaled 1,109 yards in 2021.

“I don’t know if that was bad coaching or what,” Jones said, chuckling, referring to Plummer playing defensive back last year. “It’s been a good move for him.”

Greenwood has faced Parkview twice this season. The Patriots boast eight players with Division I offers, including running back James Jointer, who has committed to Arkansas, and quarterback Jaylon White, an Ole Miss commit. Young said El Dorado might be even more explosive.

“They have great speed all around,” Young said. “Their wide receivers and running backs are as fast as you will find. And the quarterback, not only is he great throwing it, but he is as fast of a quarterback as I have seen in a long time. Just overall team speed. They are overall prepared. They are really good at what they do. I don’t think they are going to try to trick anybody. They are just going to execute, and they have been doing a great job of that the past few weeks.”

The turning point for El Dorado might have been a disappointing loss in the 6A-East Conference opener when they led Jonesboro by two scores and possessed the ball in the fourth quarter before giving the ball back to Jonesboro following a costly penalty and watching the Hurricane rally in front of their home fans. The Wildcats, who narrowly lost to Reed and Cabot in the nonconference season, haven’t lost since.

“From that point on, you could see the kids’ focus and they knew if we could play mistake-free football on offense and get some stops defensively, nobody could beat us,” Jones said. “We really feel like the Jonesboro game — were were the ones who lost that. Jonesboro is a great team, don’t get me wrong, but we felt it was some self-inflicted things we needed to fix.”

Greenwood also had a turning point in its season in its league opener. A banged-up Bulldogs team was blown out by Parkview at War Memorial Stadium. However, as the season moved forward, the Bulldogs started welcoming players back, including junior quarterback Hunter Houston, who battled a knee injury. The Bulldogs did have a one-point setback at conference champion Benton, but the big key to the postseason run was being in a position to draw the No. 2 seed heading to the final regular-season game against Lake Hamilton. The Bulldogs skunked the Wolves 35-0 on Senior Night to secure the No. 2 seed.

After smoking league foe Mountain Home in the Class 6A quarterfinals, Greenwood totaled more than 500 yards of offense in a rematch with Parkview at home last Friday in a 35-25 win, in which they trailed 21-7 in the opening quarter.

Greenwood has been forced to play sophomores and even a freshman because of injuries. Sophomores start on the offensive line and in the secondary due to season-ending injuries to seniors. Senior running back Jake Glover broke his leg earlier in the season and junior Javion Williamson filled in admirably, but he broke his leg against Parkview a week ago.

“We are not going to make excuses, we are going to use the next guy,” the coach said. “Greenwood kids are ready to play, and they understand it is ‘The next man up,’ and we have to prepare everybody to play.”

However, Young does have a healthy Houston, who can run, to rely on. Houston has run for nearly 400 yards, and he is near 3,000 yards passing with 26 touchdowns. He torched Parkview for 368 yards passing and four touchdowns last week.  He also ran for 95 yards and a score.

“Hunter had a great game running the ball Friday night,” Young said. “Obviously, you don’t want to do that by design, but we were kind of forced to. But we feel like we have good skill players. Aiden Kennon is as underrated of a player as there is. Luke Brewer is a one-on-one matchup nightmare. If Hunter just distributes the ball, that will take some of that pressure off of him.”

Kennon and Brewer could be key Saturday night. Kennon has totaled 988 yards and 9 TDs on the season. He had 163 yards receiving and 3 TDs last week. Brewer has 850 receiving yards with 8 touchdowns.

“I think what stands out is they are the Greenwood Bulldogs,” Jones said. “They do not make mistakes. It is the same thing we have seen from that program the past 15 or 20 years. Coach Young has his team ready to play each week. They do a really good job of being sharp offensively. They don’t have an explosive guy. They have guys that make plays, but they don’t make mistakes, and that is how Greenwood plays and why they are in the position they are, year in and year out, playing for state championships. They have bought into what they do, play selflessly and have an awesome coaching staff that comes up with an awesome game plan, and just the culture there. The ‘G’ on the helmet. It is something you look at and respect.”

Jones’ team will get that kind of respect if they beat Greenwood on Saturday.