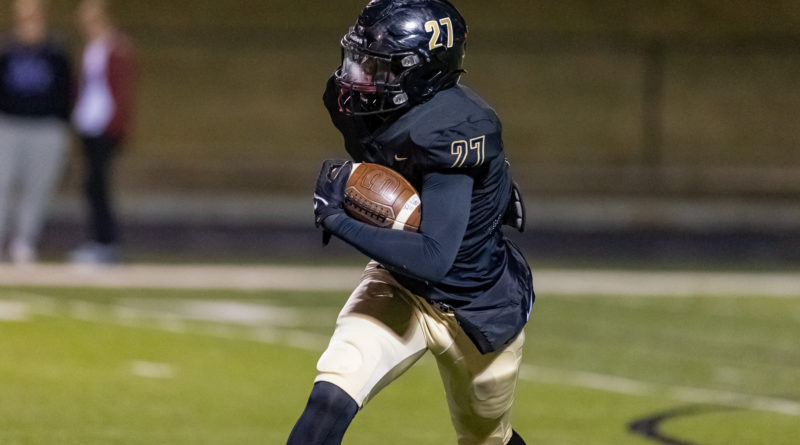 After Joe T. Robinson slammed Lamar 49-14 in the Class 4A state playoff quarterfinals Friday night, there was no celebration. The postgame included a quick team prayer and players filed into the locker room.

“This is the sixth year in a row we have played on Thanksgiving, so the kids are used to this,” Robinson coach Todd Eskola said. “They didn’t go crazy and celebrate tonight, it is just another test that we passed and next week we will get on the road to Warren to try to get another win and play another week.”

Robinson received the ball to open the game beginning at midfield after recovering an onside kick. It only took three plays to find the end zone credit to a 32-yard scamper from Daryl Searcy making it 7-0 just 20 seconds into the game.

Alex Gabriel’s ensuing kickoff was bobbled and downed by Lamar at its own 18, but Damien Hendrix pounded for rushes of five and four yards followed by a 22-yard scamper from Tony Balmer.

This set the tone for the drive as the Warriors grounded and pounded completing a 15-play drive resulting in a touchdown. Zack Wofford blocked the extra point from Jimmy Balmer to help Robinson keep its lead 7-6.

The Senators took advantage of another recovered onside kick at midfield going eight plays for 51 yards capped by Noah Freeman from a yard out to make it 14-6 with just over a minute left in the first quarter.

Lamar continued to play keep away and Robinson looked to have stopped the Warriors on a fourth-and-10 attempt, but a pass interference penalty gave Lamar a fresh set of downs at the Senator 25. Lamar continued to hold on to the ball possessing it for 16 plays finishing with a 12-yard QB keeper by Landon Harrison.

The two-point conversion tied it up at 14 with 4:44 before the half, but it took only one play for Robinson to respond thanks to a six-yard scamper by Searcy to extend the lead 21-14.

Eskola knew his team was prepared to go up against a slower-paced rushing attack like it faced in the Warriors, and he was not surprised they ran it effectively.

“Lamar has one of those offenses that you can’t simulate in practice,” Eskola said. “We’re a spread team, we play spread teams in our conference, so we don’t see a whole lot of what they do, and they do it really well. Lamar has very hard-nosed kids and they execute.”

In need of a stop to keep up momentum, the Senator defense stepped up big on the next drive forcing a three-and-out and then downed the punt at the Robinson 38.

The Senators got one more score, powered by 40 yards from Searcy on two plays, finished by Freeman from eight yards to take a 28-14 halftime lead.

The Warriors began the second half with a three-and-out but gained some confidence holding the Senators on a fourth down attempt to get the ball back around midfield.

They faced a fourth-and-six from their own 43 and attempted a throw that the Lamar coaching staff believed resulted in a pass interference, but a flag was not thrown.

Multiple flags ensued, mainly due to unsportsmanlike conduct against the Warriors, that moved the ball all the way to the Lamar 18 after all was said and done.

Freeman did the rest, taking the handoff from Cleveland then scoring on the first play of the drive for his third touchdown of the night to put Robinson up 35-14.

A targeting penalty on Robinson gave Lamar some assistance on the next possession putting the ball on the Robinson 31, but a series of short runs ending with Damien Hendrix being a yard short gave the ball back to the Senators on their own 22.

Searcy got involved in the action again scoring on the seventh play from 15 yards, this time through the air on a connection from Cleveland.

Though down 42-14 at the beginning of the final quarter Lamar refused to quit fighting and put together a successful drive starting on its own 28, but Chase Nichols ended all hopes intercepting Lamar back-up quarterback Skylar Smith’s pass at the Senator one.

Eskola mentioned that finishing was key to Robinson being able to pull away and keep Lamar from scoring past the first half.

“We felt we did a couple of things, the fumble on one drive and a pass interference on the other, that we were not able to finish,” he said. “It was just about us doing that and making some slight adjustments with our eyes.”

Starting with their backs against the wall for one final drive did not faze the Senators as Cleveland led his offense down the field and an eight-yard touchdown from Searcy.

Searcy rushed 9 times for 165 yards (18 YPC) with three scores while also adding an additional touchdown through the air.