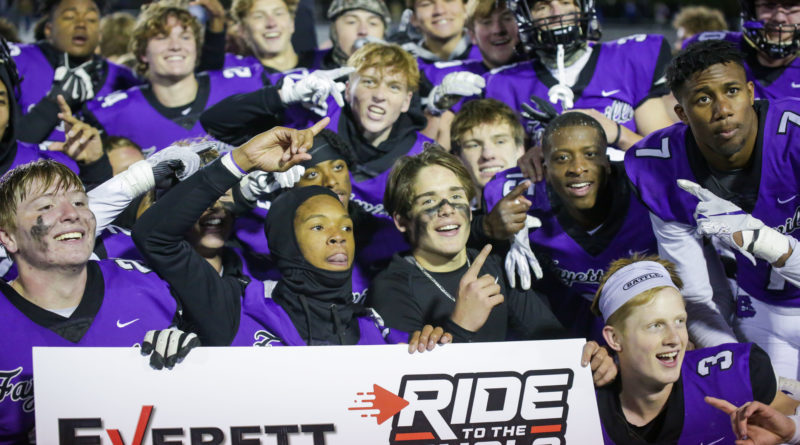 FAYETTEVILLE — Down 21-20 to Conway with 8 seconds remaining on the clock Friday night, Fayetteville coach Casey Dick walked over to his kicker and simply asked, “Are you ready?” Without missing a beat, Graham Witte assured him, “Yeah, I’m ready.”

The junior then trotted onto Harmon Field and booted a line-drive, 40-yard field goal to give Fayetteville a 23-21 lead with 4 seconds remaining.

The Wampus Cats ran one last-gasp play before time expired, only to have Bulldogs linebacker Kaiden Turner intercept a pitch and return it to the end zone as the final second ticked away.

The 29-21 victory propels Fayetteville to the Class 7A state championship game against Bryant, a 28-13 winner over North Little Rock in the other semifinal matchup. The Bulldogs and Hornets will go to battle next Saturday at 6:30 p.m. in Little Rock’s War Memorial Stadium.

“Just an unbelievable fight in our kids,” Dick said. “They didn’t give in, and they just stayed the course. That’s why I just love this group.”

It was the second straight week that the Bulldogs had to come from behind in the fourth quarter, rallying to defeat Cabot last week, 34-27.

“It’s just the kids, more than anything,” Dick said. “They just keep believing that they can win. I don’t know how many game-changing plays there were, but it seemed like just one after another tonight.”

Fayetteville actually scored the first 20 points of the game, only to see the Wampus Cats rally with 21 unanswered.

After forcing Conway to punt on the game’s opening possession, the Bulldogs gave it right back three plays later. Wampus Cat Safety Traland McClure picked off a Bladen  Fike pass and returned it to the Fayetteville 8.

But the Bulldog defense dug in and forced a missed 25-yard field goal attempt.

Fike quickly bounced back on the Bulldogs’ second possession, beginning the drive with a 63-yard strike to Jalen Blackburn. Two plays later, he hooked up with Blackburn again, this time for a 17-yard touchdown to put Fayetteville up 7-0 midway through the first quarter.

Fike completed his next six pass attempts, including a 3-yard strike in the corner of the end zone to senior Isaiah Sategna, putting Fayetteville on top 13-0 with 4:08 remaining in the first quarter. Sategna, the state’s top prep recruit, who is committed to play for Arkansas, made a spectacular grab on the play. He went up high with a defender in his face, reaching around the defender to make the grab – pinning it to his opponent’s helmet as he hit the ground.

“I know a lot of people think that I’m just about speed, but I really worked this past offseason on my craft as a receiver, working on the little things,” said Sategna, who caught 8 passes in the game for 136 yards. “Now, I feel like I am a more-polished pass-catcher and can go up for those 50-50 balls and come down with them.”

Conway took the ensuing kickoff and marched down to the Bulldog 8, before turning the ball over on downs. Fayetteville came right back with a methodical 18-play drive, scoring on a 1-yard plunge by Turner, who scored on both sides of the ball.

“The guys that don’t get the credit they deserve is our O-line,” Sategna said. “They played a heck of a game, opening holes and protecting Bladen and giving him the time that he needed to deliver the ball. I think I would give the game ball to them tonight.”

Conway tailback Boogie Carr then got revved up and started breaking runs through the Fayetteville defense – rambling for 36, then 26 yards. But it was Jayllen Chambers who got the Wampus Cats on the board with a 2-yard scamper to cut the lead to 20-7 with 5:15 left in the half.

The Fayetteville defense then stiffened up and forced Conway to turn the ball over on downs once again — this time at the Bulldog 21 – to preserve the halftime lead.

“Our defense played their best game of the whole year against a really good offense tonight,” Sategna said. “Our offense was clicking in the first half, not quite as much in the second half. But we were able to close it in the fourth quarter.”

Conway blocked a Fayetteville field goal midway through the third period, which seemed to shift the momentum in favor of the Wampus Cats. Sophomore quarterback Donovyn Omolo engineered a 13-play drive, with help from a pair of pass interference penalties, to cut the lead to 20-14 on a 3-yard keeper with 1:27 to go in the third.

Omolo then completed all four of his passes on the following drive, including a 12-yard strike to senior Manny Smith to give Conway its first lead of the game, 21-20 with 9:53 to play. Omolo completed 19 of his 36 passes in the game for 192 yards.

An interception from Braelon Palmer gave Fayetteville an opportunity to score later in the fourth, only to turn the ball over on downs at the Wampus Cat 19.

After Conway nearly put the game away with a drive to the Fayetteville 14 with under two minutes to play, Palmer came up big again, with another pick in the end zone.

Fike took control and swiftly moved the Bulldogs down the field, with a key 33-yard completion to Dylan Kittell, to set up the late field goal.

“I think we have the four best receivers in the state, so it’s awesome to be able to throw to those guys,” Fike said. “And my offensive line just does a great job of giving me time to make the throws.”