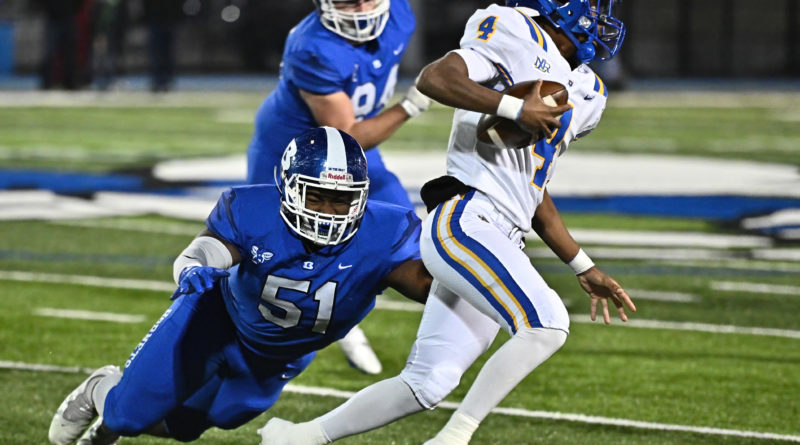 BRYANT — Bryant’s defense came up with the timely plays in a 28-13 victory over North Little Rock in the Class 7A semifinals Friday night.

On a night in which the Hornets punted seven times, turned the ball over twice on downs in North Little Rock territory and were held to 282 total yards, the Hornets defense stood tall and earned a fourth consecutive trip to the state championship game where it will meet Fayetteville, a 29-21 winner over Conway, on Saturday night at War Memorial Stadium in Little Rock.

Bryant (11-1) held North Little Rock to 235 yards (153 rushing and 82 passing), collected three sacks from senior end Brandon Jones, had two interceptions, including a 20-yard return for a touchdown by junior cornerback Miguel Graham which sealed the victory and had a goal-line stand early in the first quarter.

“We played good defense tonight, holding them to 13 points,” said Bryant coach Buck James. “We didn’t start that well in the first half. Offensively, we didn’t play that well, but North Little Rock had a lot to do with that.”

North Little Rock (10-3) ends its season with a loss to the Hornets for the second year in a row. A year ago, the Charging Wildcats lost the Hornets in the 7A state championship game.

“Our kids played hard and relentless,” said North Little Rock coach Randy Sandefur, who spent most of the night on crutches after getting run over in a collision on the North Little Rock sideline. “We have no excuses. Bryant played a heck of a game, and it’s a pleasure to play them because it’s going to be man-on-man with the last man standing.”

The Hornets, who punted on their first four possessions of the game, came alive on their last two drives of the first half.

Trailing 10-0 with 7:01 left in the first half, the Hornets got their first big play of the game when Chris Gannaway, who rushed for 109 yards on 11 carries, went around the left side for a 59-yard touchdown run. Stephen Fuller’s extra point brought the Hornets to 10-7.

North Little Rock came back with a 9-play drive, moving from its 16 to the Hornets’ 28 before Devin Jackson came on a 43-yard field goal attempt at the 3:09 mark. However, Jackson’s kick bounced off the left upright.

Then the Hornets’ passing game heated up Carson Burnett, who went 7-for-20 for 142 yards and misfired on his first four attempts, completed a 10-yard pass to Mytorian Singleton, a 44-yard pass to Blake Everett down the left side, a 5-yard pass over the middle to Singleton and an 10-yard touchdown pass to Everett in the  back of the end zone with 58 seconds left to put the Hornets up 14-10 after Fuller made the extra point.

Taking over at it 44 after a 12-yard kickoff return after a squib kick, North Little Rock moved to the Bryant 34 before Jackson’s 52-yard field-goal attempt at the end of the half fell short.

Bryant went for it on fourth-and-10 from the North Little Rock 40 when Burnett’s pass to Robert Hendrix was incomplete. The Charging Wildcats kept the ball for nine plays and Jackson made a 38-yard field goal with 3:35 left in the third quarter to close it to 14-13.

After Burnett fumbled the snap on third-and-goal from the one and was dropped for a 3-yard loss on fourth down with 9:48 left in the game, Bryant’s defense came up big when Drake Fowler intercepted Malachi Gober at the North Little Rock 38 with 9:27 left.

Five plays later, Burnett found Singleton, who caught 4 passes for 82 yards, in the back of the end zone for a 24-yard touchdown pass at the 7:40 mark. Fuller’s kick was good and the Hornets led 21-13.

After both teams exchanged punts twice, Jones sacked Gober at the North Little Rock 8 and Graham intercepted Gober and returned it 20 yards for the touchdown to seal the game with 1:17 left.

North Little Rock took a 7-0 lead on its first possession of the game. Marching 71 yards in 12 plays, Gober capped off the drive with a 5-yard touchdown run at the 5:15 mark. Jackson’s kick was good, making it 7-0.

The Charging Wildcats missed a chance to make it 14-0 at the 2:04 mark of the first quarter. After Johnny Lewis returned a punt 66 yards to the Bryant 6, North Little Rock faced fourth and inches from outside the goal line. After a timeout, Torrance Moore’s jump pass to a wide open Braxton Johnson was incomplete.

“That was a play we had been working on and if it works for us, we score a touchdown and go up 14-0, but there’s no guarantee we win the game” said Sandefur.

James said, “That ended up being a big play. I couldn’t see if we tipped it, but we stood up tall there.”

The Charging Wildcats pushed it to 10-0 with 11:02 left in the second quarter on a 41-yard field goal by Jackson before Bryant started its comeback.

“I feel blessed to have made four straight trips to the state finals,” James said. “We’ve been building on a tradition here that started four, five years ago, and it’s nice to see some of our former players back on the sideline and see the current players hold the rope.

“I feel like we have to play a lot better than we did tonight.” Sandefur said, “There were a couple plays here and a couple plays there that could have made the difference. I’m not disappointed. I’m proud of our senior class which has gone 30-8 the past three years. I’ll take that anyway.”