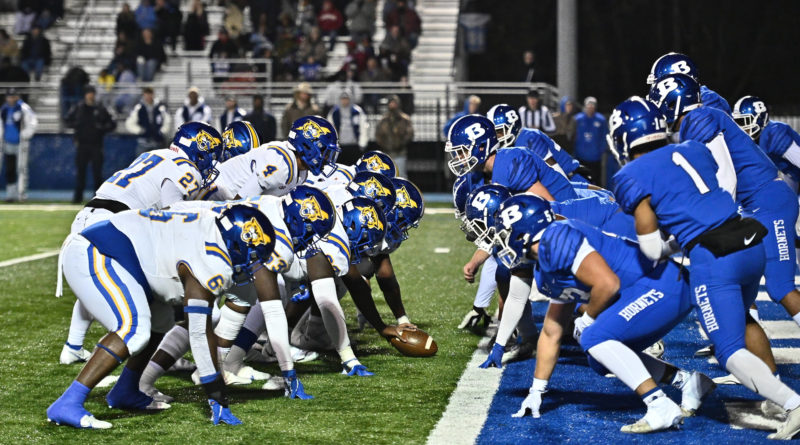 Here’s how the Top 25 Arkansas high school football teams fared in the third week of the playoffs as teams competed for state title game and semifinals berths.

It wasn’t pretty, but the three-time defending Class 7A state champion Hornets found a way to grind out a win with senior end Brandon Jones getting a big sack and junior cornerback Miguel Graham snagging a pick-six to preserve the win and a berth in next week’s Class 7A state title game.

The Bulldogs hold off a Conway rally to sweep two games from the Wampus Cats this season and earn a chance to face Bryant in the 7A state championship game next week.

The Wampus Cats had the lead on the Purple Dogs late but couldn’t hold on and their state title game drought moves to 28 years.

Like their loss last month, the Charging Wildcats again Friday night left points on the field, failing to score again on the Hornets 1-yard line and missing two field goals.

The cross-state road trip didn’t faze the Saints as they jumped out to an early 21-0 lead and again dominated on defense (holding three playoff opponents to a combined 14 points), disarming the Colts’ offense.

The defending Class 5A state champions jumped to a 22-0 lead but had to hold off the Panthers on the road to return to Little Rock to defend their title.

The Patriots couldn’t pull off the sweep of the Bulldogs after blitzing them in the conference opener and fall a game short of the 6A state championship game.

The Bulldogs erased an early 14-0 deficit to rally in front of the home crowd and earn a trip to the Class 5A state championship game.

The defending champion Bulldogs avenge an earlier loss to the Patriots and return to Little Rock next weekend seeking another title.

The Warriors can’t hold on against 5A-Central nemesis White Hall and lose to the Bulldogs for the second straight time this season. Their magical playoff run ends as does their streak of three straight 5A state championship games.

The Wildcats wallop the Patriots for the second time this year and will face the tough task of dethroning Greenwood next weekend.

The Panthers fell behind by three touchdowns early and couldn’t pull off the comeback, ending one of the best seasons in school history.

The Patriots’ improbable run came to a grinding halt when the athletic Wildcats were able to neutralize their offense that had terrorized ranked Jonesboro and Benton teams.

The Lumberjacks didn’t rout the Ricebirds like they did in a September win but survive to host Joe T. Robinson in a semifinal game next Friday that will have a state championship-feel to it.

The Senators enjoy yet another lopsided victory and have disposed of three playoff opponents by an average of 35 points per game.

The Ricebirds hung with the Lumberjacks this time but can’t pull off the road win.

After waxing the Greyhounds 56-6 in the season opener, the Curley Wolves blew out an improved Greyhounds team again, earning a berth in the Class 3A state playoff semifinals.