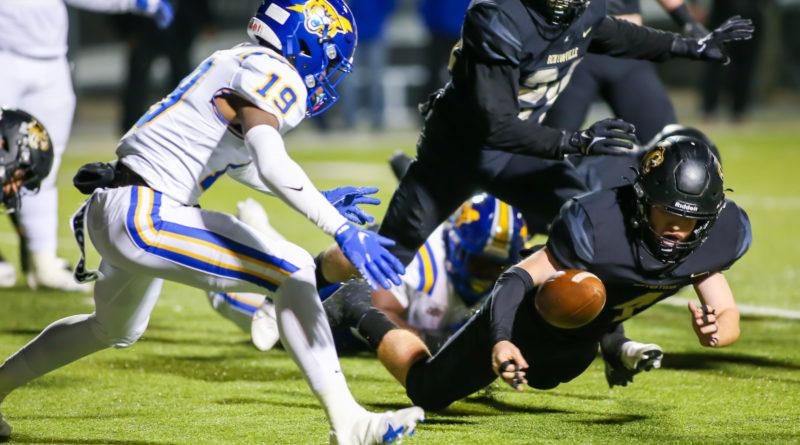 BENTONVILLE — Whereas most Americans relish having the Thanksgiving holiday off this coming week, first-year North Little Rock football head coach Randy Sandefur is thrilled that he has to work on “Turkey Day.”

“We don’t want Thanksgiving off, because it is just so special that our kids get to play another week,” Sandefur said. “And we have a lot to be thankful for, so getting ready to play next week, on Thanksgiving week, is something that – thank the good Lord – is a special opportunity.”

In a game that literally went down to the wire, North Little Rock quarterback Malachi Gober rolled to his right and hit Larry Wilbourn for the game-winning touchdown with 11 seconds remaining on the clock Friday night to give the Charging Wildcats a 24-21 victory over host Bentonville in the Class 7A state quarterfinals.

“We played hard, they played hard, and it was a really up-and-down game both ways,” Sandefur said. “That bunch over there (Bentonville) deserves a lot of credit, and it’s a shame that one of these teams has to go home. This was just one of those ‘flip a coin’ games.”

North Little Rock (10-2) will be putting in its final game preparations on Thursday for next Friday night’s semifinal showdown at top-ranked Bryant – a 42-10 winner over Fort Smith Northside.

Things began a little slow Friday as both teams stumbled out of the gates offensively, each traded punts after three-play opening drives. The punting volley then continued through the first quarter, until early in the second when a 16-yard Tiger punt set North Little Rock up at the Bentonville 41.

The Wildcats needed just four plays to convert the game’s first points, when Gober threw a dart to a crossing Felix Wade for a 7-0 lead with 8:07 left in the first half.

“I knew we could beat them, if we could just come out and executed our plays,” said Gober, who completed 21-of-35 passes for 149 yards and three touchdowns. “Our whole offense just kept working, and we made the plays we had to.”

North Little Rock safety Josh Thrower derailed Bentonville’s next drive, when he picked off a pass and returned it 20 yards to the Tiger 25. But the Bentonville defense dug in and forced a 36-yard Devin Jackson field goal, which put the Wildcats up 10-0 with six minutes to play before halftime.

The Bentonville offense then went to its playmaking receiver Chas Nimrod to quickly get back in the game. The University of Tennessee commit outran the North Little Rock defense for a 58-yard touchdown reception from Carter Nye to cut the lead to three. Unfortunately for the Tigers, Nimrod was held to just two catches in the game for 59 yards.

“Our defense is the heart and soul of this team,” said Sandefur, after watching his Wildcats hold Bentonville to just 79 total yards in the first half. “They stayed after it tonight and did a great job against a really good offensive team.”

North Little Rock controlled the flow of the contest with its running game, racking up 223 yards on 42 total carries. The Wildcats out-gained the Tigers 372-233 in total offense.

Bentonville (8-3) opened the second half with a drive to the Wildcat 19, before turning the ball over on downs. Midway through the third quarter, Tiger defensive back John Thomas Tomescko picked off a Wildcat pass between two receivers to give his team some needed momentum.

Bentonville made the turnover pay off with a 6-play drive that ended with a Cooper Smith’s 29-yard touchdown reception from Nye, giving the Tigers their first lead of the game, 14-10, with four minutes remaining in the third.

But North Little Rock returned the favor on the ensuing possession, as Gober opened the drive with a 19-yard strike to Johnny Lewis, then connected with Lewis again three plays later, on a 21-yard touchdown to put the Wildcats back up, 17-14.

Bentonville seemed to get the big break with just over three minutes left in the game, when Smith returned a North Little Rock punt for a 90-yard touchdown and a 21-17 Tiger advantage.

After a late-hit personal foul penalty against Bentonville on the kickoff, North Little Rock put together an 11-play drive, in which Gober connected on all five of his passes. The final one hit Wilbourn in the hands at the 2-yard-line, as the clock wound down. The nimble junior running back made a shifty spin move and lunged into the end zone for the final points.

“I knew we didn’t have much time left, so as I rolled out to my right, I saw Larry out of the corner of my eye,” Gober recalled. “I was able to get him the ball, and he made a play.”

Sandefur is in his 39 th year of coaching, overall, but is riding high in his first year as the Wildcats’ head coach. His pride showed as he walked off the field Friday night.

“I’m excited for our team, our school, our community, and we’re glad we get to play another week,” he said. “These kids are a family. They’re not black kids and white kids. They are a family, and they play hard for each other. What more can you ask for?”